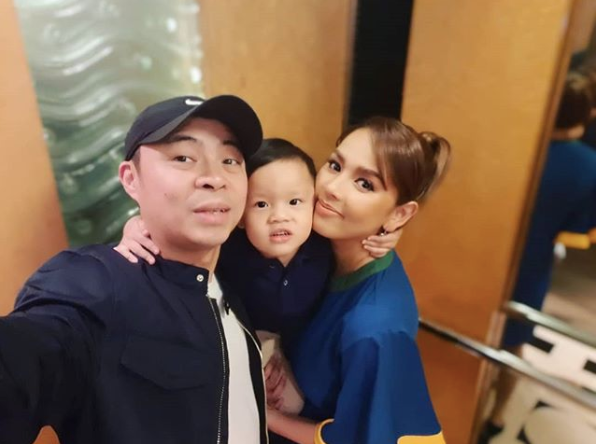 Chito Miranda shares how he and Neri Naig juggle their careers with family life. Image: Instagram/@mrsnerimiranda

Chito Miranda opened up on how he and wife Neri Naig manage to balance life with their son alongside their careers. He reflected on how amidst their hectic schedules, they have been able to achieve a life comfortable for them, even without a nanny.

The “Parokya ni Edgar” frontman recently enjoyed a moment with his wife and son Miguel in their garden, as seen in his Instagram post last Thursday, June 13. He said at times they would harvest vegetables in the garden, paint in the veranda, watch Netflix or go to the zoo.

Miranda said that while it seemed like they had a lot of free time, both he and Naig are busy working parents.

“Neri and I are very busy. I have a band which follows a very punishing gig sked, and I also have several businesses na kailangan tutukan (which need to be looked after).”

He said however that Naig is busier than he is, as she looks after their son along with various businesses, which include bakeshops, a thrift store, a cottage and gourmet tuyo. She also takes care of products such as beddings and sleepwear, which she juggles along with managing her social media accounts for endorsements. Miranda noted too that she lends help to public schools.

“Tapos ang matindi dun, hinahayaan nya pa ako matulog kapag napuyat ako dahil sa gig or sa pagsulat ng kanta the night before,” he said. (What’s more intense is that she lets me sleep when I stayed up because of a gig or from writing a song the night before.)

“Tapos wala kaming yaya!” (And we don’t have a nanny!)

“What I’m trying to point out is, hindi kami parelax-relax lang sa buhay (we’re not taking it easy in life). We work hard, we sleep late, we get tired, and we get stressed sometimes,” he said.

“Pero dahil sa (Because of) [hard work] (and by exerting more effort than what is simply needed), I think na-achieve namin ang gusto namin sa buhay (we have achieved what we wanted in life): which is to work while enjoying ourselves, and to earn just enough to live comfortably, but still have more than enough time for our family.”

“The goal should never be simply to make the most money,” he advised. “The goal is to reach a point in which you make money by doing what makes you happy, and still having enough time to do sh*t you enjoy.”

Miranda and Naig tied the knot in 2014. The actress went from showbiz projects to embracing entrepreneurship with the help of her husband. She began a vlog this year on YouTube called Neri’s Best. JB

How Neri Naig became a successful entrepreneur, as told by husband Chito Miranda

Neri Naig’s tips to be a successful ‘mompreneur’