Jon Stewart lashes out at Congress over 9/11 victims fund 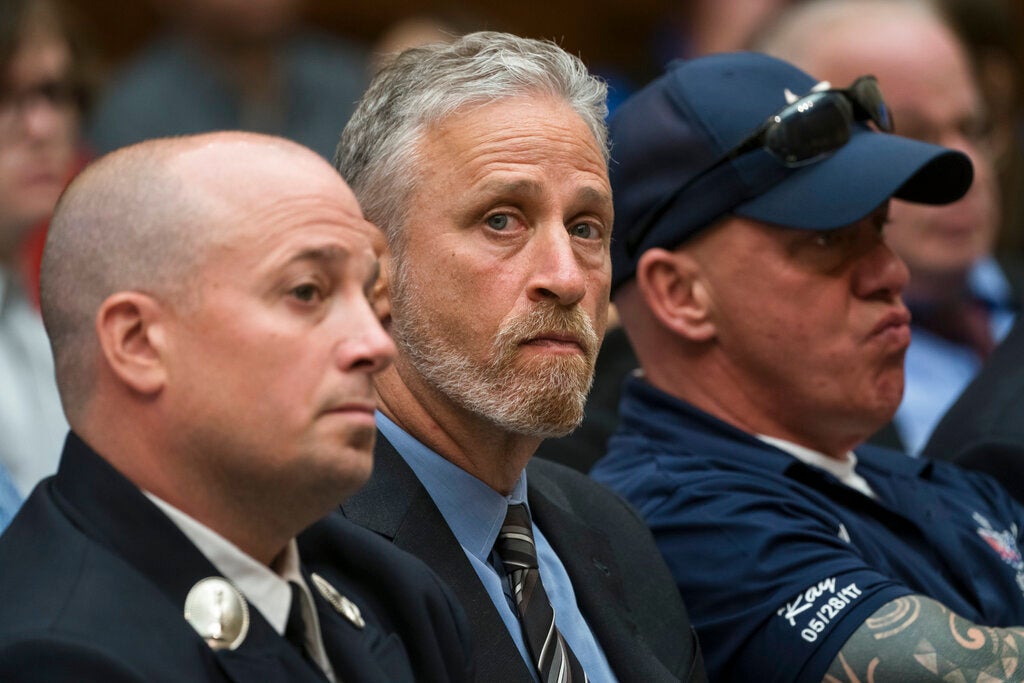 Entertainer and activist Jon Stewart lends his support to firefighters, first responders and survivors of the September 11 terror attacks at a hearing by the House Judiciary Committee as it considers permanent authorization of the Victim Compensation Fund, on Capitol Hill in Washington, Tuesday, June 11, 2019. Image: AP Photo/J. Scott Applewhite

WASHINGTON — Comedian Jon Stewart scolded Congress Tuesday for failing to ensure that a victims’ compensation fund set up after the 9/11 attacks never runs out of money.

Stewart, a longtime advocate for 9/11 responders, angrily called out lawmakers for failing to attend a hearing on a bill to ensure the fund can pay benefits for the next 70 years. Pointing to rows of empty seats at a House Judiciary Committee hearing room, Stewart said “sick and dying” first responders and their families came to Washington for the hearing, only to face a nearly deserted dais.

The sparse attendance by lawmakers was “an embarrassment to the country and a stain on this institution,” Stewart said, adding that the “disrespect” shown to first responders now suffering from respiratory ailments and other illnesses “is utterly unacceptable.”

Lawmakers from both parties said they support the bill and were monitoring the hearing amid other congressional business.

Rep. Mike Johnson, R-La., predicted the bill will pass with overwhelming support and said lawmakers meant no disrespect as they moved in and out of the subcommittee hearing, a common occurrence on Capitol Hill.

Pointing to rows of uniformed firefighters and police officers behind him, he said the hearing “should be flipped,” so that first responders were on the dais, with members of Congress “down here” in witness chairs answering their questions.

First and foremost, Stewart said, families want to know, “Why this is so damn hard and takes so damn long?”

The collapse of the World Trade Center in September 2001 sent a cloud of thick dust billowing over Lower Manhattan. Fires burned for weeks. Thousands of construction workers, police officers, firefighters and others spent time working in the soot, often without proper respiratory protection.

In the years since, many have seen their health decline, some with respiratory or digestive-system ailments that appeared almost immediately, others with illnesses that developed as they aged, including cancer.

More than 40,000 people have applied to the September 11th Victim Compensation Fund, which covers illnesses potentially related to being at the World Trade Center site, the Pentagon or Shanksville, Pennsylvania, after the attacks. More than $5 billion in benefits have been awarded out of the $7.4 billion fund, with about 21,000 claims pending.

Stewart and other speakers lamented the fact that nearly 18 years after the attacks, first responders and their families still have no assurance the fund will not run out of money. The Justice Department said in February that the fund is being depleted and that benefit payments are being cut by up to 70 percent.

“The plain fact is that we are expending the available funds more quickly than assumed, and there are many more claims than anticipated,” said Rupa Bhattacharyya, the fund’s special master. A total of 835 awards have been reduced as of May 31, she said.

“Your indifference is costing these men and women their most valuable commodity: time,” he told lawmakers. “It’s one thing they’re running out of.”

Firefighters, police and other first responders “did their jobs with courage, grace, tenacity and humility,” Stewart added. “Eighteen years later, do yours.”

House Judiciary Chairman Jerrold Nadler, a New York Democrat whose district includes the World Trade Center site, said a 70% cut — or any cut — in compensation to victims of 9/11 “is simply intolerable, and Congress must not allow it.”

Just as Americans “stood together as a nation in the days following September 11, 2001, and just as we stood together in 2010 and 2015 to authorize and fund these vital programs, we must now join forces one more time to ensure that the heroes of 9/11 are not abandoned when they need us most,” Nadler said. NVG

Workers still searching for 9/11 remains in New York, 17 years on