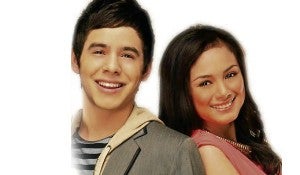 For teen actress Eula Caballero, working alongside an international star like David Archuleta was a “tremendous experience and honor.” But to be appreciated by “Archie’s” fans around the world is something the petite Cebuana beauty still can’t quite digest.

“It’s overwhelming. I’ve been getting fan messages on Twitter from Vietnam, Malaysia, Indonesia, Singapore, and even the US and Canada! I can’t believe it,” the star of “Nandito Ako” excitedly told the Inquirer in a recent press conference held at Baguio Country Club in the City of Pines.

Eula said she was touched after learning that there are a couple of David Archuleta fan clubs that painstakingly upload episodes of “Nandito Ako” with English subtitles on video-sharing sites. The effort allows fans from foreign countries to follow the mini drama series, and get acquainted with Eula and the rest of the local cast.

But Eula also added that she still has a long way to go in terms of acting. “I watch my performances on TV, and look for things that I can improve on,” she said. “Learning never stops. I try to soak everything in, especially when I’m with big stars.”

She also said that there are no big or small roles. She stressed that it’s all up to the actress to make the most out of every role given.

Read Next
‘Bahay Bata’ wins in France
EDITORS' PICK
Metro Manila’s daily COVID-19 growth rate drops to 2% — Octa Research
Over 3 Million worth of prizes to be won at Smart Padala’s SENDali Manalo Promo!
SMDC’s Bloom Residences: A master planned community that cares for your health and wellness
What to expect as Metro Manila starts ‘no vaccination, no ride’ policy on Monday
COVID-19 cases in PH pass 3.2 million mark with 37,154 new cases — DOH
Upsilon, Unilever give ‘real talk’ on climate change crisis
MOST READ
Thailand records first Omicron death
‘Not my loss’: Did Kris Aquino just comment on her breakup with Mel Sarmiento?
Prince Harry sues for UK police protection
Ivana Alawi tests positive for COVID-19, urges public to comply with health protocols: ‘No one’s above the law’
Don't miss out on the latest news and information.