Chris Hemsworth–Thor and now, Agent H–in Bali, which means a lot to him 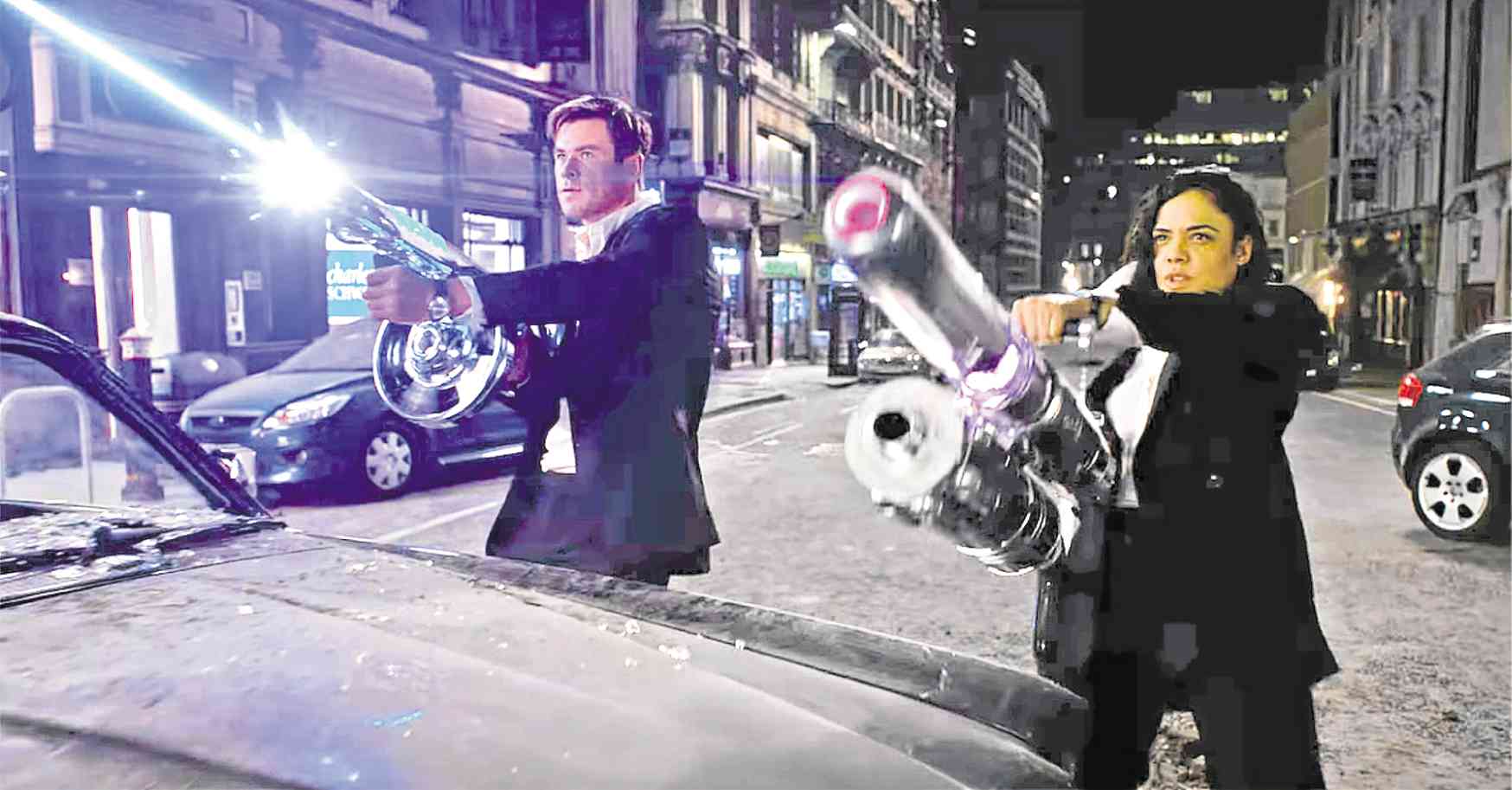 LOS ANGELES—“It might have been a long flight, but, come on, it’s better than the usual junket places,” said Chris Hemsworth, looking fresh and relaxed, befitting our setting, The St. Regis Bali Resort.

“I’m sick of the Four Seasons in LA,” Chris quipped with a laugh. He was dressed for the tropics—white cotton shirt with rolled-up sleeves, light brown chino pants and dark brown loafers (no socks).

It was not the Aussie actor’s first time in this Indonesian island haven. Chris, married to Spanish actress Elsa Pataky since 2010, said, “This is a five-hour flight from Australia. I’ve probably been here four or five times on surf trips. Then I got married here in a little island called Sumba in a place called Nihiwatu, which is a little eco resort.

“So, I love this place. And I learned Indonesian in primary school and high school. When I say learned, it’s about as impressive as my Spanish, which is bad (laughs).”

In director F. Gary Gray’s “Men in Black: International,” Chris and Tessa Thompson don those cool glasses and suits and brandish those memory-swiping neuralyzers for the first time as Agents H and M, respectively. Alien attacks send the pair around the globe, from London to Morocco, Italy and New York.

As in the previous “MIB” movies headlined by Will Smith and Tommy Lee Jones, this spinoff of the hit franchise features aliens, both the adorable and the creepy types.

Only Emma Thompson is back from the sci-fi comedy series, reprising her Agent O role. The rest of the cast include Rebecca Ferguson (Riza), Liam Neeson (High T), Kumail Nanjani (voice of Pawny) and Rafe Spall.

On acting in the scenes with the alien characters, Chris explained, “Usually, it’s with a tennis ball or stick. In this movie, the aliens were actually people in CGI jumpsuits with lights. It’s interesting how that’s changed, from the first ‘Avengers’ and the first ‘Thor’—the evolution of all that.”

Chris talked about working with some actors playing the aliens, including Kumail, whose tiny Pawny character, as his name implies, comes from a race with a chess-based class system. “We had Kumail reading the lines … having him off camera reading them is great. Mostly, we had the actors off-camera reading the dialogue.”

On the inevitable “Does he believe aliens exist?” question, the actor, whose family roots are Dutch, Irish, English, Scottish and German, laughed as he cracked, “My brothers kind of fit into that category. My kids, occasionally, and myself. I’ve been asked a lot during this press tour about my belief in aliens. The optimistic part of myself would like to say yes, just because it’s exciting to think there’s something else out there. You know, I might be one, but we’ll hopefully keep that a secret.”

“Gary, the director, initially had a different villain in the film,” Chris began about Laurent and Larry, whose hip-hop dancing videos have gone viral, appeared in top fashion house advertising campaigns and won in the reality competition series “World of Dance.”

“Gary pitched these guys just for something unique and aesthetically different with the tone, how they moved and so on.

“There was no CGI involved, but it was like watching the best CG. The way they move is alien-esque. They’re the most charismatic, fast-talking entertainers you’ll meet.” 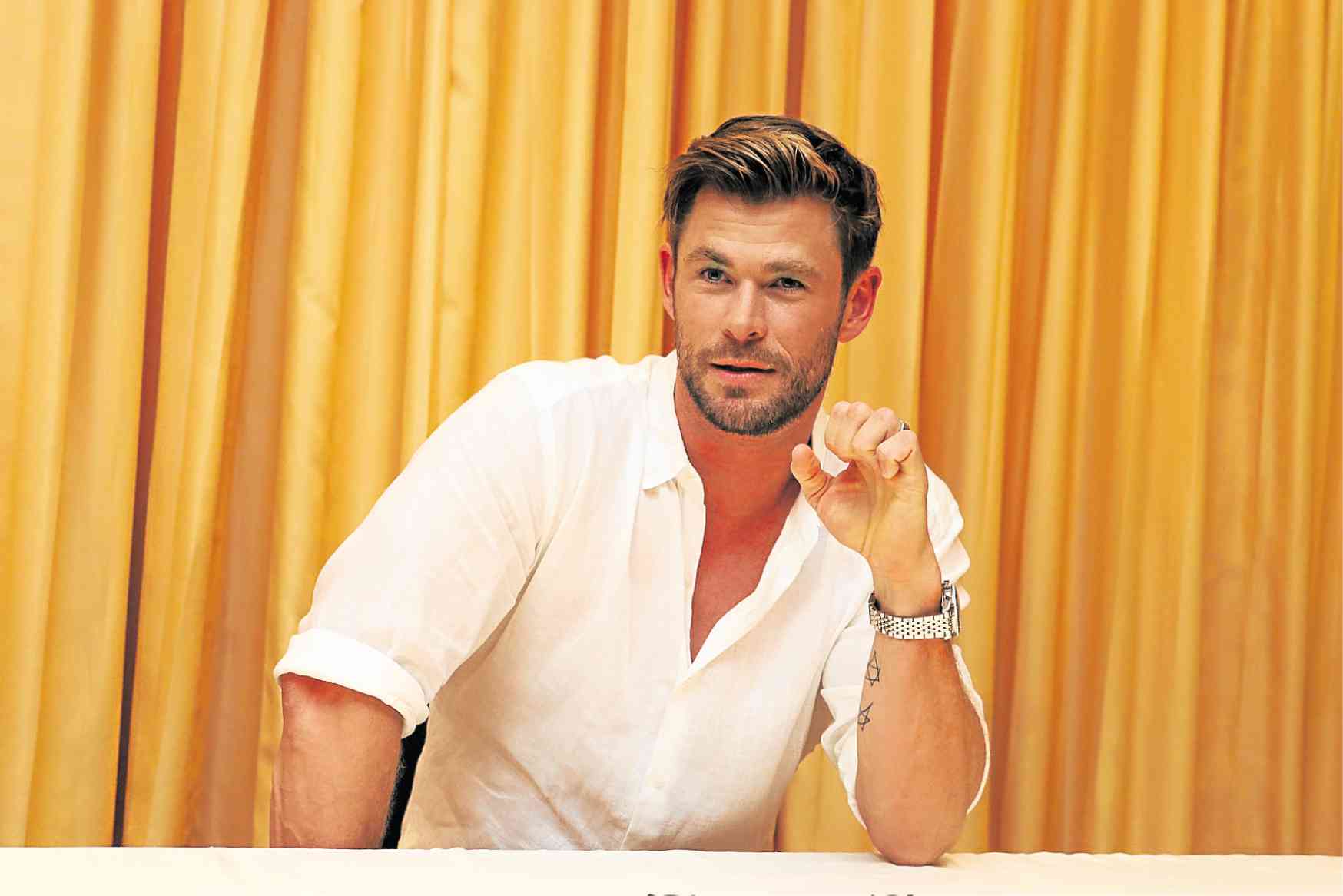 As for retaining the title of the franchise, even though with the inclusion of Tessa as a colead, Chris answered, “We have a fair amount of fun with it in the movie. The casting in itself gives a good nod to that. Then we have a few jokes about it.

“For me, that was another reason for jumping on board. It was something unique and different about what had been done before. We have a nice awareness to the need for change and the change that is occurring. Most of all, or equally as important for me, was working with someone that talented.”

Chris continued about Tessa, who worked with him as Valkyrie in “Endgame” and “Ragnarok.” “I don’t think Thor would have been the character he was in ‘Ragnarok’ without that relationship. And to be able to pick up where we left off and launch into that chemistry that we’d built before was fantastic. We didn’t spend so much of the shooting experience getting to know each other. I liked the fact that this was how it was pitched, and this was the casting approach.”

Wearing the trademark black and white suit was a thrill for the 35-year-old. “We had Paul Smith, thankfully, to design that for us and then fit it for us. That was pretty amazing. I had a nice Paul Smith pair of socks that I wear through the film, which is pretty iconic for him. It was my character’s little extra flair, which certainly wasn’t MIB code, but he bended the rules a little bit.

“With the sunglasses, the same thing. I wanted a little flair in them, but there were certain guidelines we had to stay within. The cars were great. There was an E-Type Jag and Classic Jag that I was able to drive a lot. We had a lot of stunt rehearsals; first tiling out of a parking lot, hand breaking into a setup, which was great.

“It was cool, especially in the action sequence that you see on the street where we’re pulling apart the car—the side view mirror, exhaust pipe, hubcap, and selling the little gadgets and weapons. My car was cool. I was trying to keep it. I thought it would be my wrap present. But I got a [copy of the] script, instead.”

“Going on press tours [like this],” Chris joked with a laugh about what annoys Elsa. They have been married for almost a decade. “It’s always trying to find the balance of working and being with family and so on. I wouldn’t say it annoys her, but that’s a challenge to anyone in this type of business that requires travels this much.

“What annoys her about me? You have to ask her. If she’s listening, nothing annoys me about her (laughs). Got to make sure there’s a place for me in the bed when I get back. Probably if I surf a little long and stay out a little late from time to time. Usually because of traffic, though (laughs).

“What would annoy her? No, I’m perfect. Nothing (laughs). I can’t wait for you to ask her that question, and she’ll just give you a list of things.

“This is like therapy session,” added Chris with his winning boyish grin. “I can be pretty damn stubborn, so can she, which is probably why we tend to butt heads occasionally. But we’ve done pretty well to still be trucking along quite nicely, with those things considered.

“We just have strong opinions. We both have a great amount of enthusiasm for what we believe in. We’ve been building a house for a while now and that’s always fun, isn’t it? I think the vast majority of divorces happen when building a house. So I’m thankful we’ve survived that.

“It’s been interesting deciding on couches and things that I never thought I’d even be bothered about.”