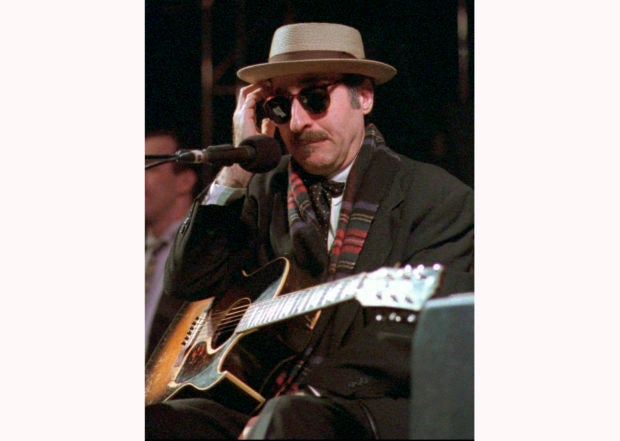 This March 28, 1998 file photo shows Leon Redbone performing at the eighth annual Redwood Coast Dixieland Jazz Festival in Eureka, Calif. Redbone, the acclaimed singer and guitarist who performed jazz, ragtime and Tin Pan Alley-styled songs, died Thursday, May 30, 2019, according to a statement released by his family. No details about his death were provided. Image: The Times-Standard/Patricia Wilson via AP

Leon Redbone, the blues and jazz artist whose growly voice, Panama hat and cultivated air of mystery made him seem like a character out of the ragtime era or the Depression-era Mississippi Delta, died Thursday. He was 69.

No details about his death were provided.

Redbone’s career got a boost in the early 1970s when Bob Dylan met him at the Mariposa Folk Festival in Ontario, Canada, and praised his performance. Dylan said that if he ever started a label, he would have signed Redbone.

“Leon interests me,” Dylan said in an interview with Rolling Stone in 1974. “I’ve heard he’s anywhere from 25 to 60, I’ve been (a foot and a half from him) and I can’t tell, but you gotta see him. He does old Jimmie Rodgers, then turns around and does a Robert Johnson.”

Dylan wasn’t the only one who didn’t know Redbone’s real age since the performer never directly answered questions about his origin or age. Redbone’s publicist confirmed he was born in Cyprus on Aug. 26, 1949, but the Thursday statement announcing his death explained that “Leon Redbone crossed the delta for that beautiful shore at the age of 127. He departed our world with his guitar, his trusty companion Rover, and a simple tip of his hat.”

“I don’t do anything mysterious on purpose. I’m less than forthcoming, but that doesn’t necessarily mean I’m mysterious. It just means I’m not inclined to go there,” Redbone was quoted saying in the press release that announced his death.

Redbone retired from performing in 2015 because his health had “been a matter of concern for some time,” a spokesman for the singer said at the time, and it was “too challenging for him to continue the full range of professional activities.”

He released his debut album, “On the Track”, in 1975, and dropped 16 albums throughout his career.

Most often dressed in a white suit with a string tie, wearing glasses and a panama hat, Redbone performed twice on “Saturday Night Live” in its first season (1975-1976) and was a frequent guest on “The Tonight Show Starring Johnny Carson”.

He voiced Leon the Snowman in the 2003 Christmas comedy “Elf”, starring Will Ferrell, and sang “Baby, It’s Cold Outside”, a duet with Zooey Deschanel, for the film.

Redbone also sang the theme song for the TV series “Mr. Belvedere” and “Harry and the Hendersons”.

A 16-minute documentary about his life aptly titled “Please Don’t Talk About Me When I’m Gone” was released last year. CC