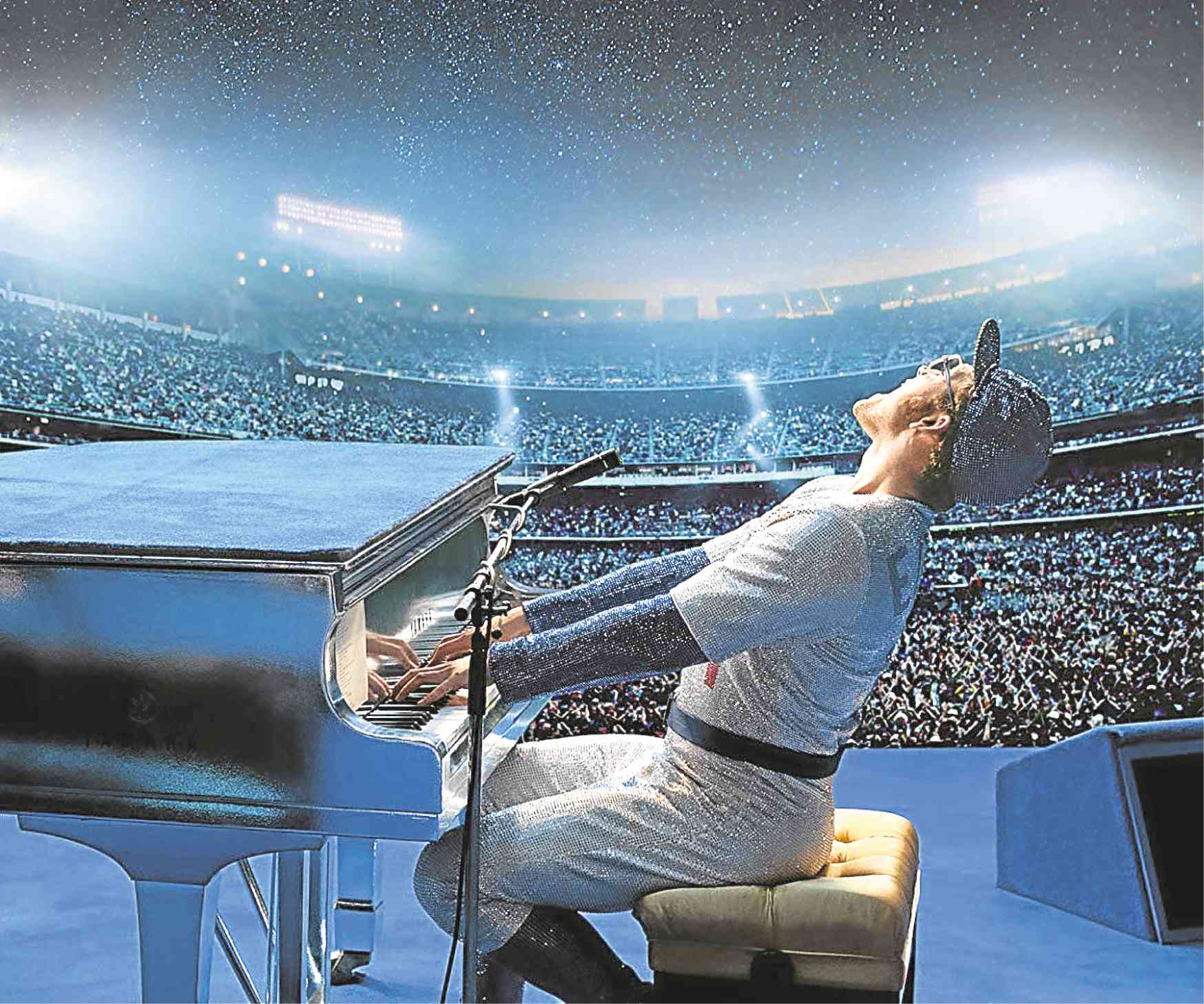 Taron Egerton as Elton John in the movie “Rocketman”

Elton John, the bespectacled boy who found redemption in music then got lost in the madness of pop stardom, has learned to put fame in perspective.

“I had the period when I had my gold records and all the artifice that goes with being successful,” Elton said. “I don’t have them anymore. They’re in a storeroom somewhere.

“If I’m not able to write a song, I just leave it alone. The gift is astonishing. I write other things, musicals with other people, and it’s the same formula. If I have the lyrics, a movie appears.

“Of course, there are times when you doubt your talent. And you think, am I that good enough? No artist, if he has any self-respect, will say, ‘Oh it’s all wonderful all the time.’ It’s not. That’s what makes you better.”

David Furnish, Elton’s partner for more than 25 years, shared a glimpse of the musical artist at work: “Every time he starts an album. I wait for the inevitable call, two or three days into the studio. I get the ‘I don’t think it’s going to come. The world doesn’t want another Elton John album.’ He is crippled with self-doubt.

“It happens at the beginning of every album. He doesn’t write every day. He writes on demand, so he puts a lot of pressure on himself. He goes into the studio with a fresh set of lyrics to create something within a defined period of time.

“Of course, you do,” Elton interjected. “If you don’t question yourself, then you aren’t an artist.”

David said, “Then, once he gets a song or two under his belt, he’s like, ‘I’m on the path now.’ Then, there’s no stopping him.”

It was remarkable to learn from Elton that some of his award-winning and bestselling songs with Bernie were composed in a matter of hours.

In the case of “Your Song,” his first hit single, he composed the music to Bernie’s lyrics in less than an hour.

“Bernie and I have this incredible gift,” Elton said. “He gives me lyrics and I write the melody, and it doesn’t take very long. ‘Your Song’ is a really special moment in the film. It probably took me half an hour.

“I write when I have to write. I have no idea how it happens. I just put my hands on the keyboard, then something happens. 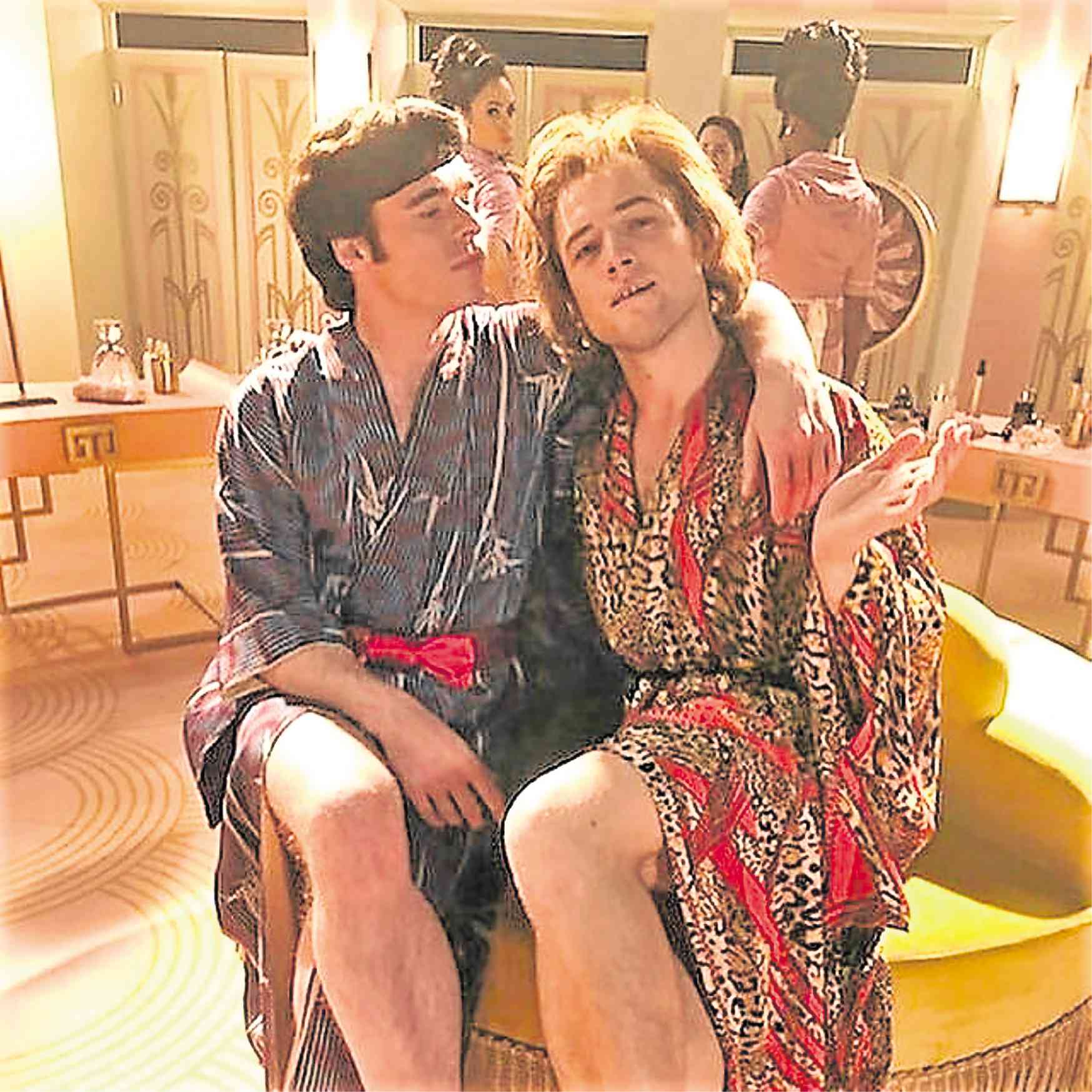 “With the song at the end of the movie, ‘(I’m Gonna) Love Me Again,’ I wanted Bernie to write lyrics for the end credits. I wanted it to be like an end of ’60s, beginning of ’70s Motown song. To be honest, I listened to ‘Come See About Me’ by The Supremes. It’s exactly the same tempo.

“And it’s a bit like ‘Breakin’ Down the Walls of Heartache,’ which is in the film. My early life with the band was playing with those wonderful solo artists. I wanted it to be a kind of tribute to them.”

Despite his restrictive childhood, the musical prodigy in the kid born as Reginald Kenneth Dwight (his stage name was an homage to his early Bluesology bandmates, Elton Dean and Long John Baldry, although the film suggests John Lennon was an inspiration) could not be suppressed. “I started playing by ear when I began playing ‘The Skater’s Waltz (hums),” Elton recounted.

“He was four,” David pointed out.

“Then, I started playing any song that I heard by ear,” Elton continued. “I said to my parents, ‘It would be a good idea if I had some training.’ I found a wonderful woman called Mrs. Jones in Pinner, where I lived. I started to play scales and churning all the exercises. I started to play Bach, Mozart and Chopin, and I loved it.

“I won a scholarship to the Royal Academy of Music. Fortunately, by that time, I had found Jerry Lee Lewis and Little Richard. My hands unfortunately aren’t classical-pianist hands. There were so many wonderful musicians at the Royal Academy who were better than I am.

“You can tell in my early songwriting, probably all the way through, that classical influence has stayed. It was a priceless experience to go there. When I went there in 1958, I was full of fear, because anything other than Mozart and Bach was frowned upon. Now it’s a place of joy—and it’s fantastic.”

The couple’s own kids are also taking piano lessons. “They love it,” the proud dad said. “I don’t think they’re going to turn into me by any chance, but it’s good for them.”

Pressed to name his favorite songs from among many he and Bernie wrote, Elton replied, “My favorite songs change from one bit to the other. There’s a restaurant scene in the film where there was a choir singing ‘Sorry Seems to Be the Hardest Word.’ That song doesn’t mean so much in America, even though it was a No. 1 record there as it was in Europe. Ask me next week, and I’ll probably change my mind.”

“Rocketman” shows how some of those hits were made, as well as the downsides of Elton’s life. “When I wanted to make a movie about my life, I didn’t want it to be a fantasy movie. What happens in the movie is what happened. Success was fantastic, then I couldn’t cope with it. You can’t leave out the bad.

“David made a documentary about me years ago called ‘Tantrums & Tiaras,’ which was true to life. I wanted this movie to be the same. I didn’t want to gloss it over. It’s difficult to watch, but thank God there was redemption.”

David, who is 56, said, “It’s extraordinary to think of how high Elton went, then he went on this long descent into a difficult period of his life. The fact that he has come out through the other end and he’s sober now, that’s an inspirational thing to share with other people.

“Addiction and mental illness are big issues that we deal with in our society today. People are ashamed to talk about them. Actually, the more honest you are about your own experience, it inspires other people.”

Elton, grateful at 72, said that it was primarily music that kept him going amid his struggles: “Even though I was in a terrible state, I was doing a lot of drugs, I still kept working. Music kept me alive. If I had stopped, I wouldn’t be here talking to you right now.”