For Jeff Daniels, ’To Kill a Mockingbird’ is role of a lifetime

Early in the morning on a two-show day on Broadway, Jeff Daniels reluctantly talks about his Tony Award nomination.

He does not want to get his hopes up, so he prefers to “remain neutral” on the nod, his third. As for the role that got him there, well, that is another story. 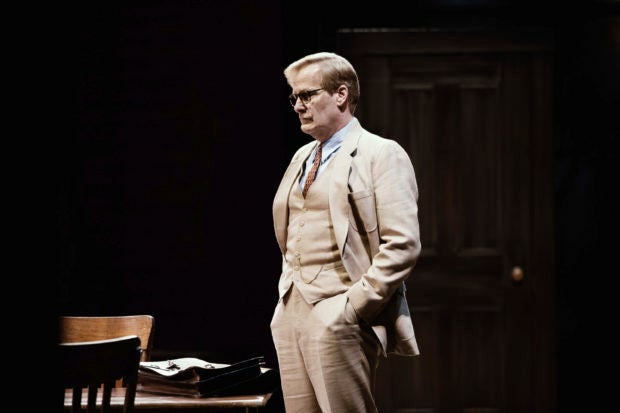 Daniels during a performance of Harper Lee’s To Kill A Mockingbird. Daniels was nominated for a Tony Award for his role in the play. Image: AP/DKC/O&M/Julieta Cervantes

Daniels perks up when the conversation turns to his portrayal of Atticus Finch, the small-town attorney immortalized in the Harper Lee novel “To Kill a Mockingbird”, adapted now for the stage.

Lee chronicled the innocence and tragedy of her childhood in the classic novel, shining a light on the Jim Crow-era South as well as injustice in a small Alabama town.

Nearly 60 years after the novel was published, Daniels sees the play embrace the same values.

“I think the big thing that it did in the ’60s, that it also does now, is it slaps white America in the face,” Daniels said.

The novel won the Pulitzer Prize for literature in 1961, and the film version took home three Oscars, including a best actor award for Gregory Peck.

That pedigree makes stepping into the shoes of Finch a daunting task, one that required a careful balance of research for Daniels.

“I watched the movie once, and then put it away. I read the book once, and again with highlighting Atticus’ stuff,” Daniels said.

That was just the starting point. From there, Daniels immersed himself in understanding 1930s-era Alabama so he could focus on the period, rather than imitating Peck, or, as he puts it, “climbing Mount Gregory Peck.”

Daniels approached it like he was originating the role. “Peck either did the definitive, can’t-imagine-anyone-else-in-this-performance, or he was the only guy who got to do it. So, if you’re going to do it, that’s the approach you have to take and roll the dice and see what happens,” Daniels said.

“It’s the role of a lifetime, and all I’m trying to do is give the performance of my life every night. Because I know what I got. I know how precious this role is, and that’s why I said yes to it for a year,” Daniels said.

Eight times a week, Daniels feels the pulse of the play in front of a live audience. While Jim Crow laws have gone by the wayside, he said the story is still relevant today when it comes to racial bigotry.

“It’s probably as pronounced as racism has been in decades,” he said. “We have to decide whether there is goodness in everyone. Whether there is compassion and generosity and civility and respect for others in everyone. Atticus believes that, and he comes to find out that that may not be the case. And I think as we look around today, that’s an arguable point.”

Noticeably absent from the Tony nominations this season was a nod for playwright Aaron Sorkin, whose script fuels the work. But co-star Celia Keenan-Bolger — who earned one of the play’s nine nominations — said the cast and crew shared their joy with him.

“We’re doing great at the box office, and so many people that were a part of the production were recognized. But, of course, the truth is that none of us would be here if it weren’t for Aaron Sorkin. So, our nomination is his nomination,” Keenan-Bolger said. RGA