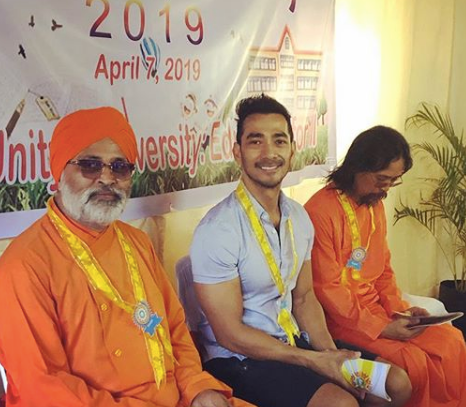 Bagatsing made the revelation recently during a Facebook live interview by the Philippines’ Ulitmate Showbiz Hub on May 27, in which he was asked to share three things his fans didn’t know about him.

Bagatsing, who is a vegetarian, shared that he got on a tantric spiritual path 23 years ago.

“I was initiated by an Indian monk, so tantric meditation, tantric lifestyle…” said Bagatsing. “Ever since then, every day until now, I meditate 2 to 3 to 4 hours a day, in the morning, I mediate an hour, in the the middle of the day, end of the day.”

He added he is a certified yoga instructor and almost became a monk when he was still living in Los Angeles, California.

“I’m also a certified yoga instructor from the US, I don’t get to teach but I practice,” he said. “I almost became a monk when I was in LA, that’s what people don’t know.”

Just last April, Bagatsing attended the moving up exercises of the pre-schoolers of the Ananda Marga School of Nagcarlan.

Bagatsing shared scenes from the occasion such as photos and video clips of the young students performing yoga during the ceremony. Bagatsing was also one of the speakers during the event.

Just a quick message :) It has been such an honour to be part of this revolutionary Pre-School’s progress for the last 10 School years. To have witnessed thousands of Nagcarlan, Laguna, children graduate here has been a joyful inspiration for me. Very grateful, truly. These children emit such quiet confidence, even though, they come from marginalised backgrounds. No sense of inferiority here, friends. :3 Just JOY & LOVE #thejoyofgiving #thepowerofyogathrougheducation

These kids along with their Academic Education, we’re taught Yoga Postures and ‘Quiet Time’ (Basic Meditation) , which they practised daily in their classes. I shall post Vids and photos of them performing these Yoga poses in my succeeding posts. _/\_#yogainfusedeductation #anandamargapreschoolgraduationnagcarlanlaguna

The students, as per Bagatsing, apparently practice yoga daily in their classes.

“It has been such an honour to be part of this revolutionary Pre-School’s progress for the last 10 School years. To have witnessed thousands of Nagcarlan, Laguna, children graduate here has been a joyful inspiration for me,” said Bagatsing then. “These children emit such quiet confidence, even though, they come from marginalised backgrounds.” Cody Cepeda /ra