South Korea on Sunday hailed Bong Joon-ho’s Cannes film festival win for “Parasite”, saying it had left a historic footprint as the first Korean film to win the Palme d’Or. 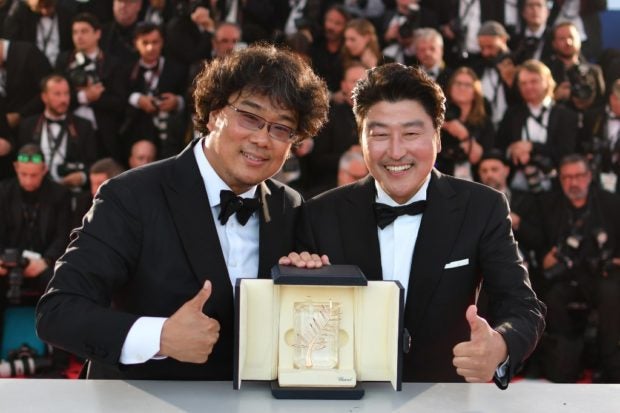 South Korean director Bong Joon-Ho (L) poses during a photocall with South Korean actor Song Kang-ho after he won the Palme d’Or for the film “Parasite” on May 25, 2019 during the closing ceremony of the 72nd edition of the Cannes Film Festival. Image: AFP/Alberto Pizzoli

The top prize win by “Parasite”, a black comedy about a family of clever scammers from South Korea’s underclass, was a unanimous choice by the nine-person jury at the renowned festival.

It was the first big international prize for Joon-ho, the maker of the hugely acclaimed “The Host” and “Snowpiercer”, who became the first Korean in the 72-year history of Cannes to scoop the coveted award.

South Korean President Moon Jae-in congratulated Joon-ho for the prize, adding the passion of the “Parasite” staff had created national pride in the country’s cinema industry.

“I extend my gratitude on behalf of the Korean people,” Jae-in tweeted. “I am very proud of Bong Joon-ho who has risen to the top as one of the world’s best directors.”

Waking up to the news on Sunday morning, South Korean media, critics and fans were ecstatic, with Yonhap news agency reporting that Joon-ho had “finally quenched the thirst” for top recognition at the festival.

The mass-circulated Dong-A Ilbo added, “By winning the Palme d’Or at the renowned Cannes film festival, Joon-ho left a footprint in the history of Korean cinema”.

South Korea had won a handful of prizes at the French festival since 2002 when Im Kwon-taek took the best director award, but had fallen short of receiving the highest honor.

Director Park Chan-wook’s “Old Boy” won the Grand Prix — the second-highest prize — in 2004, and went on to collect the Jury Prize for his 2009 horror movie “Thirst”.

“There was always a lingering feeling that South Korea [had] unfinished homework but with the win, we finally took care of it,” said film critic Ha Jae-keun.

Yoon Sung-eun, another film critic, said, “The regular attendance by South Korean directors who knocked on the door of Cannes in the past was also the driving force of this good news.”

“Parasite” has been distributed to 192 countries ahead of its worldwide premiere, a record for any Korean film.

After its premiere in Seoul on May 30, the movie is expected to open across the globe from June through December.

Jason Bechervaise, a critic based in Seoul, noted the Cannes win guaranteed the movie’s box office success and could pave the way for bigger milestones.

“This is going to generate massive news coverage in Korea days ahead of its release,” he said. “Looking ahead, it’s also got a very good chance of being Korea’s first Oscar-nominated film.”

Fans praised Joon-ho’s accomplishment, saying he had elevated the position of South Korean films on the international stage.

“If an artistic movie can prove its marketability, Korean cinema will be able to take another leap forward. Thank you and well done,” an online user said.

“I screamed with joy very early in the morning! I can’t wait to see ‘Parasite,” another commentator added. RGA/JB