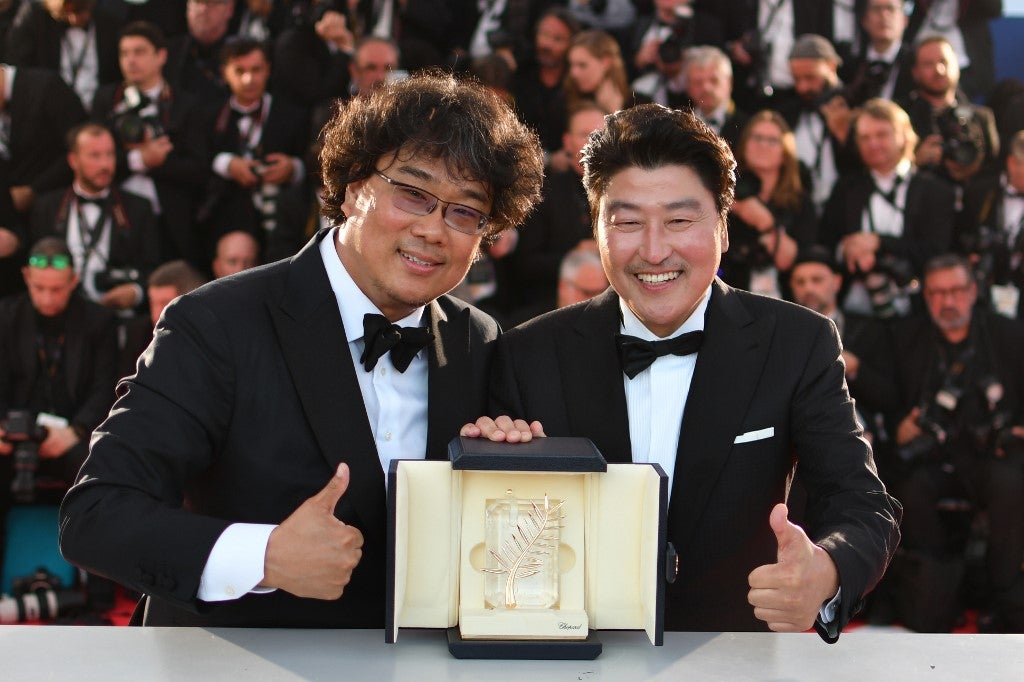 South Korean director Bong Joon-Ho (left) poses during a photocall with South Korean actor Song Kang-ho after he won the Palme d’Or for the film “Parasite (Gisaengchung)” on May 25, 2019, during the closing ceremony of the 72nd edition of the Cannes Film Festival in Cannes, southern France.  AFP

SEOUL, South Korea – South Korea’s Bong Joon-ho has confirmed his status as one of world’s greatest directors with his Cannes film festival win for “Parasite”, a fabulously funny morality tale about the widening gap between rich and poor.

It is the first big international prize for the maker of the hugely acclaimed “The Host” and “Snowpiercer”, who had been the critics’ choice for the Palme d’Or.

Stellar performances from Bong stalwarts including Lee Jeong-eun and Song Kang-ho, as the patriarch of a clan of scammers who latch onto a rich family, blew away audiences at Cannes.

The director called Song his “alter ego” and ushered him onto the stage as he picked up the prize.

He later kneeled in front of the 52-year-old actor and offered him the Palme.

The Guardian hailed Bong’s thrilling black comedy as a twisted “modern-day Downton Abbey… which gets its tendrils in you”.

Yet the soft-spoken 49-year-old Bong hides his gift for biting social satire behind a mild-mannered exterior.

A Korean in Hollywood

With a series of critical and commercial hits behind him, Bong is one of South Korea’s best-known faces, winning multiple awards at home and tellingly making inroads into Hollywood — a rarity for an Asian auteur.

But up till now, major international prizes had eluded him.

Bong is now the first Korean ever to win the top prize at the world’s biggest film festival after he missed out two years ago with his Netflix-produced sci-fi action adventure “Okja”, starring Tilda Swinton.

Once likened by Quentin Tarantino to “Steven Spielberg in his prime”, the director was among the first wave of South Korean filmmakers to blossom after the country’s full democratisation in the late 1980s, which opened the door for a cultural renaissance.

Bong reportedly took part in street protests as a sociology student at Seoul’s elite Yonsei University during the country’s pro-democracy movement in the 1980s, and once told an interviewer he had been arrested for using petrol bombs.

That rage roars through “Parasite”, which Variety’s Jessica Kiang said was “a tick fat with the bitter blood of class rage.”

She said Bong’s “brilliant film is unmistakably, roaringly furious, and it registers because the target is so deserving, so enormous, so 2019.”

Bong was a vocal backer of freedom of expression and opponent of once-commonplace political pressure on artists in his homeland.

His activism saw him placed among more than 10,000 artists who were blacklisted for being critical of ousted former president Park Geun-hye.

But it was his masterful, humorous portrayals of South Korean society, delivered in rich with cinematic allegories, that marked out his talent.

Bong told reporters after picking up his Cannes prize that he likes to write his scripts in a “cafe listening to people talking” so he can stay in touch with how people think.

That engagement with real-life has been there since the start.

His “Memories of Murder” — a 2003 feature film based on real-life serial killings that rattled the nation in the 1980s — was seen as a metaphor for the repressive society of military rule.

The film — also praised for its dark humour — swept all domestic film awards, and is often cited by critics as one of the top 10 South Korean movies ever made.

His 2006 monster blockbuster “The Host” portrayed an incompetent government left helpless in the wake of a disaster. In 2014, parallels were drawn between the film and the Seoul ferry sinking that killed 300, mostly schoolchildren.

“Mother” — a 2009 thriller about the overprotective mother of a mentally disabled boy suspected of murder — was also a huge success.

Both his monster movie “The Host” and “Mother” were shown at Cannes, the latter cementing Bong’s reputation, and he was soon flooded by overseas directorial offers.

Bong’s first US project “Snowpiercer” featured Hollywood heavyweights including “Captain America” star Chris Evans as well as Swinton, who went on to perform in “Okja”.

That movie — about a country girl trying to save a genetically-engineered beast from a greedy multinational firm — also raised debates about factory farming and the brutality of animal exploitation.

“Many people call me a great satirist, but I don’t think I had a choice as a South Korean filmmaker,” Bong told AFP last year. /cbb