PARIS – Moebius, the French comic-book artist whose spectacular science fantasy-based work wrought its magic on Hollywood classics such as “Alien” and “Tron”, has died after a long illness. He was 73. 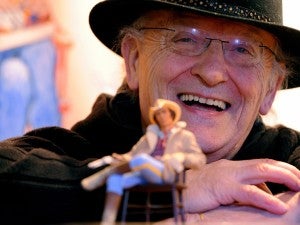 “He died this morning following a long illness,” a friend and colleague told AFP on Saturday.

Such was the appeal of Moebius – or Jean Henri Gaston Giraud – that he won a devoted following as far afield as Japan and the United States, countries working in radically different comic-book traditions.

“The whole profession is in shock, totally devastated, even if we knew that he was seriously ill,” Gilles Ratier, head of France’s Association of Comic-Book Critics, told AFP.

Colleagues paid tribute to the artist and writer generally acknowledged as having been one of the most daring and innovative in his field.

Giraud, who grew up drawing cowboys and Indians, published his first drawings in 1957 and found fame with the western character Lieutenant Blueberry in 1963.

The lean, mean gunslinger was to become one of the most iconic figures in French comic-book history.

He adopted the pseudonym Moebius for his illustrations in science fiction books and magazines.

But he also worked under other pseudonyms, including Gir, Giraud and Moeb.

But as Moebius, he said, he operated on a whole different level.

In 1975, Moebius was one of the cofounders of “Metal Hurlant” (Heavy Metal), a spectacular blend of visually arresting comic-book art that was heavily inspired by the counter-culture vibe from across the Atlantic.

The magazine’s blend of science fiction, epic fantasy and politically incorrect humor, which featured in a 1981 animated film of the same name, provided the perfect platform for Moebius’ far-out creations.

As his reputation grew, he collaborated with US comic-books legend Stan Lee on an adventure featuring the enigmatic The Silver Surfer character.

And in another style entirely, he tackled the story of Icarus with Jiro Taniguchi, a master in the Japanese manga tradition.

His influence also spread into cinema, as he put his visual stamp on the first “Alien” film and the science fiction adventure “Tron”.

In 2010-11 France’s Cartier Foundation for Contemporary Art acknowledged his stature, staging a major retrospective of his work.

“My ambition was tremendous,” he once told AFP. “I wanted to rock, so everybody in the comic industry would be stunned.”

Tributes were quick to come in as news of his death spread.

Fellow artist Boucq told AFP his friend Moebius had been a “master of realist drawing” with “a real talent for humor, which he was still demonstrating with the nurses when I saw him in his hospital bed a fortnight ago”.

Brazilian author Paulo Coelho, whose bestselling 1995 novel “The Alchemist” was illustrated by Moebius, paid tribute to his collaborator on Twitter.

“Your body died today, your work is more alive than ever.”

“France has lost one of its best known artists in the world,” Mouchart told AFP. “In Japan, Italy, in the United States he is an incredible star who influenced world comics.

“Moebius will remain part of the history of drawing, in the same right as Durer or Ingres,” he added.

“He was an incredible producer, he said he wanted to show what eyes do not always see.”