Gemma Whelan on a roll

The 38-year-old actress talks about her unlikely choice to sit on the Iron Throne and playing ‘Gentleman Jack’s’ sister
By: Rito P. Asilo - Entertainment Editor
Philippine Daily Inquirer / 12:30 AM May 25, 2019 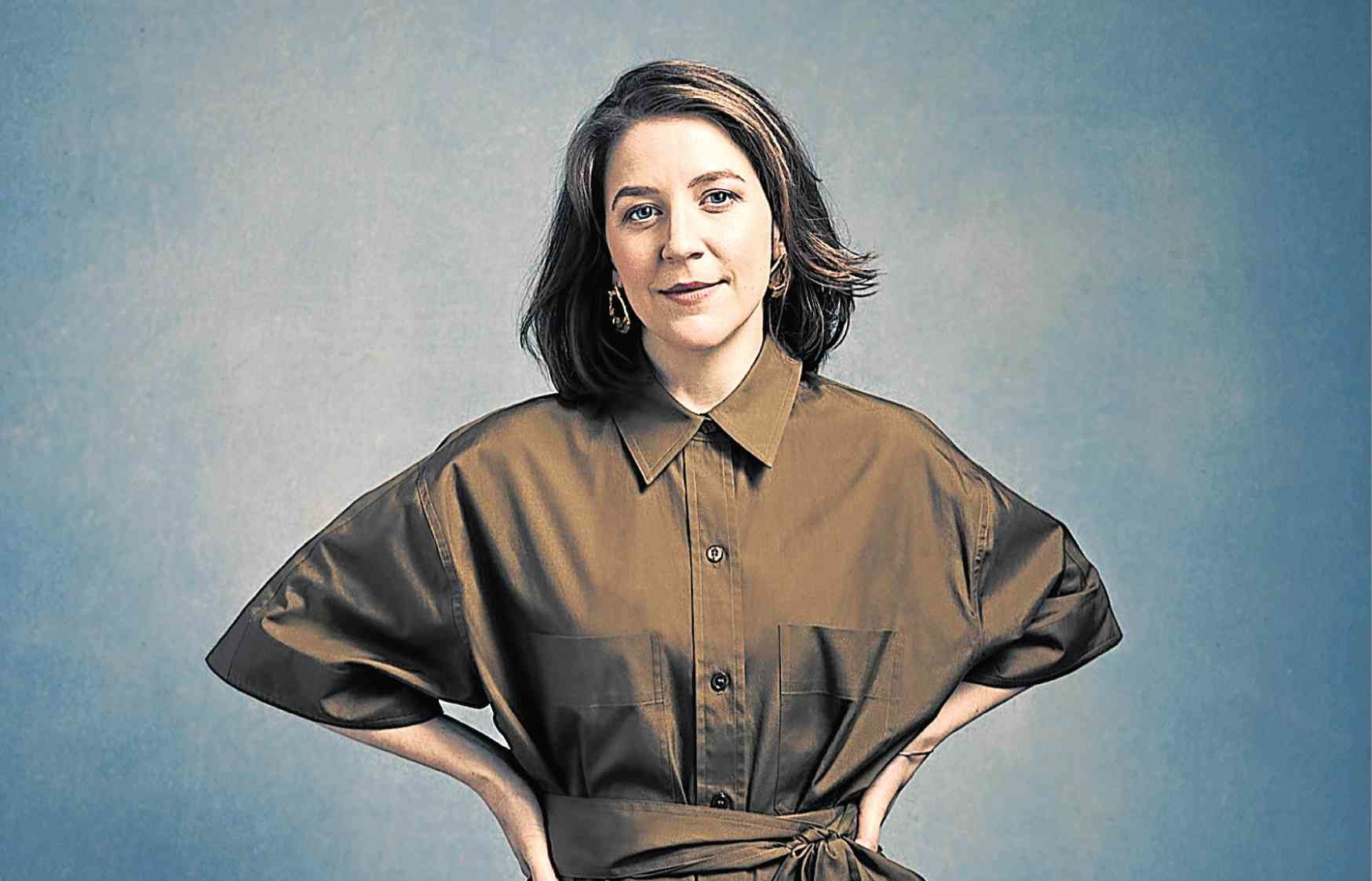 Gemma Whelan is in two of HBO’s critically acclaimed shows that are streaming this season—in “Gentleman Jack,” as lesbian pioneer Anne Lister’s sister Marianne, and “Game of Thrones,” as Yara Greyjoy, Queen of the Iron Islands and Lady Reaper of Pyke. How lucky can an actress get?

But while it was “quite uncomfortable” for Gemma to “physically” transform into Yara and Marianne, the 38-year-old actress said it was a pleasure to breathe life into them.

“If you ask me who is easier to portray, I’d say they’re two very different characters,” she explained in a recent phone interview, before “Game of Thrones” aired its penultimate episode.

“If you work hard and do your job properly, it shouldn’t feel difficult. I enjoyed playing them equally—one has a very heavy costume, while the other is required to wear a corset (laughs). But Yara and Marianne were both a joy to play.” (Watch new episodes of “Gentleman Jack” Tuesdays at 10 a.m. on HBO Go.)

Early this year, when we met Gemma in London for the publicity rollout for “GoT’s” eighth and final season, she told us how she managed to get under Yara’s skin.

“I enjoyed sharing many qualities that I have in myself with Yara,” she mused. “I have her strength, drive, compassion for her family, and her own sense of what is right. And her love for her brother, Theon (Alfie Allen), is another thing that I share with Yara very deeply. But my brother is not quite as wayward as Theon (laughs).”

However, we were taken aback when Gemma was asked which character, living or dead, would she choose to sit on the Iron Throne.

She replied, “I don’t know who’s still alive at this point (laughs). But if Joffrey Baratheon (Cersei and Jaime Lannister’s bastard son, played by Jack Gleeson) comes back to life, I’d pick him. I’ve always liked him.”

If there was one character other than her own that she was emotionally invested in, Gemma said it would have to be Theon, who found redemption at Godswood in the third episode of the last season: He sacrificed himself to save Bran (Isaac Hempstead Wright) from the clutches of the Night King (Vladimir Furdik). 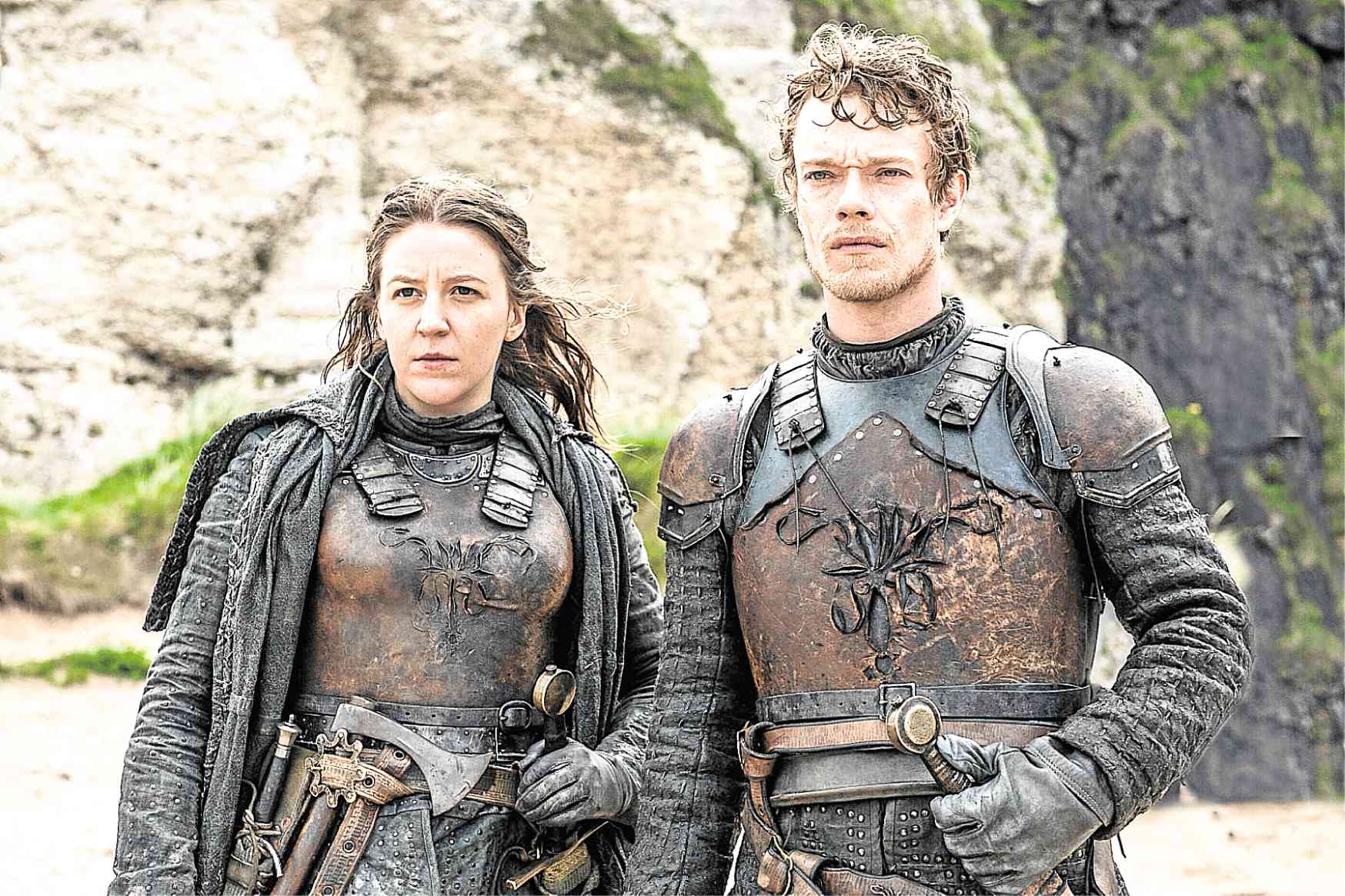 Whelan (left) and Alfie Allen in “Game of Thrones” —HBO

“I like Yara’s complicated relationship with Theon, and how they relate to each other,” she said. “They love each other and had to go their separate ways. But Yara never gave up on her brother. I love that about her, and I admire Theon for being receptive at some point in trying to come back to the family.

“Having said that, I was also lucky to have that connection with Alfie. There are a few actors I’ve had instant connection with. I joined the series in Season 2. But Alfie and I met for the first time on a plane to Belfast, for the read-through.

“I told him, ‘I think I’ll be playing your sister!’ ‘No way, babe,’ he said. We became firm friends from then on and would always look out for each other. In fact, Alfie went to see my play (the Harold Pinter double bill, featuring ‘A Slight Ache’ and ‘The Dumb Waiter’) last week. So, yeah, our bond is forever.”

Excerpts from our phoner and our chat with Gemma in London:

What have you learned from having to create a character like Yara? How has the show changed your life? I have learned about gratitude and pride. I take away an immense sense of pride that I was part of such an incredible show. I’ve also made good friends. At the end of it all, it’s just an acting job, but one that’s very high-profile.

It’s hard to say how it changed my life, because my life continues to be relatively unremarkable in the nicest possible way. I rarely get recognized, and I have a very average, normal “mom life” (laughs). But it certainly helps to have it in my CV. It’s certainly been pivotal.

Has it been easier to get roles after “GoT”? Acting in the series only serves you further, rather than hinders. It certainly opens doors. However, you still have to prove yourself for every role, because you have to be right for it. It certainly helps to have it on my CV.

How was your last day on the “GoT” set? Did you take any of the props after the shoot? I took a pair of my character’s boots, with permission of course (laughs).

My last day was very emotional, which was surprising because I can be rather sanguine about these things. On the actual day that we wrapped up, we were given a gift by the producers, and everyone was given a speech. They were beautifully done to mark such a big moment for all of us.

We were given a framed piece of storyboard from a significant scene involving our respective characters, and they wrote a dedication on the back.

On Twitter, there was a photo of you dressed as Yara breastfeeding your baby daughter on the set. It’s an inspiring nod for working women everywhere. What was it like taking care of a baby while participating in such a huge TV show? Breastfeeding in my Yara costume was very tricky. It isn’t easy to be working and nursing at the same time. But for me, it never felt like a big deal. It was just part of what I needed to do as a mother, and the circumstances that needed for it to happen were provided [to me]. It felt completely normal. I’m just happy I got such a good reaction. It’s very important for people to know that it’s totally OK [to do what I did].

There were a lot of deaths in “Game of Thrones.” Whose demise hit you the hardest? (Chuckles) Catelyn Stark’s death was really, really sad. She was an Everywoman, wasn’t she? We loved her. But the one that hit the hardest was Ned Stark’s—it was quite a shock! 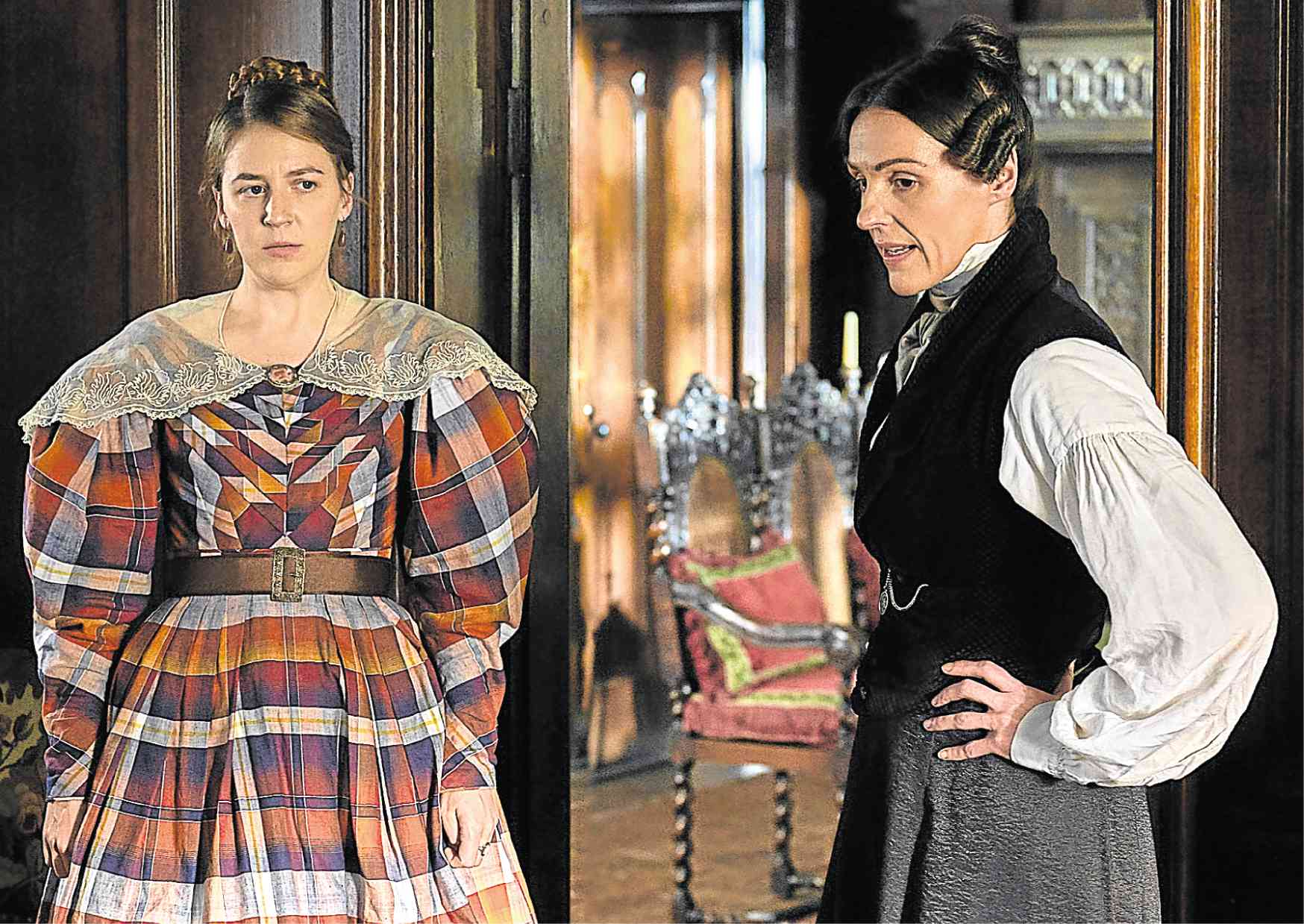 In both “Gentleman Jack” and “Game of Thrones,” you play characters who are always frustrated with their siblings. Can you talk about your chemistry with Alfie Allen (Theon) and Suranne Jones, who portrays the so-called “first modern lesbian,” Anne Lister aka Gentleman Jack? I’ve always been fascinated by the alchemy of skillful casting.
The first time Alfie and I met, we hit it off instantly—now, we feel like we’re already related. It’s magical to discover that we have natural rapport, and the care that we give each other in our lives can only translate well onscreen.

It’s the same with Suranne—we also hit it off immediately. She’s one of the kindest, most hardworking and brilliant women I’ve ever worked with, and I’m truly honored to play her sister. We had a lot of fun because we had to bicker a lot in many episodes. To approach scenes like that, it should be done very well.

“Gentleman Jack” is set in 1832, long before women in the United Kingdom were allowed to vote. What do you think makes “Gentleman Jack” relevant at a time when women are already in positions of power and authority? More than the show being relevant, it’s just a fantastic story.

The entire life of Anne Lister is fascinating, regardless of whether she’s a woman or a man. She was very relevant in her time, keeping the diaries the way she did, and living the secret life she had. And I think Surrane played her brilliantly.

How accurate is “Gentleman Jack,” which is based on a true story. Which portions of it required fictionalizing? I don’t really know because I haven’t read her diaries. I understand that Sally (Wainwright, the showrunner) was true to a lot of the things that happened in Anne’s life.

There were simply a lot of it that you just couldn’t make up: Anne did work in a coal pit, she traveled the world, and she did have those wonderful relationships with women. And she really was married—she lived with Ann Walker (played by Sophie Rundle).

As with in any dramatization of a book or piece of literature, there was artistic license taken. But the most important details are all in there.

What aspects of Yara and Marianne can you relate to? Their strong sense of self and independence—they both know very clearly who they are, what their role is, and what they needed to achieve. Also, they’re both very frustrated about their siblings.

You play a lot of historical characters, fictional or otherwise. Which character or historical figure would you want to sit down and have dinner with? Because “Gentleman Jack’s” themes are so current, I’d like to have a good old chat with Anne (Lister).

I’d ask her what it’s like to be her. Who is she, and what are her personal struggles? I’m going to make her talk.

Fans of “Game of Thrones” are going through something like a withdrawal. What would you miss the most about it? Every year, it was a huge part of our lives knowing that we would have that job coming up … and we would all see each other again. Not anymore.

We all could get slightly sentimental about this, but it’s really not too sad. “Game of Thrones” had to come to an end, and that isn’t such a bad thing. After all, we’ve formed lifelong friendships in that show—and that’s lovely.