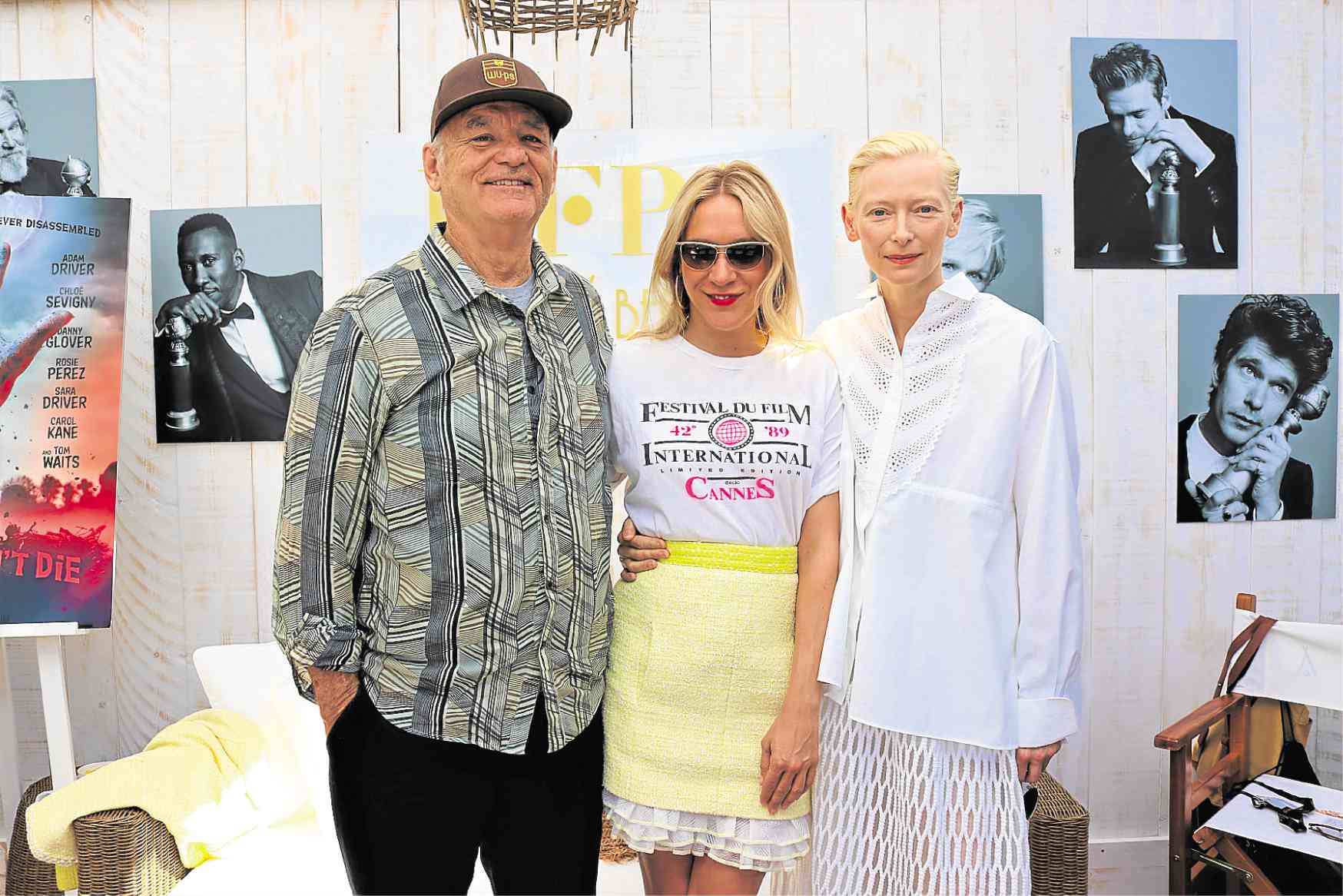 CANNES, FRANCE—“Well, clearly the breakfast,” Tilda Swinton cracked when asked what she enjoys about attending the Cannes Film Festival. It was the morning after her zombie apocalypse comedy with Bill Murray and Chlöe Zevigny, “The Dead Don’t Die,” opened the 72nd Cannes Film Festival.

It was good to watch the three actors eat breakfast bowls of scrambled eggs, sliced avocados, toasted bread and fruits with gusto, like ordinary human beings do. Bill, wearing a UPS cap, was seated on a wicker sofa between Tilda, striking in an all-white ensemble, and Chlöe, wearing sunglasses, tee and yellow miniskirt with white ruffles.

They made for a very interesting trio at Nikki Beach, the posh beachfront pop-up that appears on Boulevard de la Croisette each May when the film festival happens.

“The rosé IV drip in my arm,” joked Chlöe, for her answer about what she likes about the Cannes film fest. The pink-colored wine is ubiquitous at lunches, dinners and parties here on the French Riviera, perfect for the warm coastal weather at this time of the year.

“It’s seeing the giant ships in the harbor and realizing I still have a long way to go,” Bill deadpanned as he gazed at the cruise ships on the horizon. The actor’s much-admired droll delivery of his lines onscreen was on full display in person even this early in the morning.

In Jim Jarmusch’s “The Dead Don’t Die,” Bill and Chlöe play cops in a small town overrun by the undead. Tilda is a funeral home undertaker who swings a samurai sword a la Uma Thurman in “Kill Bill.” “Sssssss,” Tilda demonstrated, with her breakfast knife, her character’s skill in decimating the zombies. The trick, apparently in slaying the walking dead, is chopping their heads off.

“So graceful with that, so beautiful,” Chlöe complimented her costar as she swung the silver knife. “With the help of a slow motion,” Tilda remarked with a smile.

How did Jim Jarmusch sell to you his vision of the zombie film he wanted to do?

Chloë (C): Jim sent me a handwritten letter talking about a ridiculous zombie picture that he wanted to make (laughs) and asked if I would be interested. And this correspondence (with him) started back and forth, handwritten, very romantic. Then, he sent me the script, and that was it. Very straight up.

Tilda (T): He did tell me a few years ago, when we were making our vampire film. He only had to say to me, “Let’s make a zombie film,” and I was in a long time before there was the script. But if he said to me, “Let’s make a musical,” I would be in, and he doubtless will [make one] sooner or later.

Bill (B): He never told me it was a zombie movie. I saw it yesterday for the first time. I don’t know what I’m feeling.

In the movie, the zombies gravitate toward the things they were fixated on when they were alive, like Wi-Fi or hardware stores. If you were a zombie, what would you be walking toward?

B: I don’t have an addictive personality. There’s nothing that I really have to have so much. I just wouldn’t hang out with the zombies. It’s like a clique that I wouldn’t be involved with, like a high school crowd. I would be a loner zombie. I don’t think the zombies would want me.

C: I do have to admit that when the fashion zombie appeared on the screen (laughs), I felt a tinge of relatability there. So that’s awful to admit. But yes, I may have a vintage-clothing addiction. Filling the void sometimes with that mindless kind of thing is pleasurable for me. So I’m trying to figure out what that is and fill that in other ways. A lot of people struggle with that. 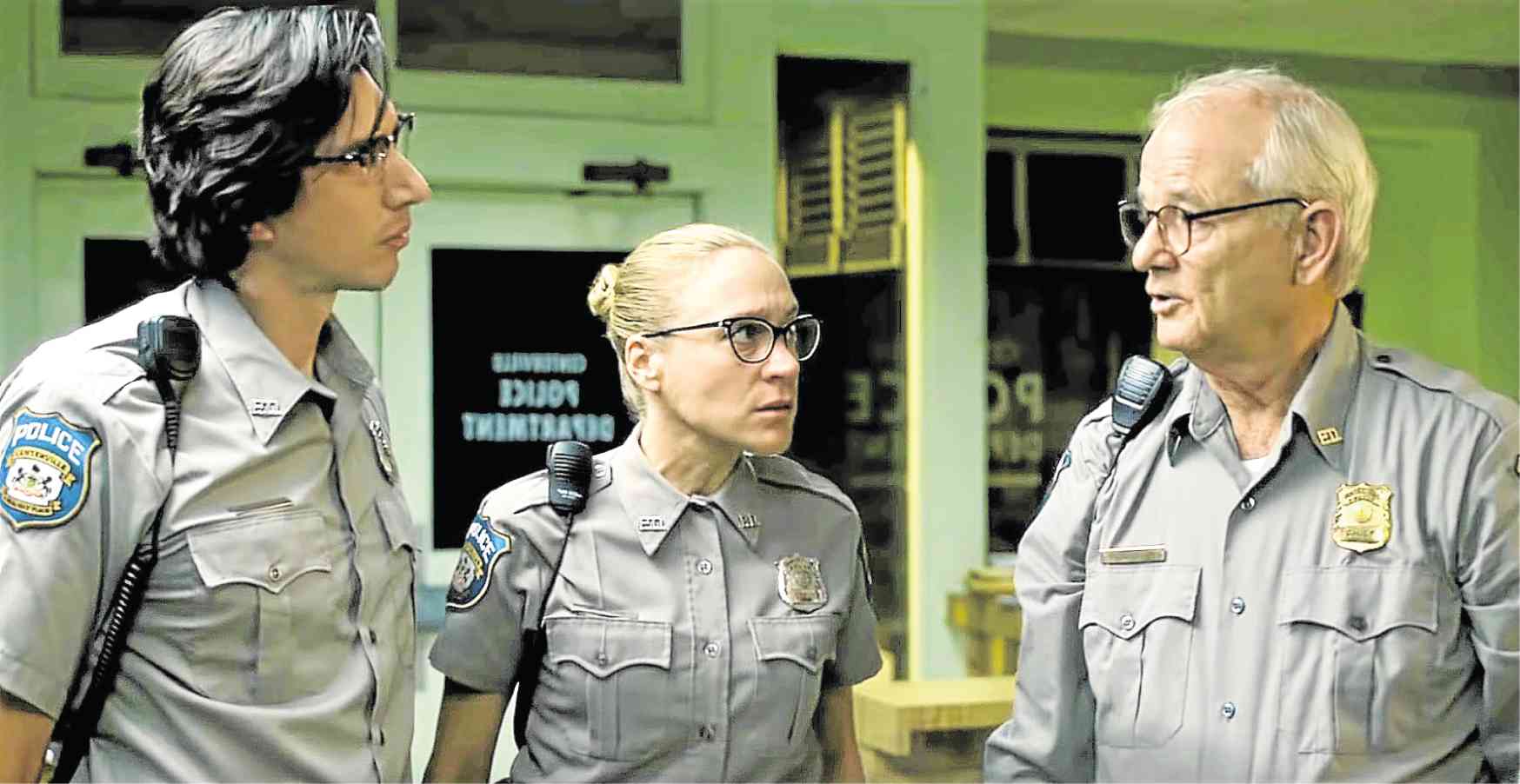 What was the first horror movie that affected you?

T: The first horror movie for me was “Bambi” (laughs). Chlöe, you mentioned “The Exorcist” yesterday.

T: But it’s true, “The Exorcist.” Funnily enough, “The Exorcist” didn’t feel like a horror movie. I was 15 when I saw it, so it felt pretty much like a documentary (laughs).

B: I thought the scariest and most disturbing thing in “The Exorcist” was the spinal tap scene. That was a real thing. That wasn’t even like manufactured horror.

C: Exorcisms are real, and it usually happens to young girls. My priest told me so (laughs).

B: Would you like me to hear your confession?

My first horror movie was “Frankenstein.” Back when I was growing up, they would show horror movies (on television) at midnight. I actually crept in behind the room, and my dad was watching “Frankenstein.” I watched maybe the first 15 minutes or so, and I was terrified. Then, I went back to bed. I never told anyone that I snuck in and watched it.

C: “The Exorcist” was very troubling for me, yes. Especially because I went to my priest. I admitted to him that I was terrified that this was going to happen to me. He said, “Yes, it usually happens to young girls who play with Ouija or practice witchcraft. You’re inviting the devil into your school.” Wise words.

(To Tilda and Chlöe) How do you do it, because you’ve been looking exquisite on the Cannes red carpet and photo calls?

B: Thank you. That’s very kind.

T: Speaking for myself—maybe Chlöe feels the same—I’m just so lucky to have great friends who make great clothes. I am frankly a very shy person. I wouldn’t be able to even be in front of you if I wasn’t wearing something that I felt very fresh in and emboldened by.

And it’s a way of giving you company and when you are wearing clothes by someone you love, like for example, my friend Haider Ackermann, we have a tradition now of always doing red carpets in Cannes. It’s like going up there with your hand in someone’s hand. It’s a way of feeling grounded, authentic and relaxed, which is the only way to be. So, for me, it’s a shyness potion.

C: Yeah. It can be an armor, empowering.

How do you work with your stylist?

C: I’ve never worked with a stylist before. Actually, this is one of my first years to work with somebody. Haley Wollens is a dear friend of mine from New York. I just put myself in her hands, and she came to me with all of these selections. And yeah, it’s been a process. It’s very relaxing to put yourself in someone’s hands who you trust. It has taken a lot of the pressure off of me.

B: I too have never worked with a stylist before. And I don’t see that happening any time soon. But these girls look great. It’s fun that I rumple around in the same kind of outfit, and they change their clothes every couple of hours.

B: Well, there’s documentation. You got more (wardrobe) changes than I have hairs on my head. But they look great. No one is really looking at me particularly. I can slink around, and no one cares.

Read Next
My watch has ended
EDITORS' PICK
LIST: Quarantine status of provinces, cities in PH until July 31
Metro Manila stays under GCQ until July 31
Cebu City status downgraded from ECQ to MECQ until July 31
How Filipinos are embracing digital technology amid the coronavirus pandemic
Water remains our saving grace right now
Win the Samsung Galaxy S20+ BTS Edition at the Smart K-Quiz Night on July 18
MOST READ
Metro Manila stays under GCQ until July 31
ABS-CBN to start retrenchment by end of August, as franchise remains elusive
Defensor dares Tañada to public debate on ABS-CBN franchise issue
Escudero tells Duque: ‘Please just do your job without fooling yourself or us’
Don't miss out on the latest news and information.