Recreating ‘Aladdin’s’ magic with Will Smith and fresh faces

LOS ANGELES — In 1992, Disney transported audiences to the mythical land of Agrabah, where they met a street rat with a heart of gold, a flying carpet, a headstrong princess and a magical genie with some oddly current pop culture references. With the music and lyrics of Alan Menken, Howard Ashman and Tim Rice, “Aladdin” would go on to win the hearts of millions and become the highest-grossing picture of the year.

It was an ambitious animation project that paid off and generated decades of fan goodwill, not to mention the two Oscars and a future Broadway musical. Now, following in the lucrative footsteps of “Beauty and the Beast” and others, the studio is taking another shot at “Aladdin,” this time in live-action. The film, from director Guy Ritchie, opens nationwide Friday.

But how do you recreate the magic of “Aladdin” without the help of a genie’s lamp?

Well, getting a movie star like Will Smith on board doesn’t hurt. Smith agreed to play the Genie. The part was originated by the late Robin Williams, who brought his signature irreverence and wit and modern references to the role. But even with Smith’s bona fides, he was nervous. Williams’ performance has become iconic in the past 27 years. In other words, it would be a tough act to follow. 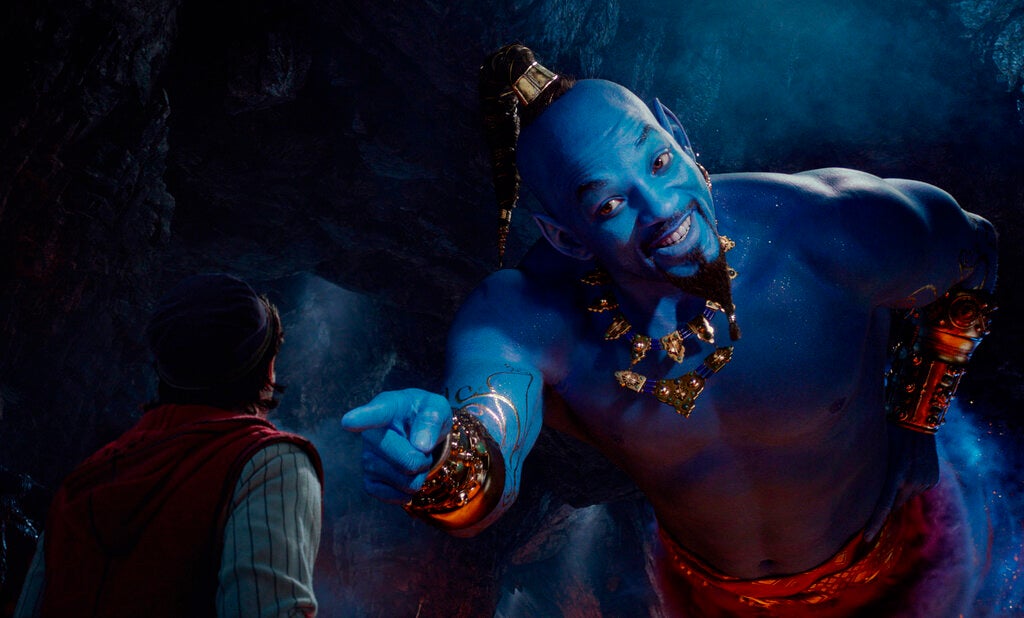 This image released by Disney shows Mena Massoud as Aladdin, left, and Will Smith as Genie in Disney’s live-action adaptation of the 1992 animated classic “Aladdin.” Image: Disney via AP 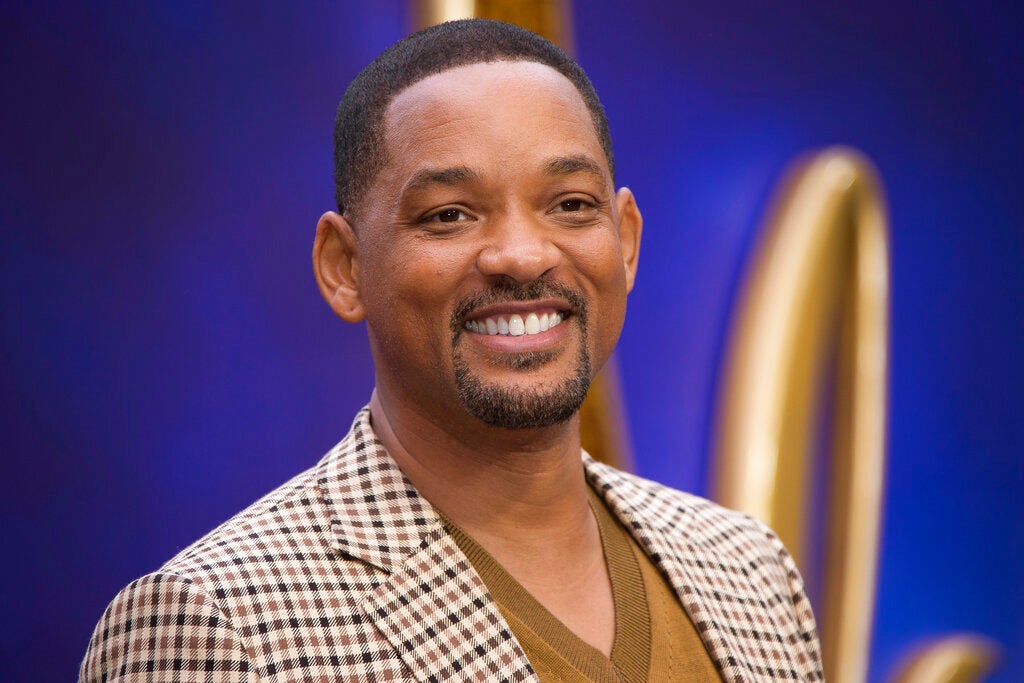 Actor Will Smithposes for photographers upon arrival at the ‘Aladdin’ European Gala premiere in London, Thursday, May 9, 2019. Image: Joel C Ryan/Invision/AP

“It was not a no-brainer,” Smith said. “I was really terrified at first. You know, you have to be careful with these types of films that mark people’s childhoods.”

Smith and the filmmakers knew that remaking “Aladdin ” would inevitably involve a delicate dance of paying homage to the original while also modernizing some aspects of the story, including casting ethnically appropriate leads, who could sing and dance and carry a large scale production, and giving a character like Princess Jasmine more agency.

They found Egyptian-born and Canada-raised actor Mena Massoud to play Aladdin and British actress Naomi Scott, who is of half South Asian descent, to play Jasmine. 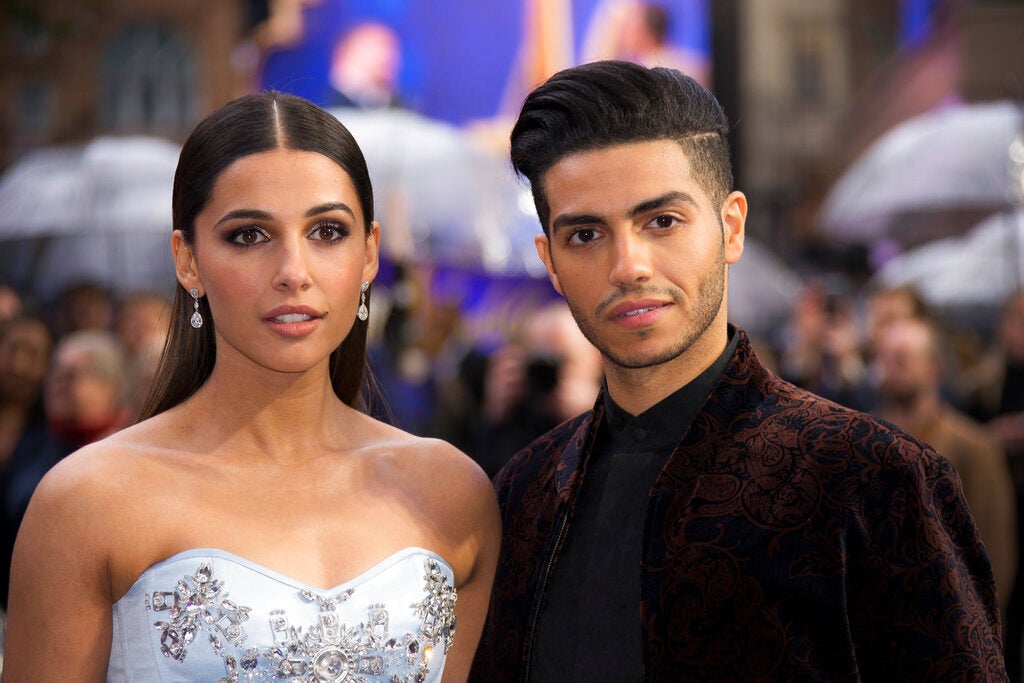 “She was one of my favorite princesses,” Scott said. “I think I gravitated toward her because of her strength and because I felt like I saw myself in her.”

In this film, she’s fighting for equality and the opportunity to succeed her father as Sultan.

“It’s just about her being human and more well-rounded,” said Scott.

She even gets her own empowerment anthem in a new original song called “Speechless,” written by Menken, and fellow Oscar-winning songwriters Benj Pasek and Justin Paul (“The Greatest Showman,” ”La La Land”).

Menken was the bridge between past and present for the production, and said he had to be both the “keeper of the flame of the original” and “part of a new team.”

“When you’re working at Disney you have a lot of people keeping an eye, a very careful eye, on the legacy,” Menken said. “So I am very protective.”

Naturally, the filmmakers wanted to give the production an epic feeling fitting of an overseas action-adventure musical.

“Aladdin” was shot on a massive soundstage outside of London, where the Agrabah set spanned the size of two football fields, and on location in Jordan, including at Wadi Rum. It was not lost on Ritchie that “Lawrence of Arabia” was also filmed there. Since there’s no real city of Agrabah, production designer Gemma Jackson (“Game of Thrones”) used elements of Moroccan, Persian and Turkish architecture as inspiration.

As far as musical numbers go, the biggest production of the film by far is the “Prince Ali” sequence, where Aladdin, with the Genie’s help, enters the city as they think royalty would, boasting of his great wealth, bravery and an assortment of animals including 75 golden camels, 53 peacocks and 95 white Persian monkeys.

Ritchie employed 250 dancers and 200 extras to flesh out the world and commissioned a 30-foot high camel made of 37,000 flower heads for “Ali” to ride in on.

“It’s one of the biggest dance sequences you’ll ever see in a movie. It’s the sequence I’m most proud of,” Smith said. “You got to go check it out. It’s hot.”

While there will be many, many familiar touchstones for audiences from the songs to the score to even some of the dialogue, there are some ways the live-action film had to deviate from the original.

“You cannot have a parrot talking paragraphs in live-action, where you can actually in animation,” Ritchie said. “The mind’s eye seems to tolerate certain exotic indulgences, for example, genies coming out of lamps and flying carpets, but it doesn’t seem to tolerate talking animals, right? So a parrot is allowed to have short sentences but once it turns into paragraphs you go, hold on, what is this?”

With a runtime of over two hours, compared to the animated film’s 90 minutes, there are also additional story elements and a new character in Jasmine’s handmaiden (played by “Saturday Night Live” alum Nasim Pedrad). And it leans into the diversity you’d expect from a story set in the Middle East, which was personally important to Massoud.

But, like all films, its primary goal is to entertain.