Tarantino strikes Cannes gold with ‘Once Upon a Time… in Hollywood’ 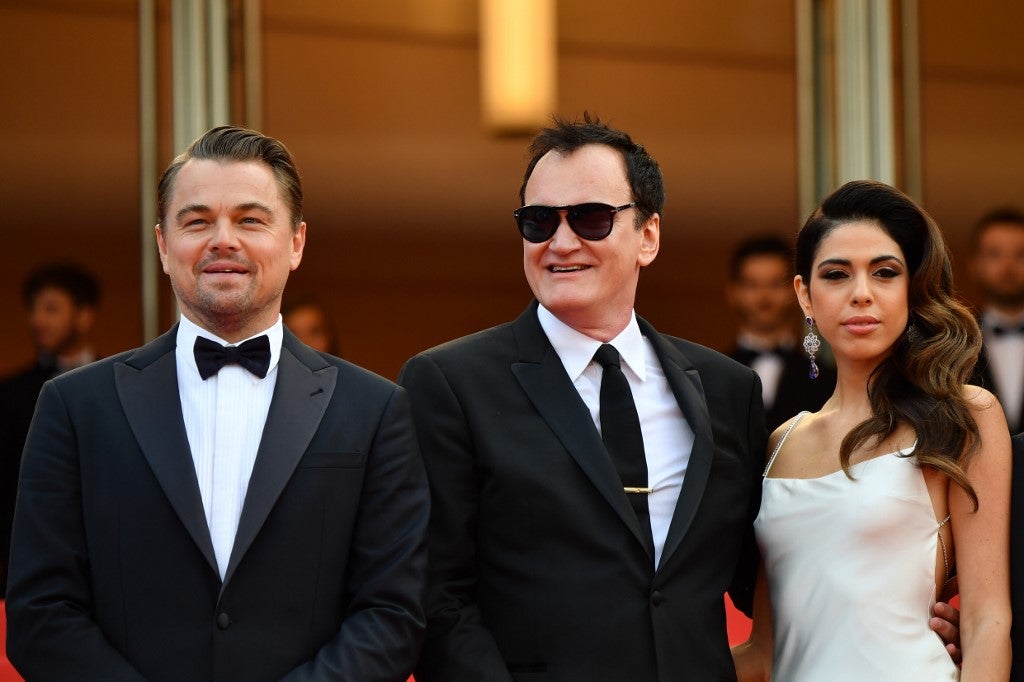 From left, US actor Leonardo DiCaprio, US film director Quentin Tarantino and his wife Israeli singer Daniella Pick pose as they arrive for the screening of the film “Once Upon a Time… in Hollywood” at the 72nd edition of the Cannes Film Festival in Cannes, southern France, on May 21, 2019. AFP

CANNES, France – Quentin Tarantino stormed into Cannes Tuesday with “Once Upon a Time… in Hollywood”, which critics at the world’s biggest film festival hailed as his best movie in years.

They heaped praise on the dark Tinseltown fairytale set in the Los Angeles of 1969 starring Leonardo DiCaprio as a television Western star on the slide and Brad Pitt as his stunt double.

Twenty-five years after the American director won Cannes’ top Palme d’Or prize for “Pulp Fiction”, he got some of his best reviews since “Jackie Brown” in 1997.

Critic Peter Howell of the Toronto Star said that Tarantino wanted “to tell us a story about Hollywood life at the time of the Manson family slayings… and man, does he ever, going from awestruck to WTF”.

“Brad Pitt the standout, his coolest role yet,” he added in a tweet.

The Guardian’s Peter Bradshaw was equally euphoric, calling the film a “brilliant exploitation black-comedy” which “finds a pulp-fictionally redemptive take on the Manson nightmare: shocking, gripping, dazzlingly shot in the celluloid-primary colours of sky blue and sunset gold.”

Deadline declared that it was the “film Tarantino was born to make… gloriously, wickedly indulgent, compelling and hilarious.”

Calls for a sequel already

The online film magazine even called for a sequel.

“The world is a more colorful place in Tarantino’s twilight zone. Round two, please.”

Critics clapped at the end having laughed throughout, but there were none of the standing ovations at the press preview that sometimes greet films at Cannes.

And not everyone was won over by Tarantino’s genius.

Tim Grierson of the industry journal Screen tweeted that “like a lot of recent Tarantino, this is baggy, self-indulgent, fascinatingly its own thing and ambitiously conceived.”

Yet even he conceded that “it’s accomplished, sometimes dazzlingly so” even if “it ends up being as hit-or-miss as his last few”.

There was much more emotion at the black-tie gala screening, with Tarantino doing John Travolta’s two-fingered dance move swipe from “Pulp Fiction” to acknowledge the prolonged standing ovation given by the VIP audience.

British actress Tilda Swinton, one of the stars of “The Dead Don’t Die”, the satirical zombie movie that opened the festival, wiped away tears as she shook the director’s hand to congratulate him.

Earlier, as he walked the red carpet for the premiere, Tarantino compared his film to Alfonso Cuaron’s Oscar-winning “Roma”, saying it is “a memory piece, the way ‘Roma’ was a memory piece… In 1969, Los Angeles was like that.”

The director admitted that “Cannes changed my life” after he brought his first feature “Reservoir Dogs” there in 1992.

“I came here a small independent filmmaker and I left here known by all the critics… and made myself a name as an international filmmaker. And then two years later, my life changed all over again” when he won the Palme d’Or with “Pulp Fiction”.

DiCaprio, 44, told reporters that the film is “a throwback to the type of Hollywood epics we don’t get to see any more.

“It’s about Hollywood and we play outsiders trying to make our way in a changing world in 1969 as the world passes by,” he said.

Co-star and architecture buff Pitt, who is 55 but looks far younger on screen, described the movie as “a love letter to Hollywood and to LA… a city I love.”

Just before the movie was screened, festival director Thierry Fremaux appealed to critics not to give away the plot.

Tarantino made a similar plea Monday, writing a letter that was posted on the movie’s Twitter account begging journalists not to let details slip that might spoil the film for his fans.

“The cast and crew have worked so hard to create something original, and I only ask that everyone avoids revealing anything that would prevent later audiences from experiencing the film in the same way.”

Its stars, including Australian Margot Robbie who plays tragic actress Sharon Tate murdered by Manson cult members, waved to screaming fans as they left the premiere.

DiCaprio was accompanied by his girlfriend, Argentinian actress Camila Morrone, 21, one of the big discoveries of this year’s festival for her stand-out performance in the US indie film, “Mickey and the Bear”.

Audiences will have to wait until July to make their minds about “Once Upon a Time… in Hollywood”, when it will be released in the US. /cbb

Read Next
Hollywood star Fanning faints because of ‘tight dress’
EDITORS' PICK
EuroMillions Superdraw: A lottery draw unlike any other is coming to the Philippines
Smart releases Hyun Bin’s second TVC
Water remains our saving grace right now
‘Justice will be done,’ Duterte assures as he vowed probe on Jolo incident to bare ‘truth’
DOLE: Return of OFWs’ remains from Saudi to be ‘delayed,’ deadline moved to ‘early next week’
Current dominant strain of COVID-19 more infectious than original—study
MOST READ
BREAKING: Duterte signs anti-terror bill into law
Locsin warns of ‘severest response’ if China’s army drills in SCS ‘spill over’ to PH domain
Duterte tells military: No other president looked at you the way I did
‘Very timely, historic’: Senators laud passage of anti-terror bill despite ‘pressures’
Don't miss out on the latest news and information.

TAGS: Cannes, Entertainment, Once Upon a Time in Hollywood, Quentin Tarantino