CANNES, France — Actress Wu Ke-xi has never been raped by an all-powerful movie mogul — as happens in her striking new movie at the Cannes film festival. 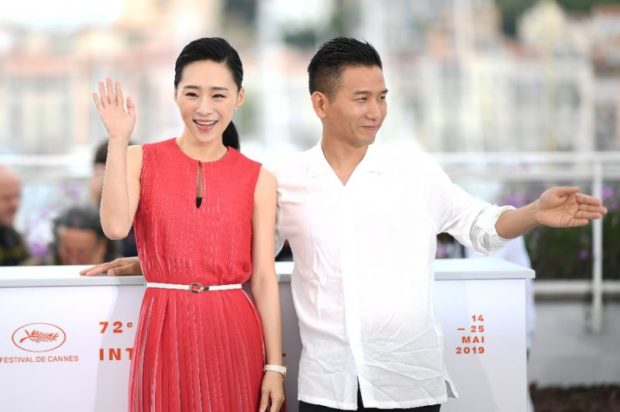 In “Nina Wu”, which was directed by Midi Z, Wu Ke-Xi plays a failing actress so desperate to grab her one chance at fame that she is prepared to put herself through anything. Image: AFP/Loic Venance

But the Taiwanese star knows what it is to be humiliated by a director drunk on his own power.

She will never forget being repeatedly slapped in the face during the shoot of an advert for a mahjong video game early in her career.

Wu was publicly punished for having the temerity to ask the director a question.

“I just wanted to know whether a shot would be a close-up or long shot so I could prepare myself,” the actress told AFP in Cannes, where “Nina Wu” — which she both wrote and stars in — is in the official section.

“The director asked the whole crew to collect all the banknotes they were using in the advert and to bring to him. He made a fan out of them. Then he asked another actor to slap me in the face with them about 30 times.

“It went on and on, him shooting it all in close-up. Everyone was shocked. This wasn’t in the script.”

It was a punishment for speaking out of turn, Wu said.

Hers was only a bit-part, and “someone who is so low class didn’t have the right to ask a question.”

“For the rest of the shoot everyone was stunned.”

Then an odd thing happened. She noticed that the crew began shunning her.

“They had to choose which side they were going to be on, I guess. And nobody wants to get fired.”

Soon she was feeling their hostility at her very presence.

“So they started bullying me too. After that experience I went home and for two weeks I had flashbacks of being slapped in the face.

“I had nightmares and the director’s voice was in my head all the time. I would experience this humiliation over and over again. I would open the fridge to get something but I wasn’t there. I was on the set getting slapped. I wanted to cry all the time.”

Wu had been traumatized. “She had a kind of PTSD (Post-Traumatic Stress Disorder),” said the film’s Myanmar-born director, Midi Z, with whom Wu has worked on the acclaimed “Ice Poison” and “The Road to Mandalay”.

“What happened to me was not very serious,” the actress added. But it got her thinking — “What would women or men who suffer really bad things go through?”

The specter of Harvey Weinstein hangs heavily over the film, the story of a failing actress so desperate to grab her one chance of fame that she is prepared to put herself through anything.

Indeed Wu, who began as a hip-hop dancer and endured “some crazy years” before her own career took off, started writing it after the Hollywood mogul’s fall.

“I kept wondering what happened in those rooms. I was so shocked and curious,” she said as scandal after scandal broke in Hollywood, South Korea and Japan.

In Taiwan itself, one of the country’s most acclaimed directors, Chang Tso-chi, was already behind bars for raping a scriptwriter. And in February another major industry player, actor-director Doze Niu, was charged with sexual assault.

But it was the appalling cases of a series of South Korean actress that really haunted Wu. In particular, that of Jang Ja-yeon, whose suicide in 2009 after she was abused by the head of her studio, was initially covered up.

What chilled Wu was some actresses were attempting suicide 10 years and more after the abuse happened. “You would think that surely when the thing is finished that would be it.

“But no, it went on tormenting them for all those years — that’s the thing with PTSD — and that’s what made them decide to kill themselves such a long time after.”

Midi Z said the film industry in Asia is probably no better or worse in terms of abuse than anywhere else.

“People tend to be polite,” yet if something did happen, there is not much of a culture of speaking out, he admitted.

“This is not based on anybody, it is a fiction, a drama, but the feelings are real.

“I wanted the audience to be right in the character’s head and to feel what she does, all the subtle sounds like the (film producer’s) boiling kettle that stick in people’s heads, and trigger their trauma when she hears something similar.

“If that freaks people out, then I’m happy,” he added. RGA