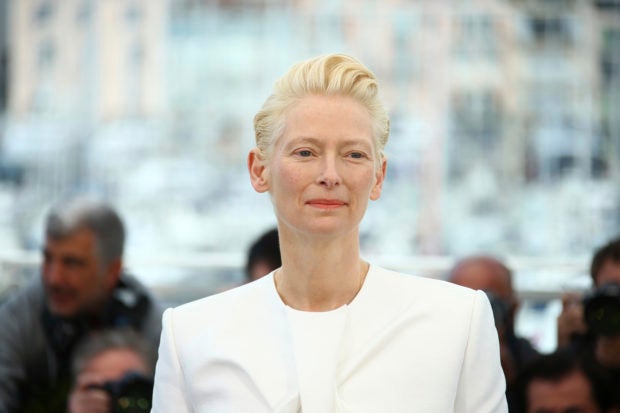 Tilda Swinton feels most at home at the Berlin Film Festival, but she’s steadily become a regular at the Cannes Film Festival.

“I’m racking them up,” she says cheerfully the day after the premiere of Jim Jarmusch’s zombie movie “The Dead Don’t Die”.

But Swinton is nostalgic for one aspect of the festival that has waned in recent years: “the Troma-ness of Cannes,” she says, alluding to the once ubiquitous Troma Entertainment, the aggressively promotional indie factory of low-budget exploitation movies.

“You don’t get assaulted by people dressed up like life-sized penises like you used to,” says Swinton. “That used to be great.”

“The Dead Don’t Die”, which is competing in Cannes for the Palme d’Or, isn’t a Troma film by any stretch. But it shares some genre DNA. Jarmusch’s film is about a small town named Centerville where “polar fracking” alters the Earth’s rotation and the undead begin to walk the streets. Swinton, who memorably starred as a thoroughly well-read vampire in Jarmusch’s “Only Lovers Left Alive”, plays the town’s mortician.

“At some point at the end of our adventure with ‘Only Lovers Left Alive’, Jim said, ‘Let’s do a zombie movie next,'” she recalls. “He said, ‘What do you want to be?’ I said, pretty much off the cuff, ‘I want to be the funeral director who’s put out because the dead don’t die.’ That was it. He laughed and went away. And then all the rest, he did.”

For even Swinton, the character is an eccentric one. She speaks with a pronounced version of her own Scottish accent and is a master swordsman. Swinton, finally, is zombie-killing Scottish samurai warrior.

There are winking references throughout the often meta “The Dead Don’t Die” to the actors themselves — among them Bill Murray, Adam Driver and Chloe Sevigny. Swinton’s character is named Zelda Winston, a riff on Jarmusch’s nickname for Swinton: “Swilda Hinson”.

“Everybody’s in their own clothes,” she says.

As purposefully outlandish as much of the movie is, its premise — where the planet is horribly damaged and a strange new-normal takes hold — doesn’t sound far-fetched to Swinton.

“It could easily be a documentary, if we’re not careful. We’re getting used to really bad things happening that we couldn’t imagine,” she says. “We’ve just all got to retain perspective. It’s so easy to become befuddled. And it’s so easy to notice that some forces are actively befuddling us.”

Swinton recently narrated Mark Cousin’s “Women Make Film: A New Road Movie Through Cinema”, a four-hour documentary (for which 12 more hours are planned) that sheds light on many of the underappreciated female filmmakers from throughout cinema history. Speaking to reporters Wednesday, Swinton referenced that past as an important perspective in today’s gender equality struggles.

“Women have been making films for 11 decades now,” she said. “There are countless films out there. Why don’t we necessarily know about them? We have women filmmakers. Some are working in bars, some are still in school, some can’t get into school. But that’s where we need to start. We need to look at the canon, appreciate it, stream it. Then it will exist amongst us.”

One new addition to that canon may be Joanna Hogg’s “The Souvenir”. The film, which opens in U.S. theaters Friday, stars Honor Swinton Byrne, Swinton’s daughter, in her film debut. Swinton plays her mother. Hogg’s widely acclaimed film — a second part of which is planned — is drawn from her own experience as a film student, her own deferred coming-of-age of a filmmaker.

“What she’s doing has such a purity,” says Swinton. “She started making her own films 20 years after making films as an assist director in TV. Because of experiences of these films, she didn’t have the confidence to be an author and yet she’s hit the ground running.”

Swinton, ever loyal to her directors, will be back in Cannes for the premieres of Bong Joon-ho’s “Parasite” and Quentin Tarantino’s “Once Upon a Time in America”. Next year, she says she hopes to return again with “Memoria”, from Thai director Apichatpong Weerasethakul. CC