‘Half man, half god’ Maradona is king of Cannes

PARIS, France — Diego Maradona is sure to cause a stir when he turns up next week at the Cannes film festival for a new documentary about his jaw-dropping life by the Oscar-winning maker of “Amy”. 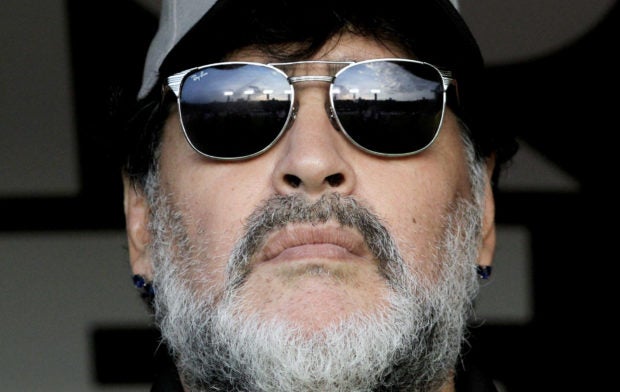 It is only one of a wave of new works about the flawed Argentine football genius that include a just-wrapped Amazon biopic series that follows every step of his dramatic rise and fall.

The poster for Asif Kapadia’s striking documentary “Diego Maradona” also pulls no punches, calling him both hero and a “hustler.”

Yet Maradona will still walk the Cannes red carpet for the man who won plaudits and prizes for his insight into the life and tragic death of singer Amy Winehouse.

Brad Pitt, Leonardo DiCaprio, Bono and Iggy Pop will climb the same carpet during the festival, which starts Tuesday, but few if any of them can draw the crowds or the passion as the short man born in a Buenos Aires shantytown.

It is this complex yet unshakable adoration, forged in Maradona’s frequent flirtations with death, that drew Kapadia to his story.

After his acclaimed portrait of the Brazilian Formula One ace Ayrton Senna, who lost his duel with death at 34 as he was leading the San Marino Grand Prix, the filmmaker said he had to steel himself to tackle another sporting hero who lived life on the edge.

Despite swearing never to make another sports film after “Senna”, Kapadia caved in when he discovered a cache of footage from Maradona’s mythic period playing for Napoli.

Partying with the Camorra

“It was infamous,” he told a documentary conference in Copenhagen earlier this year, with some sequences showing the player partying with dons from the Camorra, the Neopolitan mafia.

They were meant to go into a 1991 documentary that was never shown.

“We managed to get our hands on them and thought, ‘He is really interesting and his journey is incredible.’ What he gets up to, and what happens to him, has much wider themes,” Kapadia said.

Maradona also agreed to talk, sitting down for three long interviews because “he liked ‘Senna’. That was one of the reasons we were able to get through the door.”

Kapadia, who has invented his own genre of “true fiction” documentaries, concentrates on Maradona’s Naples years, the most operatic part of his career.

Between 1984, when he was welcomed to the city by 70,000 fans, to 1991 when he failed a drugs test because of his cocaine habit, Maradona’s magic left foot won the club two Serie A Italian championships and his “hand of God” goal put England out of the World Cup in 1986.

But Kapadia said he was just as interested in Maradona after his fall.

“After two films about people who tragically died young I wanted to test myself with somebody who is still around. It’s a different type of story — of what happens when you get older if you’re a star.”

Like Senna and Winehouse, Maradona is “another person who felt like he was fighting a system,” Kapadia insisted.

Maradona’s status as “half man, half God” has drawn director after director to his rollercoaster life story.

Two-time Cannes winner Emir Kusturica, who tackled him in his 2008 documentary “Maradona by Kusturica”, identified three Maradonas: “The football teacher, the politically incorrect citizen and the family man.”

Italian Oscar winner Paolo Sorrentino created an unforgettable image of the ravaged hero in “Youth”, his movie on aging, with an overweight Maradona lookalike in an oxygen mask doing kick ups with a tennis ball.

That tragic but defiant figure is the heart of a new Maradona play in Paris based on a book by Argentinian writer Alicia Dujovne Ortiz, where this “demigod tries to escape destiny for something worse”.

The big-budget Amazon series “Maradona” — which will go out later this year — follows the “Golden Boy” from the cradle through the highs and lows of his career at Sevilla, Barcelona and Napoli, with a relay of actors playing Maradona through the ages.

All eyes at Cannes will be on how the hugely unpredictable icon performs before the eyes of the world, having made headlines at the last World Cup in Moscow with his antics in the stands.

Never one to avoid the grand gesture, he dedicated a recent victory of the Mexican club he manages, Dorados de Sinaloa, to the Venezuelan leader Nicolas Maduro, who has just survived a coup attempt.

Maradona had previously fallen asleep during one of Maduro’s speeches and had to be woken when the cameras turned to him when the president praised him. RGA/JB

PH only Asian country to be featured in Cannes Producers Network