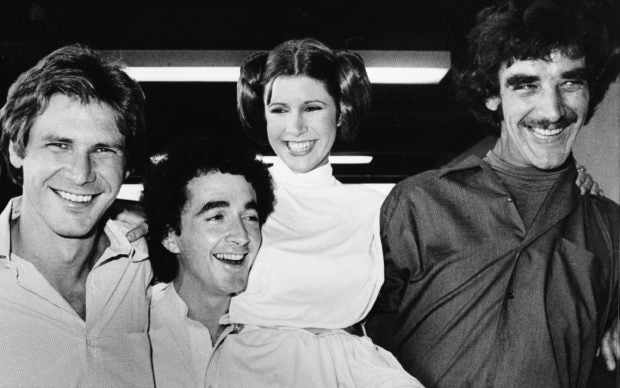 In this Oct. 5, 1978 file photo, actors featured in the “Star Wars” movie, from left, Harrison Ford who played Han Solo, Anthony Daniels who played the robot C3P0, Carrie Fisher who played the princess, and Peter Mayhew who played the Wookie, Chewbacca, are shown during a break from the filming of a television special presentation in Los Angeles. Mayhew, who played the rugged, beloved and furry Wookiee Chewbacca in the “Star Wars” films, has died. Mayhew died at his home in north Texas on Tuesday, April 30, 2019 according to a family statement. He was 74. No cause was given. Image: AP

An outpour of reaction came after the death of Peter Mayhew, who played Chewbacca in five “Star Wars” films and was beloved by the franchise’s fans:

“Peter Mayhew was a kind and gentle man, possessed of great dignity and noble character. These aspects of his own personality, plus his wit and grace, he brought to Chewbacca. We were partners in film and friends in life for over 30 years and I loved him. He invested his soul in the character and brought great pleasure to the Star Wars audience.” — Harrison Ford, who starred opposite Mayhew in four “Star Wars” films, in a statement.

“He was the gentlest of giants-A big man with an even bigger heart who never failed to make me smile & a loyal friend who I loved dearly-I’m grateful for the memories we shared & I’m a better man for just having known him.” — Mark Hamill, who starred opposite Mayhew in the original “Star Wars” trilogy, via Twitter.

“Peter was a wonderful man. He was the closest any human being could be to a Wookiee: big heart, gentle nature.and I learned to always let him win. He was a good friend and I’m saddened by his passing.” — “Star Wars” creator George Lucas, in a statement.

“Studying the character he helped create was always a daunting task, but one that was made easier by his tutelage and kindness as we sought to bring Chewbacca to life for a new generation. He was an absolutely one-of-kind gentleman and a legend of unrivaled class and I will miss him.” — Joonas Suotamo, who now plays Chewbacca after serving as his double on “Star Wars: The Force Awakens”, via Twitter.

“RIP Peter Mayhew. To create a beloved character with warmth and humor is a testament to any actor’s spirit. To do it under a half ton of yak hair takes a true legend.” — Rian Johnson, who directed “Star Wars: The Last Jedi”, via Twitter.

“We are deeply saddened today by the news of Peter Mayhew’s passing. Since 1976, Peter’s iconic portrayal of the loyal, lovable Chewbacca has been absolutely integral to the character’s success, and to the Star Wars saga itself.” — Lucasfilm chief Kathleen Kennedy, via Twitter. CC

Peter Mayhew, Chewbacca in the ‘Star Wars’ films, dies at 74