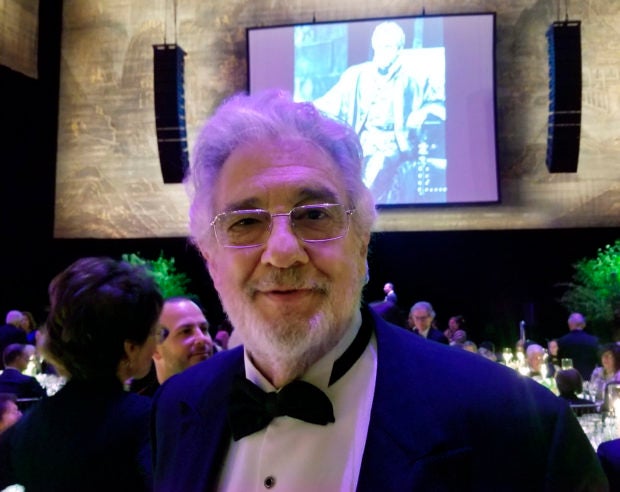 Tenor Placido Domingo poses for a photo against the backdrop of himself as a younger singer as Verdi’s “Otello”, Sunday, April 28, 2019, at the Metropolitan Opera, in New York. Domingo has starred on the stage of the Metropolitan Opera for a whopping 50 years, and is still singing. Image: AP/Verena Dobnik

Placido Domingo has starred on the stage of the Metropolitan Opera for a whopping 50 years — and is still singing, amazingly, at age 78.

On Sunday, the Met literally turned the tables and threw a dinner on the same stage for the Spaniard’s golden anniversary. Guests included soprano Renee Fleming and the company’s new music director, Yannick Nezet-Seguin.

“I have been lucky with a healthy throat and the passion for what I do,” Domingo said, standing by his table in the middle of the stage before the empty 4,000-seat house, surrounded by dinner guests and joking, “for once, I’m here and I don’t have to sing!”

He noted that the international competition he started, Operalia, means that in just about every opera house in the world, he encounters its winners who have become stars he still mentors.

Nezet-Seguin, a French-Canadian about half Domingo’s age, remembers conducting the tenor some years ago “and every day he was the first arriving to work, he was coaching younger artists, coming to rehearsals, wanting to learn; he was always the most respectful, the most loving and passionate person in the room.”

In terms of vocal longevity, he added, “he’s a miracle.”

Domingo is currently appearing in his 52nd main role at the Met — as Germont in Verdi’s “La Traviata” — among 151 global career roles, and counting.

The lifelong tenor now sings as a baritone, appearing in top theaters.

On Sunday, he remembered his Met debut a half century ago, when he was suddenly called to replace an ailing singer.

He was speeding in from his home in Teaneck, New Jersey, vocalizing behind the wheel when the driver in the next car started laughing at him. Domingo rolled down his window and yelled out, “Why are you laughing?”

The man said,”because I’m going to the Met and I’m already hearing the opera.”

Domingo shouted back, “Well, you’ll be hearing me tonight!” CC

Placido Domingo feted at Met Opera for his 50th anniversary