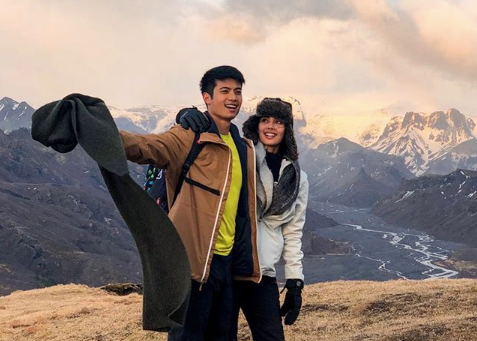 Actress and Miss World 2013 Megan Young and her boyfriend, actor Mikael Daez, flew out of the country to revel in the beauty of Iceland.

The couple has taken to social media to document their trip for their fans and their photos are enough to induce envy. Young posted a picture last April 23 to mark the first day of their Iceland tour. In the photo, Young can be seen holding a camera in her hand while she grasped Daez’s hand in the other.

“We didn’t know what to expect with the weather. We knew it would be cold – but that’s about it,” she said via Instagram. “We weren’t sure with the gear we needed for our hikes so we decided to ask around. Everyone we asked was so helpful…”

Despite initially worrying about the cold, Young shared in another post that there was enough sun to make walking around enjoyable.

“The wind was still a bit strong though,” she said on April 24. “I was messaging a friend and a quote she mentioned was: ‘There’s no bad weather, only inappropriate clothing’ hahaha!”

She also shared a photo of the aurora borealis she was able to glimpse, snapped just before they were to retire to bed.

“I [quickly] went out in the cold and took a couple snaps with my phone. This is the best I could do with my phone but to me it’s probably one of the most memorable photos of this trip,” she gushed.

Young added she did not think they would get to see a bit of the northern lights while in Iceland, thus making the unexpected sighting one of the highlights of their trip.

“I didn’t think we’d even see a little bit of the northern lights and many people advised us that they might not even show at all,” she said. “So this is definitely a treat for our trip to Iceland.”

The couple channeled their inner outdoorsman and went on adventures Young didn’t think she would be able to do, such as hiking up mountains.

They also shared sweet moments and fooled around as they had their photos taken by the black beach, as shared by Daez via his own Instagram on April 28.

Prior to Iceland, the couple also enjoyed a few days in Brussels, Belgium with Daez’s sister Chiara and her husband.

There they received the warmest welcome in the form of Belgian waffles and delicious home cooked meals. JB