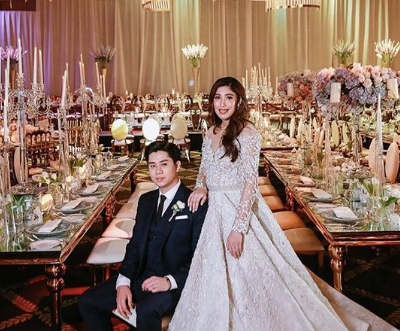 Dani Barretto and businessman Xavi Panlilio tied the knot on Tuesday, April 23, the beautiful moments from their wedding at the Santuario de San Antonio Parish in Makati immortalized by renowned videographer Jason Magbanua.

Magbanua captured the most moving moments from Barretto and Panlilio’s wedding and released them in video form via his official YouTube account on April 24. The video showed varied  scenes –from conversations of the bride inside her hotel room to the church wedding and to the reception at The Peninsula Manila hotel in Makati.

The video opens with Barretto reading a letter she had written for her husband-to-be inside her hotel room. In the letter, she recalled praying to God for this exact day in her life, thinking it would never come.

“God does work in mysterious ways because just when I thought I didn’t deserve this kind of love, I met you,” she said. “Babe, you taught me how to love so purely, you saw me when no one did, you saw all my flaws and called it cute. I mean, how lucky can I get?”

In another scene, Panlilio can be seen sitting across Barretto and telling her how he knew there was something special between them the first time he saw her.

“The moment I saw you even before La Union, I already knew there was something there,” Panlilio told her. “When I saw you again, I guess it was like fate trying to tell me something, because it happened.”

Meanwhile, singer-songwriter Moira dela Torre led the prayer among the bridesmaids, maid of honor and mother of the bride. Actress Bela Padilla was also seen crying barefaced inside the hotel room as her best friend got prepped for her wedding.

“Now I understand why I had to go through a series of heartbreaks and meltdowns, because God was preparing me for you,” Barretto’s voice can be heard in the background. “You have no idea how emotional I get when I talk to God about you. I always tell Him, Lord walang bawian ha, akin na to forever (no taking back, okay, he is mine forever).”

Panlilio also quashed the remarks about their getting married early in life.

“People tell me that we’re getting married too soon, but in reality, they don’t understand how deep our relationship is,” he told his bride. “It’s just perfect. Everything’s just so perfect and I don’t think I could’ve found that with anyone else besides you.”

Magbanua’s video of Barretto and Panlilio’s wedding may be viewed below.

Dani Barretto and Xavi Panlilio tie the knot in Makati