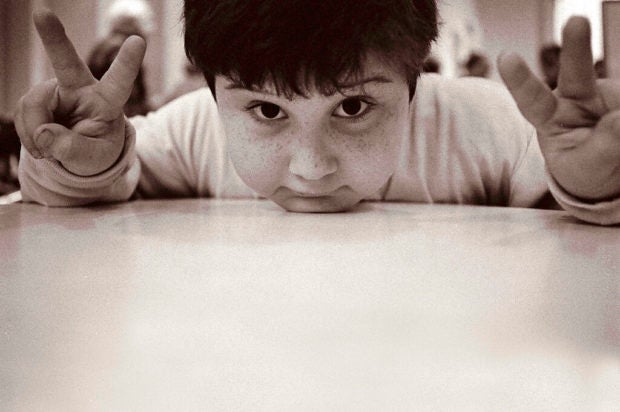 Growing up, Neulinger’s father was an avid videographer whose boxes of tapes took on a more chilling quality after it was uncovered that Neulinger, between the ages of three and seven, was sexually abused by not just one relative but several family members. In “Rewind,” which will premiere at the 18th annual Tribeca Film Festival, Neulinger, now 29, sifts through those tapes to help him piece together what he calls the puzzle of his life.

“A lot of the home videos weren’t labeled. So I’d be watching an incredibly moment from my childhood that I had completely forgotten about,” Neulinger says. “This was an experience of reclaiming beautiful moments and understanding a new context to what happened. There were these moments and then there could be an in-tape cut and all of a sudden I’m staring at one of my abusers.”

At this year’s Tribeca, which will open Wednesday with the premiere of Roger Ross Williams’ HBO documentary “The Apollo,” several films use personal video footage as portals into tragic pasts.

From “Grizzly Man” to “Capturing the Friedmans,” documentaries have long plumbed personal archives for first-person investigations. This year, two of the biggest non-fiction hits — the moon mission recreation “Apollo 11” and the World War I documentary “They Shall Not Grow Old” — have breathed new life into a recovered film.

But the sheer intimacy of the documentaries on display at Tribeca provides a private exhumation, reaching into a recorded past to reveal first-person experiences with sexual abuse, addiction and gun violence. For Neulinger, watching his father’s videos was a way to better understand both his abusers and himself.

“It allowed for a new context. It gave me an opportunity to rediscover myself and see this beautiful child,” says Neulinger, who also directed “Rewind.” ”For a lot of victims of abuse, there’s shame around abuse. There’s this victim-mindset that the abuse must have occurred to me because I’m dirty, disgusting or unlovable. That was something I was still carrying deep down inside.”

“17 Blocks” began innocently. Davy Rothbart, then in his early 20s and living in Washington D.C., gave a video camera to a curious African American nine-year-old named Emmanuel Sanford-Durant, the younger brother to a friend of Rothbart’s. Emmanuel kept filming, on and off, for the next ten years. Sometimes his sister, Denice, or his then drug-dealing brother, Smurf, picked it up.

A decade later, a shooting brought heartbreak to the family. Emmanuel’s hundreds of hours of footage became a deeply personal close-up view of urban gun violence shattering the lives of an American family. Blood is seen being cleaned from the front hallway.

“How do we capture an epidemic that’s so vast and yet keep it personal?” wondered Rothbart.

“17 Blocks,” which takes its name from the distance of the family’s home to the Capitol, includes further filmmaking in the years after the shooting. But Emmanuel’s footage is the heart of the film. Rothbart, who became an author, filmmaker and “This American Life” contributor, had stayed in touch with the family.

In the footage, Rothbart could see life — and the cost of gun violence — through Emmanuel’s eyes. “You’re kind of discovering somebody,” he says.

Documenting one’s life has, of course, become far more commonplace today. But Shannon Hoon, the late Blind Melon frontman, was extensively filming himself long before the days of Instagram and Facebook. “All I Can Say” is based almost entirely on the footage Hoon left behind when he died of an overdose in 1995 at age 28.

His tapes begin in 1990 while a not-yet-famous Hoon watched tractor competitions in Lafayette, Indiana, and run right up to the day of his death. Hoon obsessively chronicled himself while Blind Melon went from an upstart band to a rock sensation thanks largely to their hit video for “No Rain”.

About six years ago, Hoon’s daughter, Nico, brought a box of her father’s High-8 tapes to Danny Clinch, a photographer-filmmaker who had shot the band.

“I knew Shannon often had a video camera with him,” says Clinch. “We realized that he basically filmed everything. It was overwhelming. We had a rough cut and all of a sudden (Hoon’s longtime girlfriend) Lisa would call us and say, ‘Hey, I found two more tapes.'”

Often speaking directly into the camera, Hoon documents everything from hanging out with Axl Rose to the band arguing over a Rolling Stone cover to himself peeing in a urinal. He filmed his daughter being born. He filmed many of his interviews with journalists. It amounted to 250 hours of footage. The filmmakers — Clinch, Taryn Gould and Colleen Hennessy — opted to credit Hoon as co-director.

“The idea that he was documenting himself for the world to see is really interesting,” says Clinch. “Did he feel like his candle was burning really bright and it might fade out? I don’t know.”

Director Asif Kapadia extensively used personal film archives for his Amy Winehouse documentary “Amy.” But “All I Can Say” is almost entirely from Hoon’s point of view. Holding so much of Hoon’s life in his hands, Clinch grants, has been a heavy responsibility.

“It’s been a lot on my shoulders to be given the gift of these tapes,” says Clinch, exhaling.

But among the films at Tribeca, none bore a heftier load than Michael Metelits, the son of Marion Stokes. Matt Wolf’s “Recorder: The Marion Stokes Project” chronicles Stokes’s mad mission to record television 24 hours a day. She recorded on up to eight TVs, from the mid-70s until her death in 2012. A communist activist who became wealthy, she was fascinated by the rise of round-the-clock TV news.

She left behind 70,000 VHS tapes. The tapes chronicle not Stokes’ own life but a quarter century of American history as filtered through video. MKH