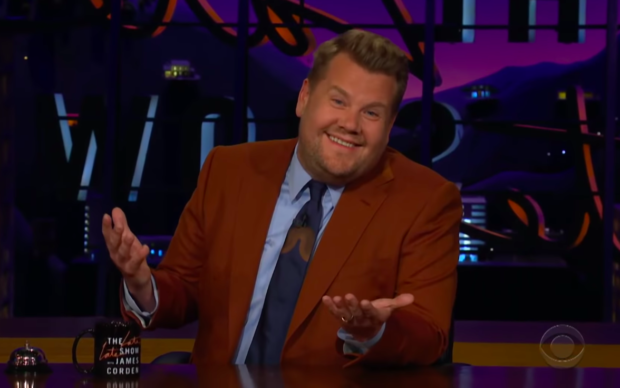 It is now clear where “The Late Late Show” host James Corden got his sense of humor from, as his parents hilariously reacted to the first episode of the final season of the fantasy saga “Game of Thrones”.

Margaret and Malcolm Corden took a leap of faith and watched the first episode of the HBO show’s final season — without any context. A clip of the first-timers’ impressions was uploaded on the official YouTube channel of “The Late Late Show” last Tuesday, April 16.

“The thing is, we have never even seen it before,” Malcolm confessed. “We do not know anything about it, but here it goes.”

As the title sequence started, Margaret asked, “Are there any rude bits in it?” to which Malcolm responded, wearing a fur cape to match the show, “Oh, I’m sure there are.”

True enough, a sex scene was shown in the episode, which got the couple giggling as Malcolm covered Margaret’s eyes with a pillow.

During a romantic scene with Jon Snow (Kit Harington) and Daenerys Targaryen (Emilia Clarke) in the snow, Malcolm recalled their days in Bedfordshire, England, “That was like us too, growing up, wasn’t it?”

Corden’s mother also pointed out the host’s resemblance to the character Samwell Tarly (John Bradley), saying it is the type of role Corden would get in the show.

While the couple had no clue for the most part, they have recognized some familiar faces such as Jon Snow and Bran, whose surname must be “flakes,” according to Malcolm.

The jokes continued until the ending credits rolled out, leaving the couple confused. “What is all the fuss about?” asked Malcolm.

The “Game of Thrones” final season debut, which aired April 14, broke HBO ratings records, with 17.4 million viewers who watched on television or online. The eight-year fantasy saga will reach its conclusion on May 19, 2019. JB

HBO looks beyond ‘Game of Thrones’ maybe back to a prequel

‘Game of Thrones’ returns for eighth and final season