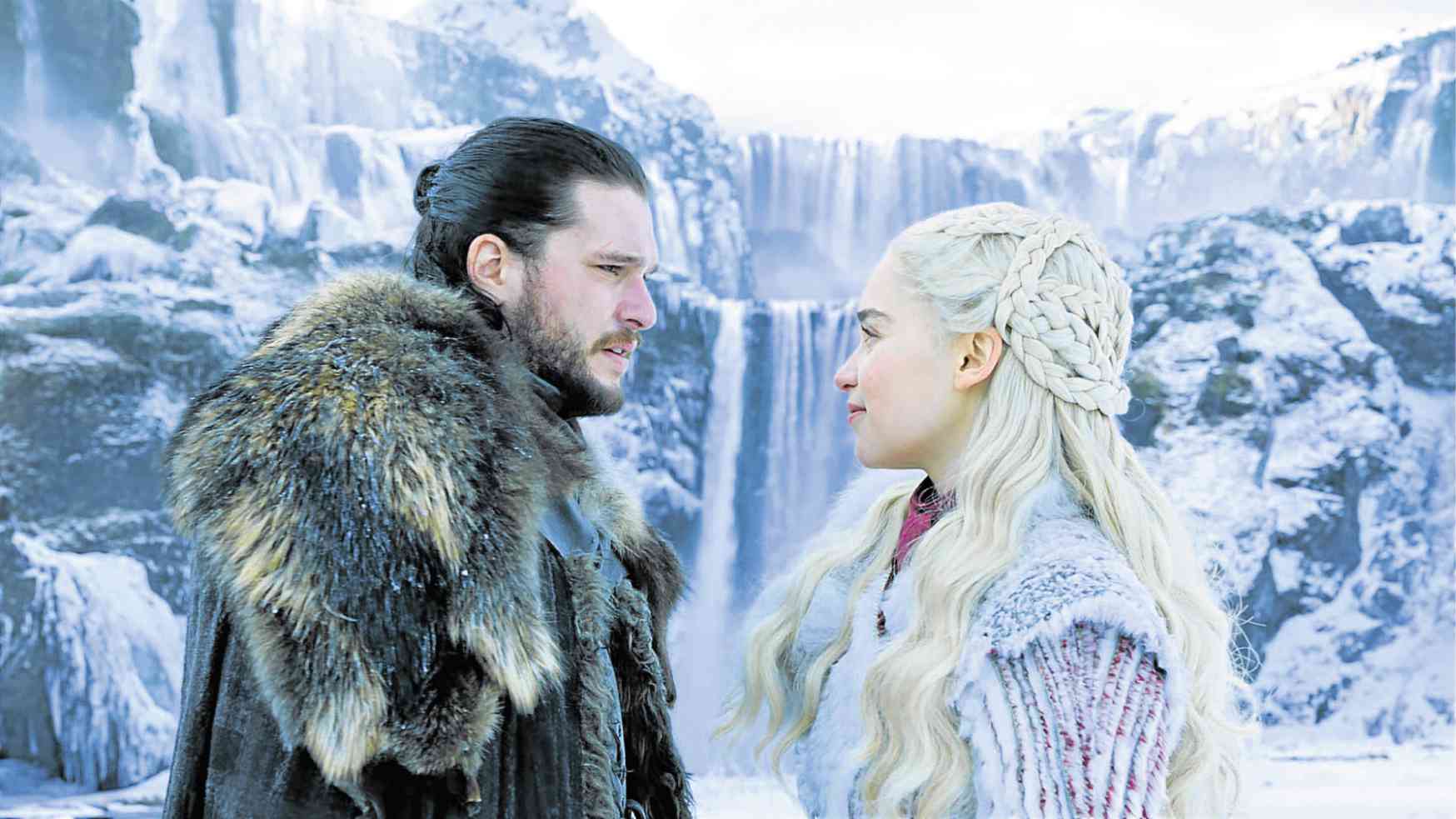 LOS ANGELES—Spoiler alert! This entire column features spoilers about the first episode of the final season of “Game of Thrones.”

It was the morning after the world premiere of Episode 1 of Season 8 of HBO’s “Game of Thrones” at the Radio City Music Hall in New York. While Emilia Clarke stayed up for the star-studded after-party at the Ziegfeld Ballroom, Kit Harington only attended the red carpet arrivals and the cast’s introduction on the Radio City stage because he had to rehearse for his “Saturday Night Live” appearance that weekend.

In separate interviews at the Mandarin Oriental, New York, Emilia and Kit discussed the surprises of the first episode that got the audience at the premiere buzzing.

The mother of dragons looked fresh in a Miu Miu midi dress. Dragons were among the big topics that morning because Emilia, who plays Daenerys Targaryen in case you’ve been hiding under a rock all these years, had the monopoly of riding the huge, serpent-like mythic creatures.

But in the finale season’s opening salvo, guess who also soars in the skies astride a dragon? Kit Harington’s Jon Snow. The two lovers, each riding a fire-breathing flying reptile, enjoy a moment up in the clouds, a respite from the tensions on the wintry ground where the feuds boil and the buildup for the wars to come escalates. And the White Walkers continue to march south. 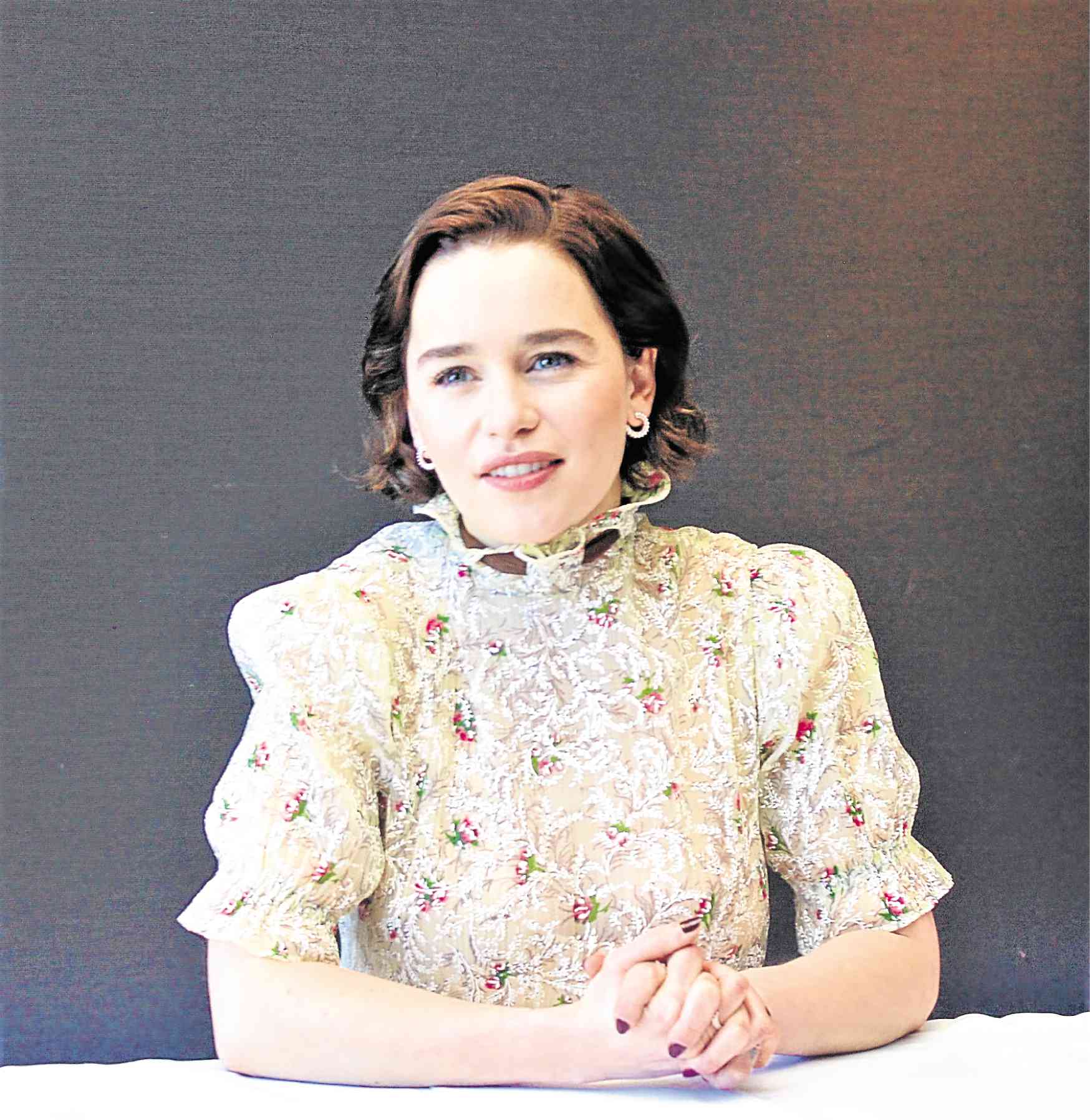 “So annoying,” Emilia quipped with a laugh when teased that Jon has ended her monopoly of riding dragons, her Daenerys’ “babies.”

The London-born actress humorously recounted Kit’s first time to ride a dragon, actually akin to being strapped onto a mechanical bull. “I was there when Kit was just trying to get on. He was trying to play it cool, like he has been doing it for ages. I’ve never complained about riding a dragon because, let’s face it, riding a dragon is not what one should complain about.”

She said with a sly grin, “I saw Kit ride on it and I’m sure it was an anatomical situation (laughs), more than anything else. He definitely tried to cover it up, but after a while, he just gave in. He said, ‘This is really painful. I don’t know how you do it.’”

Apparently, it was also never a breeze for Emilia, who has been riding this contraption through all the show’s seasons. “No, they never made it easier,” she clarified.

“The first time I flew on the dragon, it was a very basic setup. It was in Osuna (Spain). They just set up a saddle, a dude on the back and someone with a leaf blower in my face, and that was it. And a green thing following around.

“For the final season, we were in an aircraft hangar, on a huge green shell 20 feet up in the air, made out of hydraulics. It has eight individual moving pieces. And there’s a trick on the side who controls it with a joystick. For 10 seconds of dragon riding, it literally takes us three days to shoot that. So Kit is complaining for a reason, because it’s a very long shoot to get what you saw last night.”

Told that Kit looked realistically scared riding a dragon for the first time, Emilia chuckled and said, “He does look scared, and he should be.”

To the show and the two actors’ credit, it looked like a thrilling dragon joyride.

Asked about her reaction upon reading the script of Episode 1 and how significant it is for the rest of the final season, Emilia answered, “Yeah, every first episode sets stuff up for the season. This one sets things up quite well. I remember reading it and I’m not going to lie. When I read, ‘Jon Snow flying a dragon,’ I was like, sure, he can fly one, too!

“But I definitely remember it because there’s so much stuff that happens after this. If this is just the start of everything, then there’s going to be loads that’s going to follow that.

“Very quickly, whatever I felt with the first episode, I was reading the second one before I knew what was going on. But it was very exciting, with me going to film in Winterfell for the first time. Then, Kit said, ‘And this happened over here!’ And everyone said, ‘And this is our place that we do this!’ It was like someone showing you their home. It was really sweet.”

On how good the wannabe queen Daenerys is at family relations, the 32-year-old replied, “She’s trying to be as domestic a mother of dragons possibly could in this situation. Because she’s meeting her boyfriend’s family.

“This is brand-new territory for her. Because normally, guys are bending the knee and killing people for her, and this boy is just a sweet boy.”

The boy sheepishly admitted that he missed watching the first episode because he had that “SNL” rehearsal. “The funny thing is, I haven’t seen that first episode yet,” Kit confessed with a laugh. He still sported the Jon Snow beard that he would shave off a few days later, to the dismay of many of his “GoT” fans. 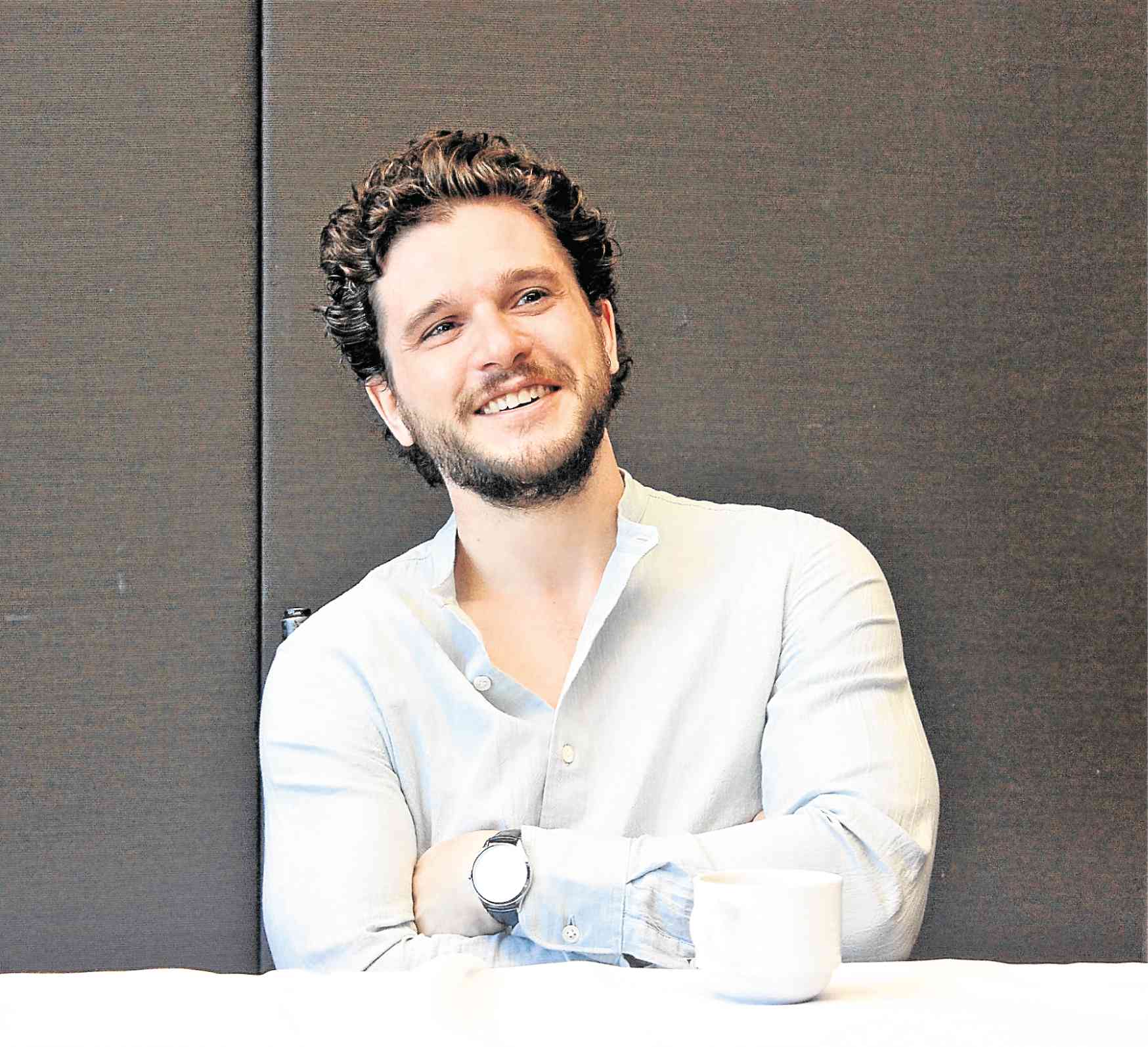 Prompted for his own account of riding a dragon for the first time, Kit began: “Emilia’s piece of advice to me was, ‘Dude, it’s fun the first time.’ Because it’s not quite as glamorous as it looks when you see it onscreen. It’s this big motorized buck. You spend weeks in this green room pretending to ride a dragon with wind blowing in your face.

“I haven’t seen the episode, but I saw it on ADR (automated dialogue replacement, or dubbing), and it looks brilliant. We’ve seen Emilia being this natural dragon rider. She gets on it, and she just knows how to do it. The aim for me was to look like … maybe it’s not Jon’s natural home.

“Like with anything with ‘Thrones,’ they want as realistic reactions as they could possibly get to something like riding a dragon. The reality of it (laughs)? It’s mostly boring. And that’s what Emilia said.

“Emilia and I have a kind of competition to see who can moan the most. She was like, ‘I’ve been on a buck for days and weeks.’ I was like, ‘Oh, sorry. You’ve been in a warm room. I’ve been out in the freezing cold.’ Then, I got on that buck for three weeks, and I was like, OK, I get it. She was right (laughs). It’s dull as hell.”

The first episode’s real stunning moment though was in a big reveal toward the end. John Bradley’s Samwell Tarly tells Jon who he really is. It’s a lot for a man to absorb all at once: Jon is not Ned Stark’s son; he’s Aegon Targaryen, Lyanna and Rhaegar’s son; which means he’s the true king; and Daenerys is his aunt and rival for the Iron Throne.

“It was a scene that I’d been waiting to do since Season 1,” Kit stressed. “We established that we don’t know who Jon’s mother is in Episode 1. That’s what defines him—he’s a bastard. But anyone who knows anything about narrative storytelling is going to know. It’s why I felt safe when Jon died. I was like, he’s coming back to life. You’ve got to find out who his mother is before he dies.

“You know that, at some point, he’s going to be told that his mother was this person. As it happens, his mother is not who you thought it would be. And then I read the actual scene. It was with John Bradley. I was happy that it was me and him doing that scene, because I love working with him. 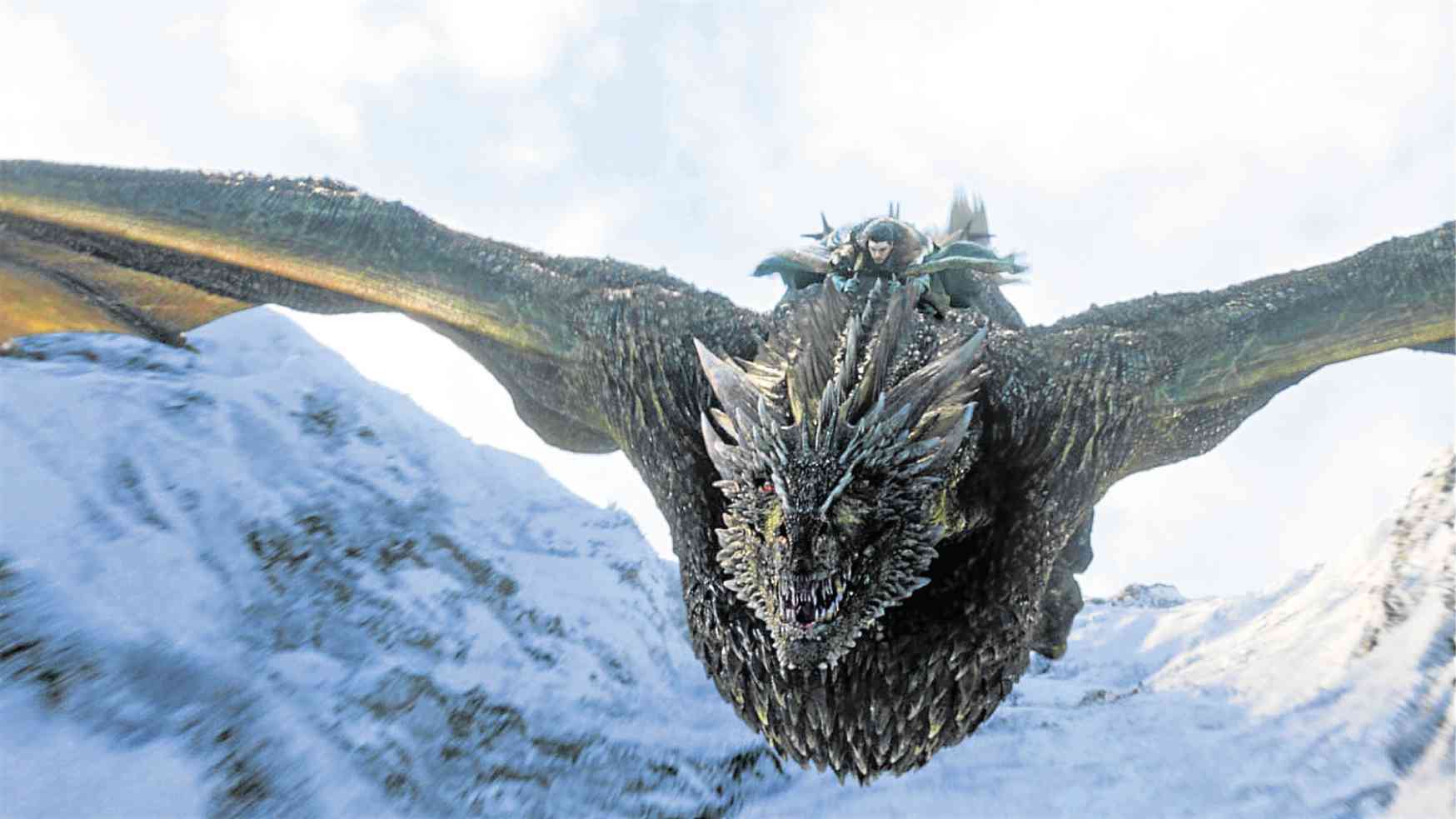 Scene from “Game of Thrones” —PHOTOS BY HBO

“But in a scene, where someone tells you everything about yourself isn’t true, you are legitimate, your father wasn’t your father, you are the heir to the throne—it was a difficult one. Because you’re like, how do I do that? That’s life-changing and seismic information on a level that none of us will ever have to experience.

“So, it was one that I thought was really important to get right, because we, as an audience, have been waiting for it. And Jon has been waiting for it. The reason we made the choices we did on that day was, how will he react with anger—that it’s the thing of, I’ve been lied to my whole life.”

Kit continued, describing the wide range of reactions he had to muster in his emotional scene with John: “Jon suddenly gets a bit dangerous. ‘You’re f**king telling me this? What?’ It’s not, ‘Oh, my God, great, I know who my mom is!’ It’s like, ‘You’re f***ing everything up, dude. Why did you tell me?’”