“Really – to blame his loss on my brother?” Aquino said in a now-archived Instagram post on Sunday. 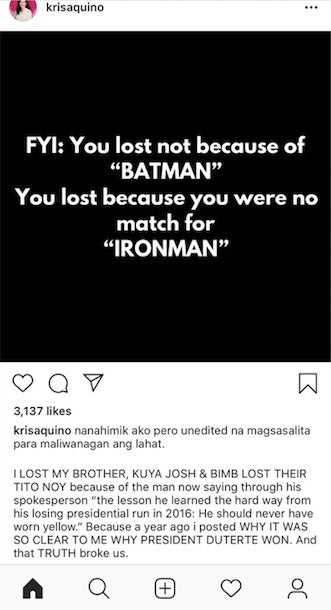 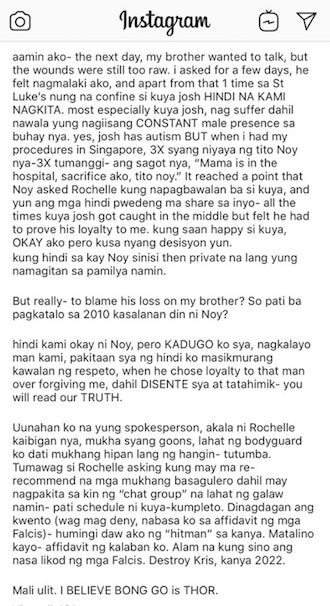 This was after Roxas’ campaign manager Caloocan City 2nd District Representative Edgar Erice said they decided to change the former’s color to blue for his 2019 senatorial bid.

“It was a conscious decision [to change colors] because one mistake [Roxas] made in 2016 was acting like Robin to [Aquino’s] Batman … and Robin will never be Batman,” Erice said, referring to DC Comics’ superhero duo.

In a separate post, Aquino wrote to her brother and said: “I know we were raised knowing the world can turn their backs on us BUT we’d always have each other… in time i pray we can be FAMILY again.”

Aquino also explained she archived her previous post because Senator Francis “Kiko” Pangilinan asked her for a “ceasefire.”

“I archived my other post not because i don’t stand by everything i said, but because ma respeto akong pinakiusapan ni @kiko.pangilinan ng “ceasefire.” Please know this about me, when i have seen a person is GENUINE, madali akong kausap, kaya kong magbigay,” Aquino said. /cbb