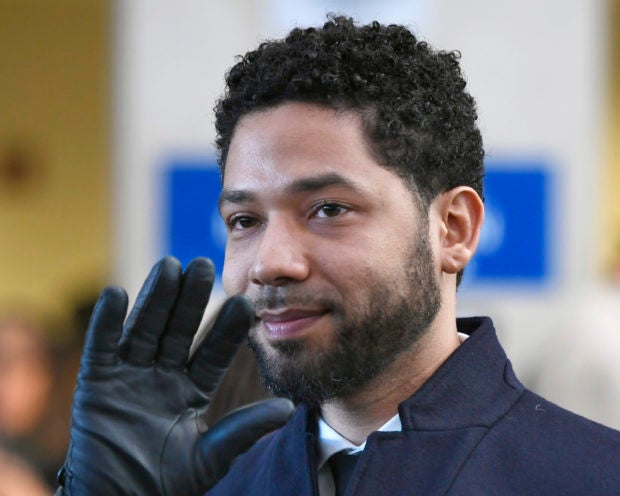 In this March 26, 2019, file photo, actor Jussie Smollett smiles and waves to supporters before leaving Cook County Court after his charges were dropped in Chicago. A deadline is looming for Smollett to pay over $130,000 to Chicago to cover part of the costs of an investigation into his report of a racist, anti-gay attack or risk getting slapped with a civil lawsuit. Thursday, April 4, is seven days since Mayor Rahm Emanuel’s law department sent the “Empire” a March 28 letter demanding he writes them a money order or cashier’s check for $130,106, plus 15 cents. It said he had seven days. Image: AP/Paul Beaty

Chicago filed a lawsuit against Jussie Smollett on Thursday in a bid to recoup the costs of investigating a racist, anti-gay attack that authorities say was orchestrated by the “Empire” actor as a publicity stunt, with the city saying — at minimum — that it now wants triple the amount it initially asked Smollett to pay.

The 12-page civil lawsuit , filed in Cook County court, is the latest volley in a legal battle that shows no signs of abating since Smollett reported that masked men beat him up on Jan. 29 in Chicago, shouting slurs and wrapping a rope around his neck.

The suit comes after Smollett refused a demand that he send the city $130,106 to reimburse Chicago for overtime as police sought to verify Smollett’s account.

The lawsuit doesn’t specify an amount of money the city is seeking but does indicate it wants over $390,000 plus “further relief as this Court deems just and equitable.” It also asks that Smollett be ordered to foot any legal bills Chicago incurs in suing him.

The city’s resolve to take Smollett to civil court follows a surprising decision by prosecutors in March to drop all criminal charges accusing him of staging the incident, saying they believed they could prove the charges but that it wasn’t worth the time and expense.

Mayor Rahm Emanuel denounced the decision as “a whitewash of justice,” and others criticized the Cook County state’s attorney’s office for not requiring an apology and an admission of guilt from Smollett as a condition for tossing the case.

The complaint, written by City Hall’s top attorney, Edward Siskel, lacks the hard-hitting language and denunciations of Smollett by Emanuel. It’s devoted primarily to describing the allegations already spelled out when Smollett was charged in late February.

Smollett, who is black and gay, maintains he has told the truth from the beginning. Reached by phone Thursday evening, a spokeswoman for Smollett’s legal team said there wasn’t an immediate comment on the lawsuit. Smollett’s lawyers would have to respond with a court filing and could move in coming weeks to have the lawsuit thrown out.

Smollett lawyer Mark Geragos said in a letter to the city last week that claims Smollett made the entire thing up were “defamatory,” accusing Chicago of trying to “harass” Smollett and pointing to the dismissal of charges as proof he is innocent. It also said Smollett wouldn’t be “intimidated” into paying anything.

Unless the case is settled beforehand, the lawsuit would eventually go before a jury, which would have to decide if the city or Smollett is right.

If Smollett still refuses to pay after a verdict in the city’s favor, his bank accounts could be frozen.

Smollett admitted no wrongdoing, but agreed to do some community service before charges were dropped. He also agreed to forfeit $10,000 in bond money, which the city could use against him in the civil case as an implied admission of guilt.

Evidence sealed in the criminal case could be unsealed in the civil case and be presented at trial. Smollett could also be required to sit for depositions, forcing him for the first time to explain evidence that the city says shows he was lying.

To the city’s advantage, the threshold for proof will be lower than in criminal court. The city won’t have to prove beyond a reasonable doubt Smollett staged the attack in civil court, only that it’s more likely true than not true that he did.

Among the risks for the city is that the civil litigation could end up costing far more in legal bills than it could ever hope to get from Smollett.

It’s also unclear if Mayor-elect Lori Lightfoot is onboard with the Emanuel administration’s determination to keep legal pressure on Smollett. Lightfoot, a former federal prosecutor who will be Chicago’s first black female mayor when she’s sworn in on May 20, has indicated only that the public deserves a better explanation for why the criminal charges against Smollett were dropped. CC