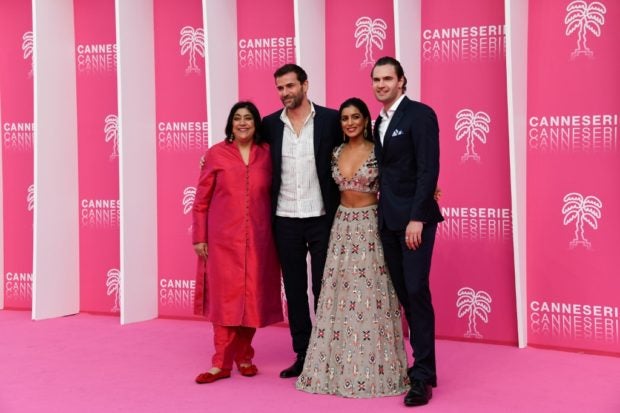 British-Indian screenwriter and film director Gurinder Chadha (L), creator of the British TV show Beecham House, poses with actors (L to R) Gregory Fitoussi, Pallavi Shada and Tom Bateman during the 2019 Cannes International Series festival, in Cannes on April 7, 2019. – Canneseries aims to highlight series from all over the world and to give an international voice to this increasingly popular and fiercely creative new art form. Image: Yann Coatsaliou/AFP

The maker of a lavish new television series dubbed the “Indian Downton Abbey” wants to turn the tables on the cliches of the glorious British Raj.

The sweeping historical drama, “Beecham House”, which is premiering at the Canneseries Festival in the French Rivera resort, is set in the final years of the 18th century as the battle for India between the British, the French and the fading Mughal Empire reached its peak.

But unlike classic series such as “Jewel In The Crown”, it is not told from the point of view of the British colonists, its maker Gurinder Chadha said.

The “Bend It Like Beckham” director told AFP she has brought her “own British-Asian perspective to the story”, including using material from Indian politician Shashi Tharoor’s hard-hitting bestseller, “Inglorious Empire: What the British Did to India”.

Chadha said Tharoor’s “anger” is balanced by her lead character, an “honorable” English trader called John Beecham who quits the East India Company in disgust at its rape of the country.

The father of a half-Indian child, Beecham, played by British period drama heartthrob Tom Bateman, is caught up in the intrigue.

“I grew up with shows like ‘Jewel In The Crown’ and ‘It Ain’t Half Hot Mum’ so I am able to jump between the two sides,” she added.

Chadha set the show — which will be broadcast on ITV in Britain and on PBS in the U.S. in the coming weeks — in 1795 “at a point when India could have gone in any way”, she said.

“The Mughals are on the way down, the Indian maharajas are standing by and the English are on their way to Delhi but are not there yet, and the French are down in the south with Tipu Sultan — and they were damned if they are going to be beaten by the British.

“But the French Revolution is going on back home so they are an army without a government… A few years later Napoleon is going to set out” to follow in the footsteps of Alexander the Great and “invade India”, although he never got further than Egypt, she added.

“It is all up for grabs, a free for all, everyone is plotting with each other and making alliances,” the director added.

This is not Chadha’s first foray into the fraught history of the subcontinent. Her 2017 movie about Indian Partition, “Viceroy’s House”, was banned in Pakistan, with the poet and writer Fatima Bhutto — a niece of the country’s former leader Benazir Bhutto — calling it “a servile pantomime.”

Making that film convinced Chadra there was an appetite to explore the “relationship between Britain and India in a long-running TV series. I really wanted to go back to the beginning” to explain as well as entertain and counter the “colonial amnesia” that Britain often suffers from.

Chadha said there were many Englishmen like Beecham who wanted to do right by the subcontinent and its peoples and would have melted into its fusion of cultures.

“Many people went native, as they say, and there are wonderful portraits of Englishmen all dressed up in Indian clothes with their Indian wives and children. We still have this fascination with India through food, yoga and meditation, and it has had a massive cultural impact on Europe.

“It is Sunday night TV, and is all about personifying the history through characters you care about and through the moral questions and judgments they had to make and the dilemmas they were faced with.”

Nevertheless, Chadha said the Brexit crisis, with some conservatives yearning for a so-called “Empire 2.0” of a free-wheeling Britain trading with its former colonies, had given the series “a sudden and unexpected relevance.” MKH

‘Downton Abbey’ is coming to the big screen