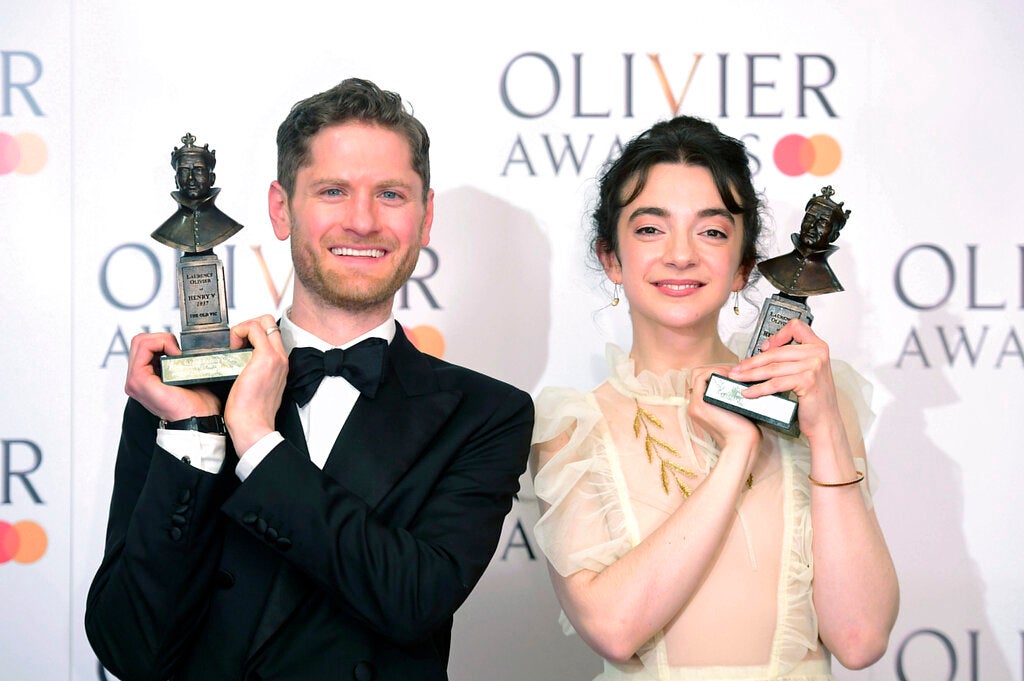 LONDON  — “The Inheritance”, an epic drama about gay lives in New York, and musicals “Come From Away” and “Company” were the big winners at British theater’s Olivier Awards on Sunday, receiving four trophies apiece.

“Come From Away,” inspired by a small Canadian town that sheltered thousands of stranded airline passengers after the 9/11 attacks, was named best new musical at Britain’s equivalent of Broadway’s Tony Awards. The play also took trophies for sound, outstanding achievement in music and choreography.

Choreographer Kelly Devine dedicated the award in her category to the people of Gander, Newfoundland who in real life “effortlessly showed the world how easy it is to be kind.”

The award for best musical revival went to a production of Stephen Sondheim’s “Company” that gender-swapped the lead role of a commitment-shy New York singleton and turned the usually male Bobby character into Bobbie.

Director Marianne Elliott attributed the show’s success partly to “a wind of change blowing in the industry, where celebrating female stories is not only possible, but absolutely vital.”

Lopez said he was “overwhelmed and overjoyed” by the trans-Atlantic success of his seven-hour epic, which had its world premiere at London’s Young Vic Theatre.

“We’ve seen a lot of Brits come over and take home Tonys,” Lopez said backstage, clutching a statuette topped with a bust of the late actor for whom the award is named, Laurence Olivier. “It’s only fair.”

Lopez said he was hopeful the show would get a Broadway run now that London has shown the play, mined from his own experience, resonates with audiences.

“You could have blown me over with a feather,” he said of the reaction his play got from theatergoers in Britain’s capital. “Even some of the New York jokes, they got.”

“The Inheritance” also took prizes for lighting and for Stephen Daldry’s direction, while star Kyle Soller beat rivals who included Ian McKellen to be garlanded best actor in a play.

Soller, an American based in London, dedicated his award to “those who continue to fight in a world where you can still be stoned to death for loving who you love.”

Spanish-British actress Patsy Ferran was crowned best actress in a play as a woman consumed by love in Tennessee Williams’ smoldering “Summer and Smoke.” The competition was a talented field that included Gillian Anderson for “All About Eve” and Sophie Okonedo for “Antony and Cleopatra”

“Summer and Smoke” also took the prize for best revival.

Sharon D. Clarke was named best actress in a musical for her powerful performance as the maid to a Southern U.S. family in the 1960s in Tony Kushner’s “Caroline, or Change.”

Best actor in a musical went to Kobna Holdbrook-Smith for playing a charismatic, abusive Ike Turner in “Tina – The Tina Turner Musical.”

Founded in 1976, the Olivier Awards honor achievements in London theater, musicals, dance and opera. Winners in most categories are chosen by a panel of stage professionals and theatergoers.

Sally Field, Kelsey Grammer, Tom Hiddleston, David Suchet and Gloria Estefan were among the stars walking the red carpet in a drizzle before the ceremony at the Royal Albert Hall.

The show saluted long-running musicals “The Lion King” and “Mamma Mia,” both celebrating 20 years of playing in London’s West End.