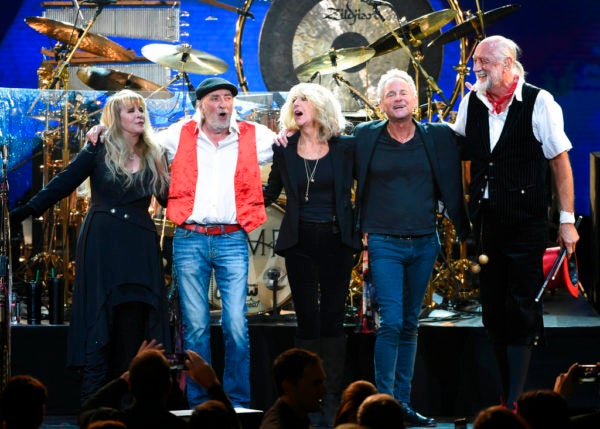 In this Jan. 26, 2018 file photo, Fleetwood Mac band members, from left, Stevie Nicks, John McVie, Christine McVie, Lindsey Buckingham and Mick Fleetwood appear at the 2018 MusiCares Person of the Year tribute honoring Fleetwood Mac in New York. The band said in a statement Monday that Buckingham is out of the band for its upcoming tour. Buckingham left the group once before, from 1987 to 1996. He’ll be jointly replaced by Neil Finn of Crowded House and Mike Campbell of Tom Petty and the Heartbreakers. Image: Invision/Evan Agostini via AP

Fleetwood Mac is stepping in to replace the Rolling Stones during the New Orleans Jazz & Heritage Festival.

Festival organizers announced Thursday that Fleetwood Mac will close the main stage on May 2.

The Stones were slated to headline the festival that day as part of a special celebration to mark the festival’s 50th anniversary. But the group announced March 30 that they would be postponing their latest tour so singer Mick Jagger could receive medical treatment.

Festival organizers say people who bought the higher-priced tickets to see the Stones will get refunds.

Tickets to see Fleetwood Mac as well as a slate of other performances festival that day will cost $75 through April 19. CC