Henson, Rockwell bring sensitivity to ‘Best of Enemies’ — a review 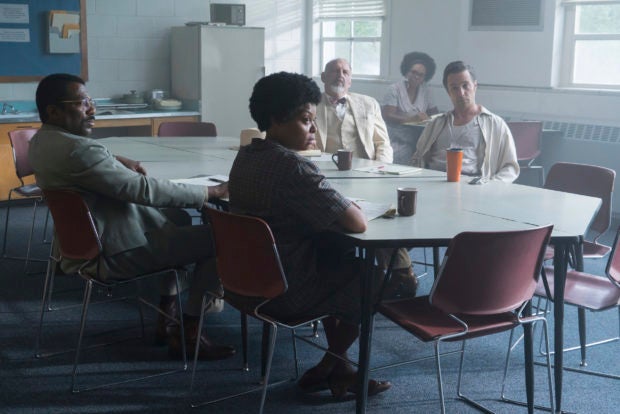 This image released by STXfilms shows, from left, Gilbert Glenn Brown, Taraji P. Henson, Nick Searcy and Sam Rockwell in a scene from “The Best of Enemies”. Image: STXfilms/Annette Brown via AP

If you didn’t know that “The Best of Enemies” was based on a true story, you’d likely find the premise preposterous, and for a movie, probably ill-advised: A lowbrow Klan leader in North Carolina and a black single mom/community activist are forced into dialogue and become lifelong friends and allies. Really??

Wait, you’d think, is this another sorry effort to make a feel-good film about the history of race relations in the United States? Well, it can’t help but feel good, but the story actually happened: activist Ann Atwater and C.P. Ellis, the Exalted Cyclops of a clan group in Durham, formed an enduring partnership for more than three decades. Atwater even delivered the eulogy at Ellis’ funeral.

“The Best of Enemies”, by writer-director Robin Bissell, is the latest of a series of recent films to tackle the history of racism in America, including the Oscar-winning but divisive “Green Book” and the much, much better “BlacKkKlansman” by Spike Lee. While much of Bissell’s film is poignantly rendered, especially the spirited lead performances by Taraji P. Henson and Sam Rockwell, it has its flaws and its omissions.

For example, we see much more of Ellis’ daily life, with family and friends, than we see of Atwater’s. Though there’s an important subplot involving Ellis’ disabled child and the impact of that challenge on him and his wife, Mary (a sensitive Anne Heche), it seems less than balanced; there’s just a lot more detail about Ellis than about Atwater, or about Durham’s black community at large.

That’s probably because the film needs to find a way to lay the groundwork for how a man like Ellis came to be in the Klan, and then for the most stunning part of the story: his seemingly sudden transformation.

But the film isn’t only about that transformation. It’s also a somewhat fascinating deep dive into an arcane process of community problem-solving called a “charrette” — ever heard of it? — that was used to resolve the thorny issue of school integration in Durham.

More on that in a minute. We begin with introductions, first to Atwater (Henson, aided by lots of costume padding) and her relentless advocacy for fair housing. Her efforts bring her in front of a town council run by reactionary white men who quietly sympathize with Ellis and his cohorts (one member even defiantly turns his swivel chair around when Atwater speaks.)

As for Ellis, we meet him as he’s recruiting youth for a Klan corps. He’s devoted to his Klan buddies, and the film seems to try to show that for him, it isn’t just an odiously racist undertaking but also a means of belonging to something, for the first time in his life.

Because Rockwell, despite his talent in all sorts of roles, still seems to exude a core of basic decency, it’s a shock to see his Ellis lead a Klan “activity” that involves shooting up the house of a white woman who’s dating a black man, as she cowers on the ground inside amid shattered glass.

The plot really gets going when a frightening fire guts the school attended by Durham’s black pupils (nearly two decades after Brown vs. Board of Education, integration hasn’t hit Durham).

Atwater immediately argues that black students be integrated into the white school. The NAACP files suit, and the judge turns to an expert from Raleigh to conduct the “charrette” — basically, forced negotiation under deadline.

The expert, Bill Riddick (Babou Ceesay), asks Atwater and Ellis to be co-chairs of the two-week process. At first they hate the idea. Then they realize they’re the best chance for their constituencies.

On the process goes, punctuated by dirty, vote-suppressing tactics from the white side. A white woman who sympathizes with the black community, for example, gets a chilling visit at home from two Klan guys and one baseball bat.

Ellis, though, is slowly changing, and Rockwell does a finely paced job here, one that will leave us surprised but not totally shocked at his final action.

The film ends, not surprisingly, with an inspiring scene that may leave you misty-eyed. Here again, though, there seems a bit of a missed opportunity. What happened to Ellis after his break with the Klan? Do some reading and you’ll see he was shunned by his former associates and his life threatened. It might have been interesting — and grounding — to see something about how life unfolded for both characters in ensuing years.

But it’s hard to argue with the decision to show actual footage of Atwater and Ellis talking and laughing as the credits roll — a frankly thrilling real-life glimpse into the unlikeliest of stories.

“Best of Enemies”, an STX Entertainment release, has been rated PG-13 by the Motion Picture Association of America “for thematic material, racial epithets, some violence and a suggestive reference.” Running time: 133 minutes. Two and a half stars out of four. CC

‘The sky is not falling in Hollywood,’ says Lionsgate chair