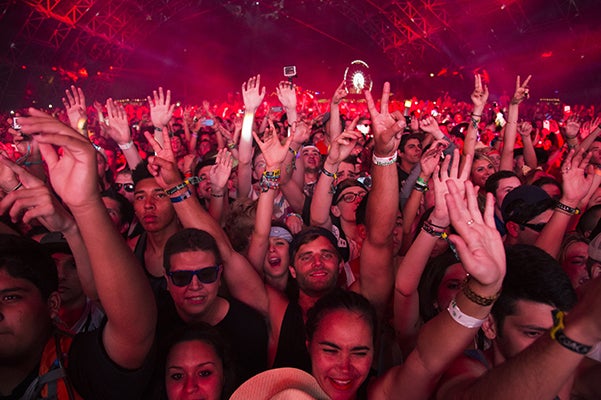 While spring has officially just begun, music fans are getting ready to travel varying distances to see their favorite artists on stage.

Here are four music festivals around the world to go to this April.

North America’s festival season is right around the corner, with Coachella leading the pack. Celebrating its 20th anniversary this year, the festival has curated an impressive lineup of artists, headlined by Childish Gambino, Tame Impala and Ariana Grande. They will be joined on stage by Solange, Kid Cudi, J.Balvin, Janelle Monaé and Gesaffelstein among others. Although the first weekend of Coachella is only days away, Kanye West has just announced that he will be performing his “Sunday Service” on April 21 at 9 a.m.

Coachella is held in Indio, California, over two weekends — April 12 to 14, and April 19 to 21. Tickets, however, are currently sold out.

Now in its seventh edition, Lollapalooza Brazil will feature performances from Artic Monkeys, Jorja Smith, Kendrick Lamar and Kings of Leon. Concertgoers will also be able to enjoy sets by Post Malone, Sam Smith, Twenty One Pilots and Steve Aoki. An array of South American artists will also take the stage at the Autódromo de Interlagos, such as Molho Negro, Carne Doc and Duda Beat.

Something in the Water, Virginia Beach, Virginia, April 26 to 28

Singer-songwriter Pharrell Williams has stacked up an impressive lineup for his inaugural Something in the Water event. Held in his hometown of Virginia Beach, the three-day festival will feature sets from Usher, Snoop Dogg, Missy Elliott and Janelle Monaé. Other headliners include J Balvin, Gwen Stefani and Diplo. The debut festival will also host a special screening of Samuel “Blitz” Bazawule’s “The Burial of Kojo”, which premiered on March 31 on Netflix.

Something in the Water takes place in Virginia Beach, Virginia, from April 26 to 28. All tickets have been sold out.

Celebrating its 30th anniversary this year, Byron Bay Bluesfest has curated an eclectic lineup of international artists like Iggy Pop, Ben Harper & the Innocent Criminals and Jack Johnson. They will be joined on stage by Hozier, Norah Jones, Ray LaMontagne and Jack White’s The Saboteurs — who will make their Bluesfest debut.

The Byron Bay Bluesfest festival will take place at Tyagarah Tea Tree Farm, in Byron Bay, New South Wales, from April 18 to 22. Tickets — starting at AU$195 (about P7,200) — are available on the festival’s official website.

During this music festival-packed month of April, many artists and concertgoers will be gathering from all over the world to bond over their love for music. CE/JB