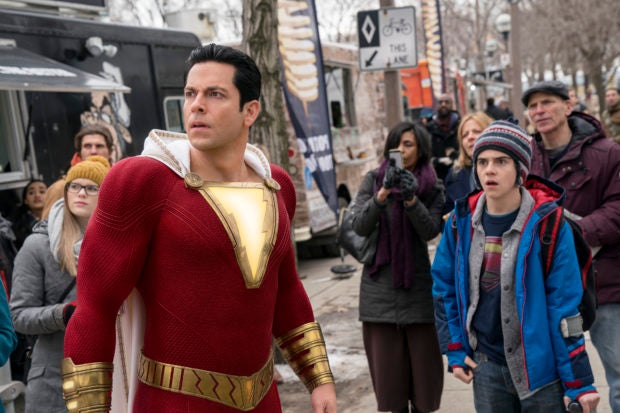 OK, so it’s basically “Big” with superheroes and villains instead of businesspeople and girlfriends, but director David F. Sandberg has infused his film with so much heart and charm that it hardly matters. Even the deficiencies, like the sluggish beginning and the random, ridiculous villains, fade away under a haze of goodwill because unlike so many big spectacle action pics with sequels in mind, “Shazam!” actually sticks the landing.

But perhaps I’m getting ahead of myself. Don’t worry if you don’t happen to know anything about “Shazam!” or are convinced that you won’t care. I certainly didn’t. Plus, there are a lot of superheroes to keep track of these days and someone who needs an exclamation point is and should be immediately suspect.

The movie isn’t here to judge any lack of knowledge though. It’s an origin story about a jaded 14-year-old Philadelphia foster kid, Billy Batson (Asher Angel), who’s bestowed with superpowers by Djimon Hounsou (naturally). As Shazam, he’s physically altered into an adult and takes the form of Zachary Levi. But of course, even with his height, his muscles, his voice and even his powers, he’s still very much a kid and has a lot to learn.

Those are the basics, but the spirit really comes from the smart writing, the pitch-perfect casting and the supporting world around Billy and Shazam. Right before he gets his powers, he’s placed in a new group foster home led by Rosa (Marta Milans) and Victor Vasquez (Cooper Andrews) that’s full of quirky characters: Freddy (Jack Dylan Grazer), a disabled superhero obsessive with a biting wit; Eugene (Ian Chen), a violent video game obsessive; Darla (Faithe Herman), the adorable youngest; Mary (Grace Fulton) and Pedro (Jovan Armand). The young actors assembled here are astounding, and immediately captivating, especially Grazer as Freddy and Herman as Darla who nearly steal the show. It’s why when the film asks you to believe that it’s really about family, and not merchandising, you’re on board.

Freddy, with his wealth of superhero knowledge, helps Billy/Shazam figure out what to do with these new, strange talents. The training montages have a terrific comedic sensibility and Grazer and Levi are perfectly matched for the job. Levi in particular pulls off the tricky feat of playing a disaffected, but still fairly innocent young teenager while wearing spandex and a cape, no less. Grazer, meanwhile, who we’ve seen before in “It,” is beyond his years with his ability to draw a laugh.

That’s not to say the movie is perfect. The beginning gives an extended origin story for both Billy and the little boy who will grow up to become the megalomaniac villain, Dr. Thaddeus Sivana (Mark Strong). Dr. Sivana is woefully underwritten, too, although Strong does his best being the straight, serious guy. For the most part it comes across as less of a threat and more of a buzzkill that gets in the way all the fun we were having with Freddy and Shazam.

Also, as if Dr. Sivana wasn’t enough, the script gives him Seven Deadly Sins as henchmen. These sins take the form of unimaginative and indistinguishable CG gargoyles. I’m not exactly sure what lust or greed would look like in gargoyle form, but I’m pretty certain this isn’t it. They’re also given dubbed voices that feel about as authentic as the voices of the monsters The Power Rangers battled on Saturday mornings.

There’s also a running gag about a strip club that seemed a little retrograde for a current film. But, nitpicks aside, “Shazam!” is just a lightning bolt of unexpected joy that is certainly worth your time and money.

“Shazam!”, a Warner Bros. release, is rated by the Motion Picture Association of America for “for intense sequences of action, language, and suggestive material.” Running time: 132 minutes. Three and a half stars out of four. CC