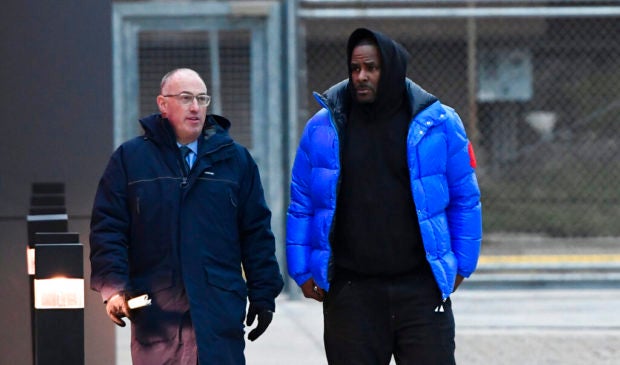 FILE – In this Monday, Feb. 25, 2019 file photo, R. Kelly, right, leaves Cook County Jail with his defense attorney, Steve Greenberg, in Chicago. A strategy seems to be slowly emerging about how R. Kelly and his legal team intend to defend him against charges he sexually abused three girls and an adult woman. Image: AP Photo/Matt Marton, File

CHICAGO — R. Kelly yelled through tears in a recent TV interview before an audience numbering in the millions, saying he’s in a fight for his life to disprove sexual abuse charges. That fight will ultimately be waged in court, with the only audience that matters numbering just 12 jurors.

While the day lawyers deliver opening statements to jurors inside a Cook County courtroom is still many months or even years away, court filings, as well as comments by the R&B star himself and his attorney after charges in February, provide clues about an emerging legal strategy.

Signs are they intend to question the veracity of his accusers and argue that, if he had sex with them, it was consensual and he thought they were of age. His attorney has also signaled he’ll push to have some counts tossed on grounds statutes of limitation ran out or because some are too closely related to crimes for which Kelly was acquitted at his 2008 child pornography trial.

Kelly, 52, was right in more ways than one when he cursed during the interview with Gayle King of “CBS This Morning,” saying: “I’m fighting for my … life.” If convicted on all ten counts of aggravated sexual abuse of three underage girls and one adult, the Grammy winner faces an effective life sentence of up to 70 years in prison.

The defense is expected to fine-tune their argument over coming months that Kelly’s accusers are misrepresenting the facts. For now, there’s not much finesse.

“All of them are lying,” Kelly told King in his only full interview since being charged. “I have been assassinated,” he said. Kelly’s lead attorney, Steve Greenberg, also told reporters the day of Kelly’s arrest, “I think all the women are lying, yes.”

At a Friday pretrial hearing, prosecutors said they weren’t immediately providing the defense with a copy of a video they say shows Kelly having sex with one of the minors because it’s considered child pornography and shouldn’t be distributed to anyone.

“The state’s going to have to give it to us. They can’t play hide the ball,” Greenberg told reporters outside court later. “We’re entitled to see the tape.”

He said the prosecutor’s office has handed over some evidence but still holds the bulk of it.

“I was expecting everything by this point,” he said. “You should be in a position when you indict somebody the next day to turn over all the (evidence).”

Greenberg is best known for representing the accused in several high-profile murder cases, including of former suburban Chicago police officer Drew Peterson. He was convicted in 2012 of killing his third wife in a case reopened after his fourth wife disappeared.

Greenberg is regarded as a savvy, experienced lawyer prone to quips that have sometimes raised eyebrows. In arguing that any sex was consensual, Greenberg told reporters last month about Kelly: “He’s a rock star. He doesn’t need to have nonconsensual sex.”

Prosecutors say they won’t have to depend only on the word of the accusers.

The video Avenatti turned over purportedly shows Kelly having sex with an underage girl 20 years ago while Kelly and the girl say aloud more than 10 times that she’s 14, which could help prove Kelly knew she was a minor.

And another accuser, a hairdresser, says Kelly forced her to perform oral sex on him in 2003 when she was 24.

Prosecutors say a police lab found Kelly’s DNA in semen on a shirt she was wearing that day.

In a defense filing Wednesday, Greenberg questioned the motives of Cook County State’s Attorney Kim Foxx, accusing her of bringing a flimsy criminal case based on old allegations “to thrust herself into the spotlight” of the #MeToo movement, which aims to highlight sexual abuse against women.

Greenberg has also criticized Foxx for public statements in January calling allegations against Kelly in a Lifetime documentary “sickening.” He said characterizing the allegations before charges were even brought illustrated bias and may have tainted the pool of potential jurors, rendering a fair trial impossible. He could revive those arguments in motions to dismiss or in appeals if Kelly is convicted.

The girl in two videos that Avenatti provided to prosecutors — one of which he turned over after Kelly was charged — is the same girl in a similar video at the heart of the 2008 trial.

Greenberg says that means charges related to her violate constitutional protections called “double jeopardy,” designed to thwart overzealous prosecutors from charging people for the same crime for which they’ve already been acquitted.

But legal experts say it’s not that simple.

Double jeopardy shouldn’t apply if it’s not exactly the same incident being charged, said Monu Bedi, a professor at DePaul University College of Law. He said it also doesn’t necessarily apply if it’s the same incident but a different charge. All the 14 counts Kelly faced in 2008 were child pornography, while all 10 this time are sexual abuse, Bedi said.

But Illinois law extends protections against double jeopardy further than the protections provided under the U.S. Constitution. That could help Kelly’s legal team make the case that — when it comes to the girl in the video — prosecutors are unlawfully charging him with the same crime for which he has been acquitted.

Greenberg has said the legal window on bringing at least some of the charges filed against Kelly shut years ago, though he hasn’t fully explained how. Calculating when statutes of limitations run out are complex, relying on variables that are sometimes open to interpretation.

Illinois legislators in 2017 did erase all time limits for charging sexual assault of children and it unambiguously applies to such crimes that happened anytime since 2017. It can’t apply retroactively to older crimes.

But that doesn’t mean any sex abuse by Kelly in the late 1990s can’t be charged now, Bedi said. That’s because older sexual assaults are governed by the statute of limitations as it existed before 2017, when prosecutors had 20 years to charge abuse of children. So, if Kelly sexually abused a minor as far back as the late 1990s, prosecutors should still be within the 20-year charging window. MKH

Dubai finds itself entangled in case against R. Kelly

Read Next
LOOK: An awed Enchong Dee meets ‘Diamond Star’ Maricel Soriano
EDITORS' PICK
Beyond the Chocolate Hills: A farm-to-table, heritage culinary adventure of Bohol
Metro Manila logged most number of new COVID-19 cases — OCTA Research
WHO says monkeypox is not yet a health emergency
A massive highway complex makes living in the South highly attractive
Guarding Sara: Why next VP is getting own security team
House energy committee chair Arroyo bats for cheap electricity
MOST READ
Leon Barretto steps up for sisters, asks dad Dennis Padilla: ‘Please stop resorting to public shaming’
LOOK: Rita Daniela pregnant with first child
Marjorie Barretto to speak up on Dennis Padilla, kids’ relationship ‘in time’
Guarding Sara: Why next VP is getting own security team
Don't miss out on the latest news and information.