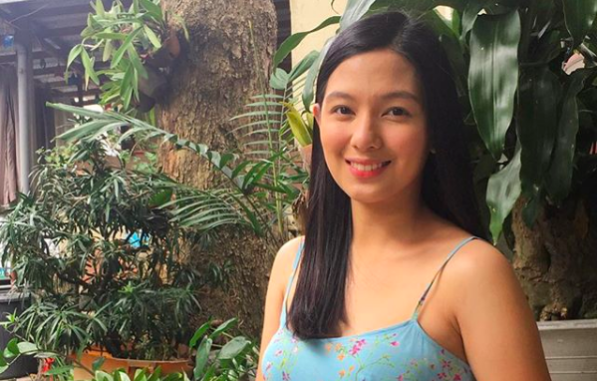 Garcia narrated a story about her 3 1/2-year-old Mori and how the tot was able to keep herself amused all on her own just by using her imagination. This was a stark difference from before when Mori would cry and throw tantrums in public when she was bored or wanted to play on the phone.

“I am in awe of how she managed to keep herself busy with no help from me or her Tatay,” Garcia wrote via Instagram on March 21. She, husband Alwyn Uytingco and Mori were apparently at a furniture store at the time.

“In her imaginative mind, she turned a simple chair into a washing machine. A candle holder became a watering can and a picture frame became a blackboard (her fingers were her pretend chalk).”

Garcia further shared that Mori asked her if they could leave, but Garcia told her Uytingco has to pay first. Instead of making a scene, Mori patiently waited and took to her book to keep herself entertained.

“What she did next was open her book rest comfortably on a couch. To think she cannot even read yet! For a whole hour and a half, Mori was such a joy to be with.”

Garcia recalled past incidents when Mori would go on “full blown” tantrums in public because she wanted to use her phone or was too bored to wait for her parents, and noted the change in her daughter.

“She finally understood that whining, screaming, crying will not get her what she wants,” she said. “Napapahiya pa ko dati sa palengke, sa park, sa mall. Pinagtitinginan kami ng mga tao but here we are now.”

(Before, I would get embarrassed when we were in the market, a park, or the mall. People would stare at us, but here we are now.)

She then encouraged fellow mothers who are trying to limit their children’s media exposure by telling them the efforts are all worth it in the end. She also advised them to be good examples to their children since they will mimic what they do.

“Kaya mo yan (you can do it), be clear on what is allowed, what isn’t while being calm and respectful to the child,” said Garcia. “You want to refrain from using your phone also when they are awake. Read a book, do hand work, chores and they will mimic this without you asking them to do so.”  /ra