(First of a three-part series)

LOS ANGELES—“This season, because so many of the characters die, we decided to wait until the actors got the scripts,” said David Benioff, cocreator and showrunner of “Game of Thrones.” We were seated in a production office at the Titanic Studios (yes, where the real Titanic, not James Cameron’s version, was painted) in Belfast, where the main cast did a final table read and found out whether their characters die or survive.

It was February last year when we went to Northern Ireland to interview and visit the HBO epic fantasy series’ various sets, from King’s Landing, Winterfell to Castle Black. It was like a top-secret operation—our phone cameras were covered with stickers by the guards, our badges were scanned, and we had to sign an embargo agreement that our pieces and photos would appear more than a year later, close to the premiere of the show’s final season.

“So we didn’t do the death calls because there were just far too many,” David continued about his and fellow creator DB Weiss’ (whom he calls Dan) practice of calling an actor to inform him that his character will die. “But yeah, it’s always been a little painful, especially in the later seasons when we have gotten to work with people for so long.” 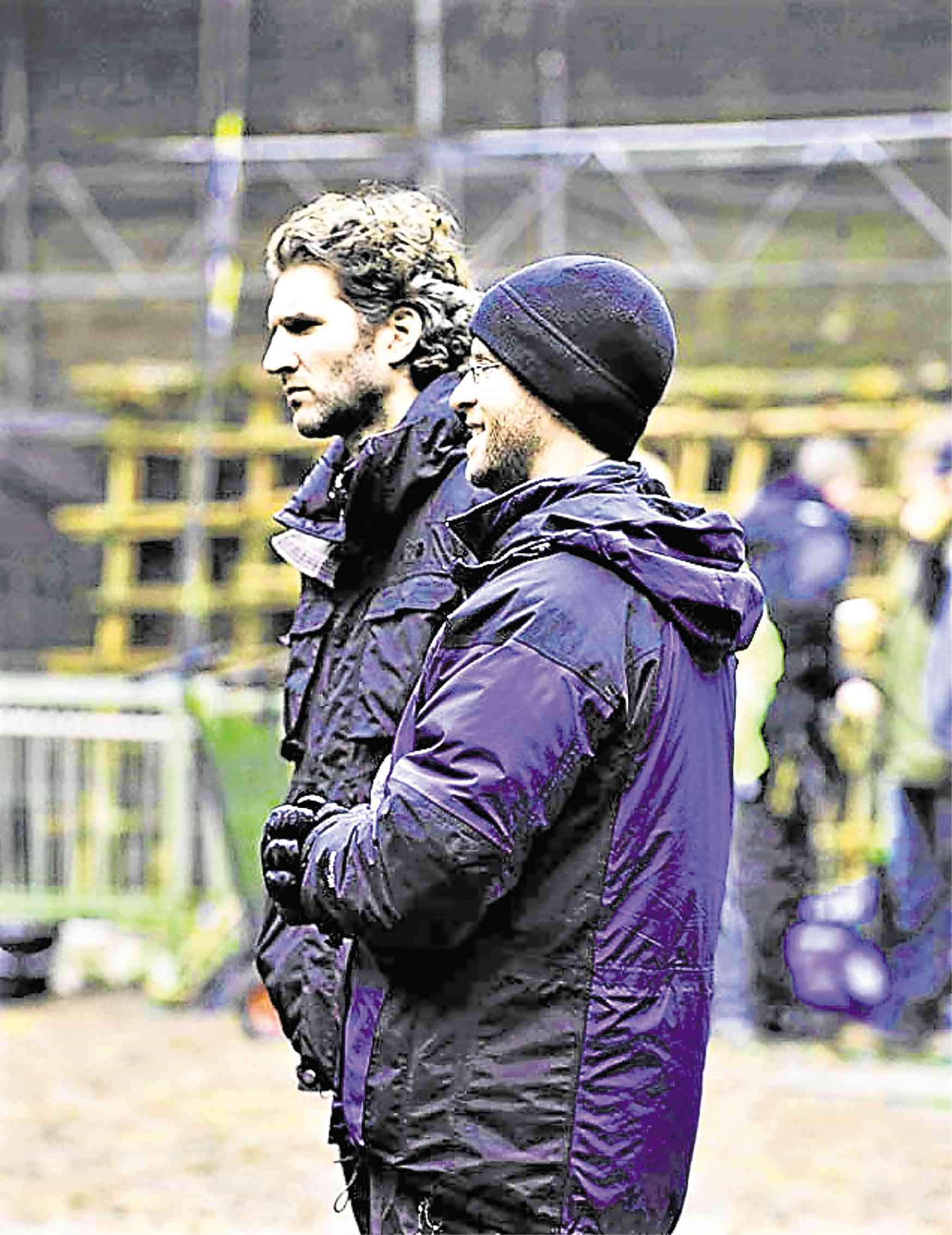 On this day in the Titanic Studios, where its humongous hangars have been converted to soundstages for “Game of Thrones,” we also interviewed Kit Harington.

Earlier, David told us, “We needed Deb Riley (production designer), our brilliant production designer, to top herself. I have been working in this business for awhile now. I have never seen sets that equal these ones. It’s quite remarkable for the directors to be able to shoot in a place like Winterfell where you aren’t blocked off in terms of shooting angles.

“We are hoping that we can keep it up just for fans to be able to come here and walk through Winterfell or the streets of King’s Landing.”

“It’s bittersweet,” David said about cowriting and filming Season 8 which premieres on April 14, when the series’ rabid fans will finally learn the fate of Jon Snow, Daenerys Targaryen and the other folks in the adaptation of George RR Martin’s “A Song of Ice and Fire.”

“It’s strange thinking back to the pilot, when we did it nine years ago now,” he said. “So many of the original cast have been killed off, and they are not there anymore.”

“Thanks to us,” he quipped about the scores of characters who were killed. “George gets some of the blame, as well. And the ones who survived it have grown.  We cast three children, Sophie (Turner), Maisie (Williams) and Isaac (Hempstead Wright). They are now adults and have grown into incredible actors. It was thrilling on the one hand and also very sad when we finished the final script, because the show has become a family. There’s genuine love and affection among us and the cast, and it’s going to end now.”

He disclosed, “The last real day of production, aside from the effects shots, will be at the end of June (2018). It’s sad to think that we won’t be together for much longer.  But at the same time, it feels like the right time for us to end. The story has been approaching its climax. It’s hard to keep a show together for more than eight years.

“Dan and I are definitely feeling the pressure to give the fans an ending that they deserve, and partly for ourselves, because this is the greatest job that we have ever had. It’s the project we probably will be remembered for. You don’t want to f*** it up on the final lap (laughs).”

On how he and Dan consulted with George on how he was planning to end his books, David explained, “About five years ago, I think it was after Season Three, Dan and I and Bryan Cogman, one of our writers, went to Santa Fe (New Mexico) and spent a week with George. We wanted to know some more information from him about where the series was going.

“What George always says is that there are two kinds of writers—the gardeners and the architects. The architects plan everything out and have a very detailed outline, showing exactly where they are going. The gardeners plant seeds and watch to see how things grow.  George is very much a gardener, which means that he doesn’t have the entire thing planned out from the beginning.

“So, one thing that we realized from that meeting was … we had to figure out for ourselves a lot of stuff that was going on.

“But George did give us some crucial pointers in terms of the endgame. The books will come out after the series is over, and it’s good for the readers not to know exactly what is in the books and what is in the series beforehand, so we don’t spoil it for George.”

While David and his team are making every effort to keep the details of Season 8 a big mystery, he obliged with a general idea on what to expect. “In terms of at least the beginning of the season … there’s a convergence on Winterfell which you saw at the end of episode 707 where Dany (Daenerys), Jon and their forces are heading back to Winterfell. We saw Jaime (Nikolaj Coster-Waldau) riding north.

“So one of the things that has been interesting about this final season is that, for so much of the series, all the characters have been in these far-flung places.

“When we were planning the seasons, we used to have different colored index cards for all the different subplots. At one point, we had seven different colors, and we were running out of the primary colors. One of the things that has been unusual about this season, both for writing, scheduling and everything else, is that most of the people are in the same place. So we can’t use the different colored cards.

“So, part of the reason that this season is taking so much longer to shoot is because you can’t have two full units shooting concurrently for the entire season.” 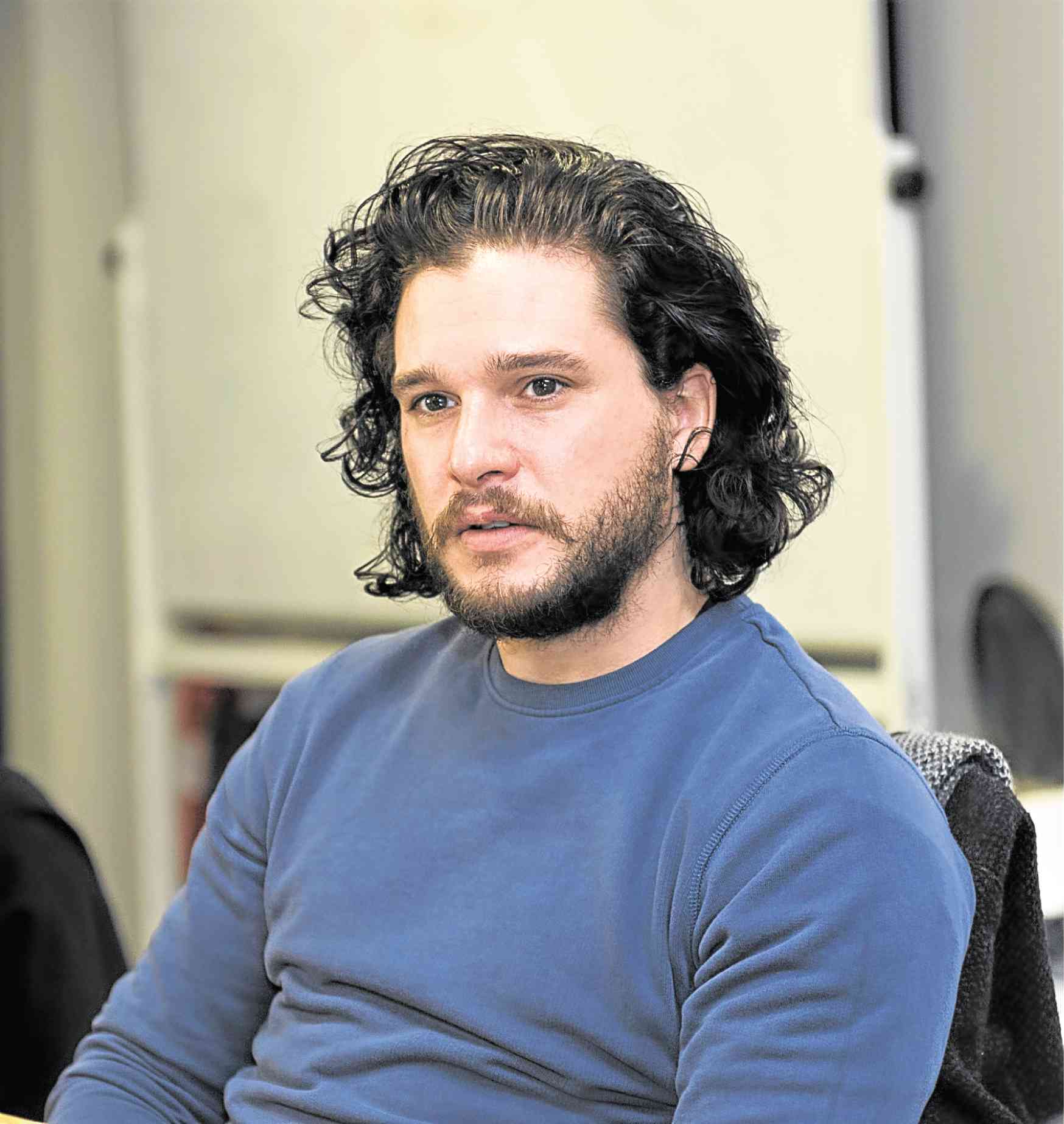 “I found this much more emotionally pressing than I thought it was going to be,” said Kit, relaxed in a blue shirt, black jacket and blue jeans. “I’ve never been in this kind of emotional journey like in anything I’ve done previously. I feel that some of me is like leaving school. There’s part of me that’s like a teenager just wanting to get out into the real world. The other half of me feels like I’m tugging on my parents’ apron strings, not wanting to leave.

“Those two things are pulling at each other. But the one thing that I do know and the one thing that all the actors feel and everyone involved feels is that everything with ‘Thrones’ felt so right, that this feels like the right journey to finishing it. I feel like I’m very ready for it to end, but very sad to see it go.”

Asked for a definitive moment as Jon Snow, Kit answered, “I had my last scene on a horse and that sounds bizarre but I suddenly went, ‘I don’t get to come back and just do horse riding anymore.’ I turned into quite a good horseman.”

And his favorite set? “One of my favorite sets, although I’ve never spent any time on it in the show, is the throne room. But my other favorite sets are [those in] Castle Black where I spent so much time on.”

Kit talked about the large cast of actors: “The thing I like about the actors and everybody who work on ‘Thrones’ is there’s an absolute complete pure focus when there needs to be. Outside of that, there’s a lot of fun to be had. We get on so well. We’ve always loved each other. 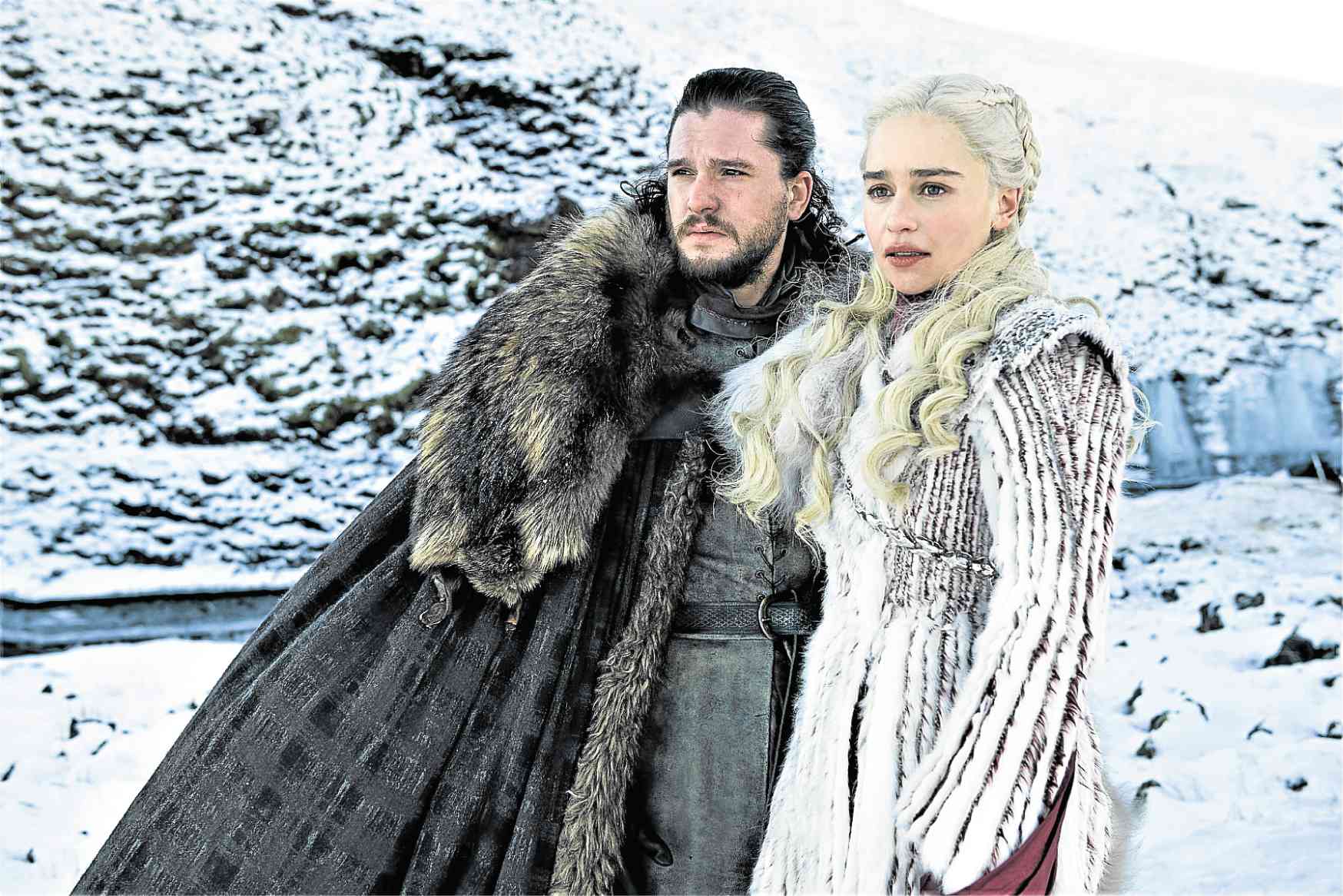 “There’s no one who’s ever had beef with anyone else in  ‘Thrones.’ It’s amazing having that many egos in a tent and no one fighting.”

He shared his take on that memorable final read-through in this room. “I sat where you are,” Kit pointed out. “David and Dan were here. They stood up at the beginning and said some nice words. This room was packed to the edges. Everyone was in this room for it. There were cameras filming it for the documentary and posterity.

“David and Dan said they were looking at me to see what my reactions were through it. They said they were priceless. We had tears at the end pretty much.

“There was a standing ovation. I broke down. I just started sobbing. There were a lot of people who were doing exactly the same.”

As to which prop he coveted, Kit quickly replied, “The Longclaw (Jon Snow’s steel sword), but I don’t think they’ll ever give it to me because it is probably worth about 40 grand.” 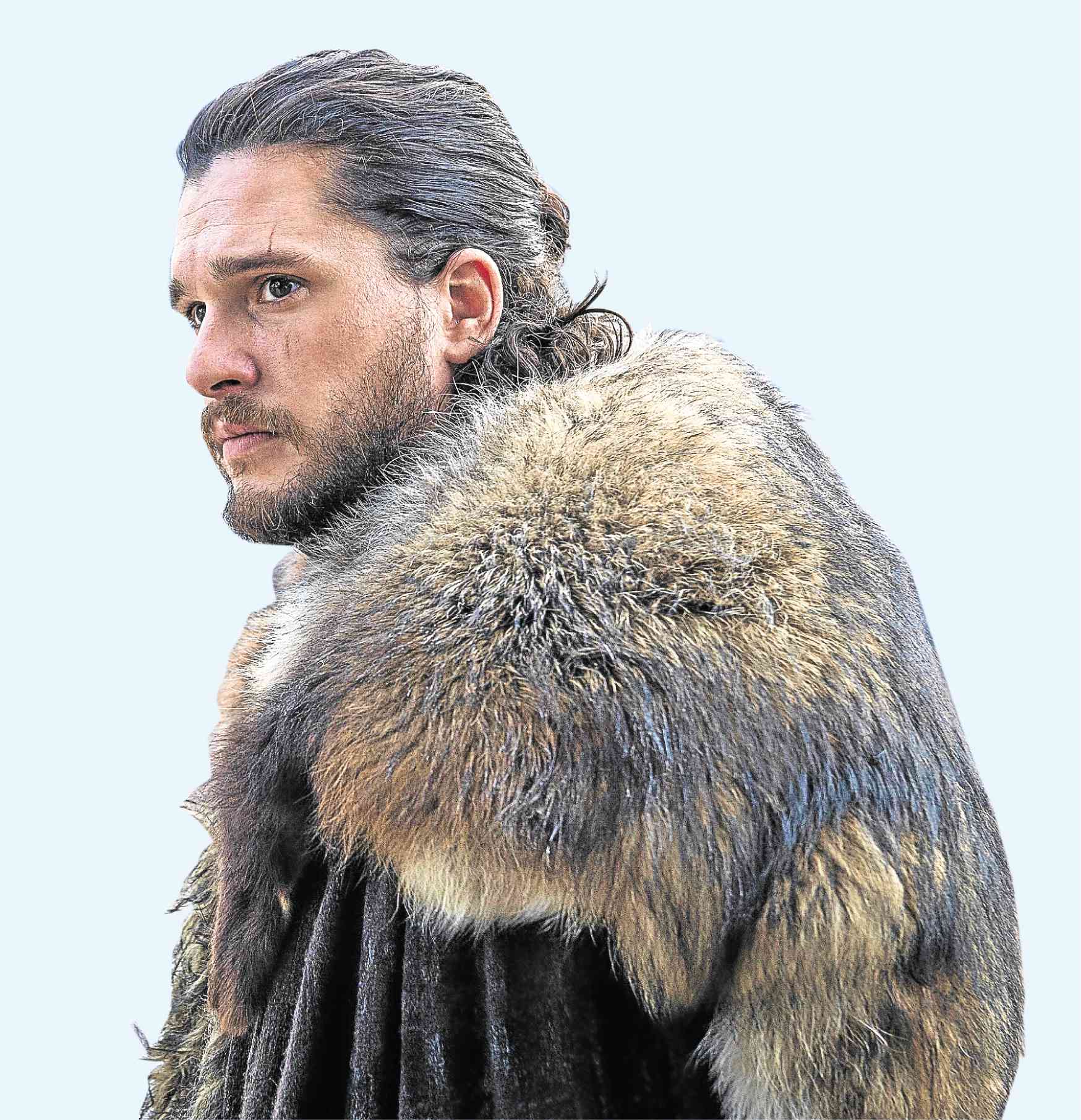