Fed up with the drudgery of his sales job in southern China, Lu Qi quit and traveled a thousand kilometers north to one of the country’s biggest film studios with hopes of making it in movies. 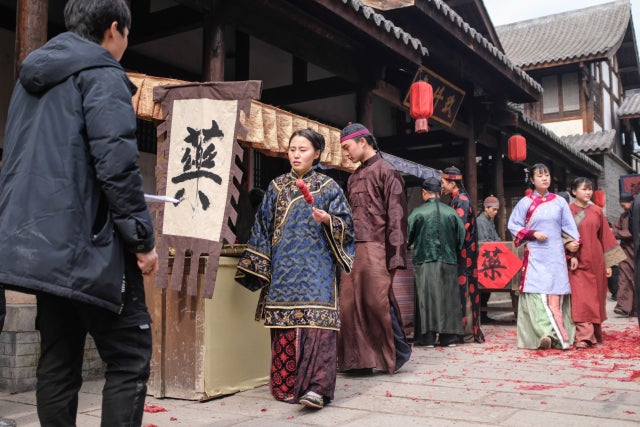 That dream remains a work in progress for Lu and thousands like him who eke out a precarious living as extras at Hengdian World Studios.

Just as movie-goers use film to escape reality, so too do many of Hengdian’s army of more than 6,000 extras.

“I failed so many times (in sales) and haven’t made much progress,” said Lu, his head shaved bald save for a knit cap keeping it warm.

“Most people here have no degrees, skills or relations. (We) can’t do any business either, so we are just here to escape the reality and the competition out there,” the 24-year-old added.

Hengdian, in eastern China’s Zhejiang province, was once a poverty-stricken town amid rugged hills. But in the mid-1990s the investment firm Hengdian Group expanded into movies.

It bulldozed the landscape and erected the mammoth studio complex, which now claims to be the world’s largest film and TV shooting base.

Sometimes dubbed the “Hollywood of the East” or simply “Chinawood”, local media reported more than 70 percent of China’s films and TV shows have been at least partly shot on a 330-hectare (1.3 sq mile) site.

Sets range from ancient palace complexes that can accommodate casts of thousands to contemporary mansions and modern green screens.

“You can complete a Beijing-Hong Kong trip in one day,” Hengdian tour guide Wu Rongrong declared as she stood before a life-sized reproduction of Beijing’s Forbidden City while gesturing toward a replica of an old Hong Kong street complete with opium bars.

The studio has been the backdrop for Chinese blockbusters like “Hero” (2002) and has been graced by A-listers like Jackie Chan and Fan Bingbing.

Its growth has outrun the local supply of manpower.

“At first, we recruited mostly locals as extras. Now the majority of them come from out of town,” said Zhou Fenglai, a Hengdian official who deals with performer management.

Lian Chunyu grew up on horseback on the plains of China’s Inner Mongolia region, before parlaying that experience into work as a Hengdian stunt rider for eight years.

Even though his face is never seen in movies, it’s still a thrill to be part of it.

“It would be difficult for me to get used to doing something else after this,” he said.

Lu, who spends a few months a year in Hengdian and the rest at home in Guangdong province, checks his WeChat group messages each morning for studio work, usually finding something daily.

Male extras get an additional 40 yuan each time they shave their heads — partly to make sure there is ample manpower for often used scenes requiring the Manchu-style shaved head and braided queue.

As well as the extra cash, Lu also likes that such a specific look rules him out of military roles.

“It’s very uncomfortable running around in the mountains wearing armor and being blown up,” Lu said, comparing it to work as a “coolie.”

Between scenes, Lu shoots videos of himself with props and costumes, which he uploads to social media. Many extras do live online broadcasts and performances, making additional money via digital payments from their followers, he said.

One downside: being barked at and herded like cattle.

“Most film crews are really terrible, cursing people and such. That’s despicable. The bigger the production team, the worse they are,” said Wang Xiaopin, a 47-year-old extra from central Henan province.

“It doesn’t matter how well you perform. In their eyes, you will always be unqualified.”

China’s entertainment sector has blossomed in recent years as the government looks to build up the domestic industry and replace imported foreign content with homegrown fare.

But many projects have been put on hold after the government last year began cracking down on alleged widespread tax evasion and exorbitant pay for big-name stars.

That has made work more scarce for now, and while sources at Hengdian say some extras have left, Lu remains optimistic.

“I still want to be an actor,” Lu explained, adding: “I believe the future will be better than the past.” NVG

China sci-fi blockbuster blasts off at the box office