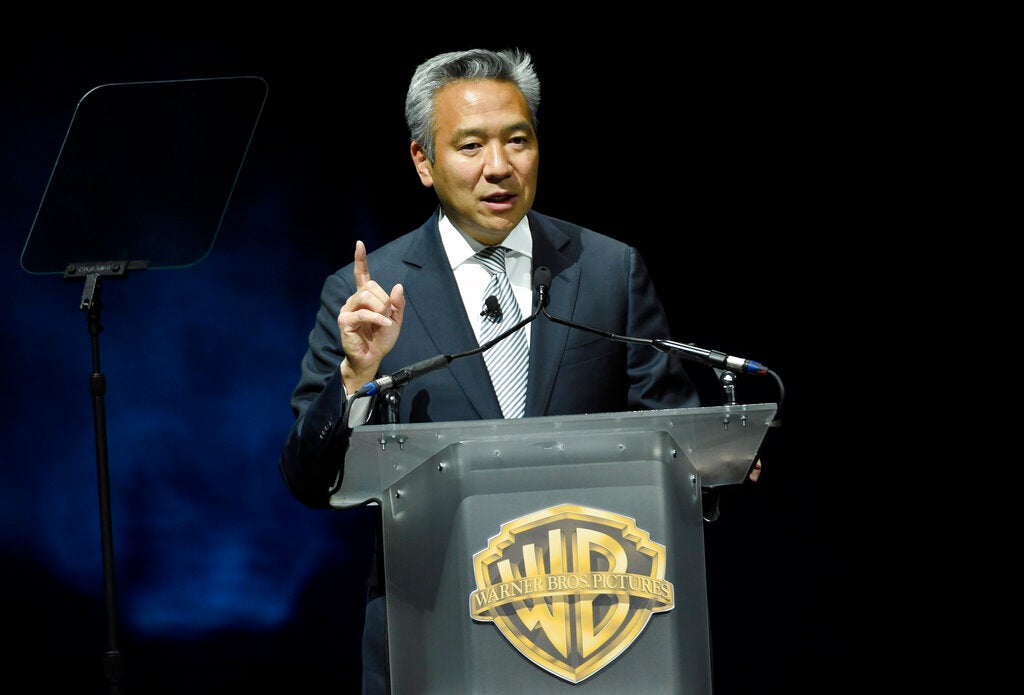 FILE – This April 21, 2015 file photo shows Kevin Tsujihara, chairman and CEO of Warner Bros., during the Warner Bros. presentation at CinemaCon 2015 in Las Vegas. Tsujihara is stepping down after claims that he promised acting roles in exchange for sex. As Warner Bros. chairman and chief executive officer at one of Hollywood’s most powerful and prestigious studios, Tsujihara is one of the highest-ranking executives to be felled by sexual misconduct allegations. Image: Chris Pizzello/Invision/AP, File

NEW YORK — Warner Bros. chief Kevin Tsujihara, one of the highest ranking Hollywood executives to be felled by sexual misconduct allegations, stepped down from the studio Monday following claims that he promised roles to an actress with whom he was having an affair.

“Kevin has contributed greatly to the studio’s success over the past 25 years and for that we thank him,” said Stankey.

“Kevin acknowledges that his mistakes are inconsistent with the company’s leadership expectations and could impact the company’s ability to execute going forward.”

Earlier this month, WarnerMedia launched an investigation after a March 6 Hollywood Reporter story detailed text messages between Tsujihara and British actress Charlotte Kirk going back to 2013. The messages suggested a quid pro quo sexual relationship between the aspiring actress and the studio head in which he made promises that he’d introduce her to influential executives and she’d be considered for roles in movies and television.

In a memo to Warner Bros. staff on Monday, Tsujihara said he was departing “after lengthy introspection, and discussions with John Stankey over the past week.”

“It has become clear that my continued leadership could be a distraction and an obstacle to the company’s continued success,” said Tsujihara. “The hard work of everyone within our organization is truly admirable, and I won’t let media attention on my past detract from all the great work the team is doing.”

Tsujihara’s attorney, Bert H. Deixler, earlier stated that Tsujihara “had no direct role in the hiring of this actress.” He declined further comment Monday.

Tsujihara, who has headed the Burbank, California, studio since 2013, earlier pledged to fully cooperate with the studio’s investigation and apologized to Warner Bros. staff for “mistakes in my personal life that have caused pain and embarrassment to the people I love the most.”

The scandal unfolded just as Warner Bros. was restructuring on the heels of AT&T’s takeover of WarnerMedia, previously known as Time Warner. Tsujihara’s role had just been expanded on Feb. 28 to include global kids and family entertainment including oversight of Adult Swim and the Cartoon Network.

Kirk appeared in Warner Bros.’ “How to Be Single” in 2016 and “Ocean’s 8” in 2018. She has denied any inappropriate behavior on the part of Tsujihara or two other executives, Brett Ratner and James Packer, who she communicated with. “Mr. Tsujihara never promised me anything,” Kirk said in an earlier statement.

But the details of the leaked text messages between Tsujihara and Kirk immediately put his future at Warner Bros. in jeopardy. Kirk wrote in one 2015 message to him: “Are u going to help me like u said u would?” Tsujhara responded, “Richard will be reaching out to u tonight,” referring to Richard Brener, president of Warner Bros.’ New Line label.

Other exchanges suggested the kind of give-and-take of Hollywood’s “casting couch” culture. Kirk was introduced to Tsujihara by James Packer, the Australian billionaire. Warner Bros. was then finalizing a $450-million co-financing deal with Packer and Brett Ratner, the director-producer. In a message to Ratner, Kirk said she was “used as icing on the cake.”

WarnerMedia, the studio’s parent company, said Monday that its internal investigation into the situation, carried out by a third-party law firm, will continue.

Tsujihara’s exit follows other high-profile executive departures in the post-Harvey Weinstein #MeToo era. CBS Chairman Leslie Moonves was pushed out after numerous women accused him of sexual harassment. Walt Disney Animation chief John Lasseter was ousted after he acknowledged missteps in his behavior with employees.

The 54-year-old Tsujihara, the first executive of Asian descent to head a major Hollywood studio, presided over a largely positive Warner Bros. era with little fanfare. A former home video and video game executive at the company, Tsujihara focused on franchise creation, some of which have worked, some of which haven’t.

After poor marks from fans and critics, the studio’s DC Comics films have recently been retooled and found their footing in hits like “Wonder Woman” and “Aquaman.” Other franchises — like “The Lego Movie” and the “Harry Potter” spinoff “Fantastic Beasts and Where to Find Them” — have seen diminishing returns on their latest incarnations. The studio has also fostered its connection with filmmakers like Christopher Nolan (“Dunkirk”) and Bradley Cooper (whose “A Star Is Born” was Warner Bros.’ top Oscar contender). Warner Bros. last year amassed $5.6 billion in global ticket sales, its best haul ever.

The studio will now begin a search for a new chief as it also prepares to launch a streaming service designed to compete with Netflix. MKH