What stunning Kate Beckinsale says she isn’t good at 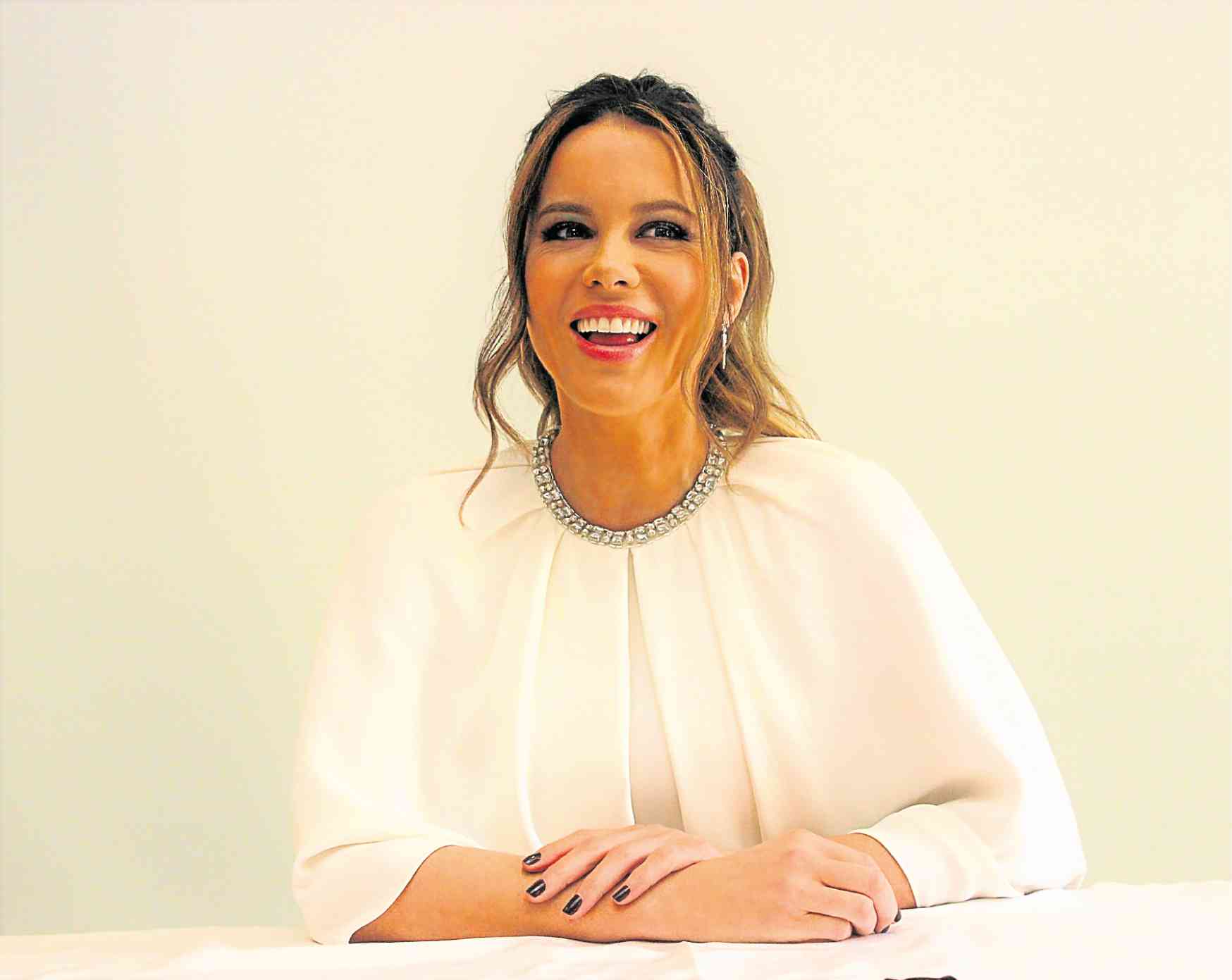 LOS ANGELES—“Like a horrible fossil,” Kate Beckinsale quipped with a laugh when she was told that she is ageless. One of the most beautiful actresses in cinema was stunning in a white Reem Acra blouse and pants.

“I haven’t done very much of it,” Kate said when asked if it’s harder for an actress like her to date. She and comedian Pete Davidson, 25, have been an item since they were first seen together in a Golden Globe Awards after-party in January. “I’ve had five boyfriends my whole life, so I’m probably not a big expert on dating (laughs).”

Those lucky gents include ex-husband, director Len Wiseman; actor Michael Sheen, with whom she has a daughter, Lily Sheen, 20; and Jack Whitehall, who’s also a comedian.

Pete, who was engaged to Ariana Grande until they called off their engagement last October, said about dating Kate, 45, in a TV interview, “Apparently, people have a crazy fascination with our age difference, but it doesn’t really bother us.”

In the middle of answering a question during our chat in Los Angeles, Henry Winkler, whom we had just interviewed, showed up. “Henry Winkler is here!” she exclaimed with a laugh. “Let’s stop.” She stood up to greet and hug the veteran actor. 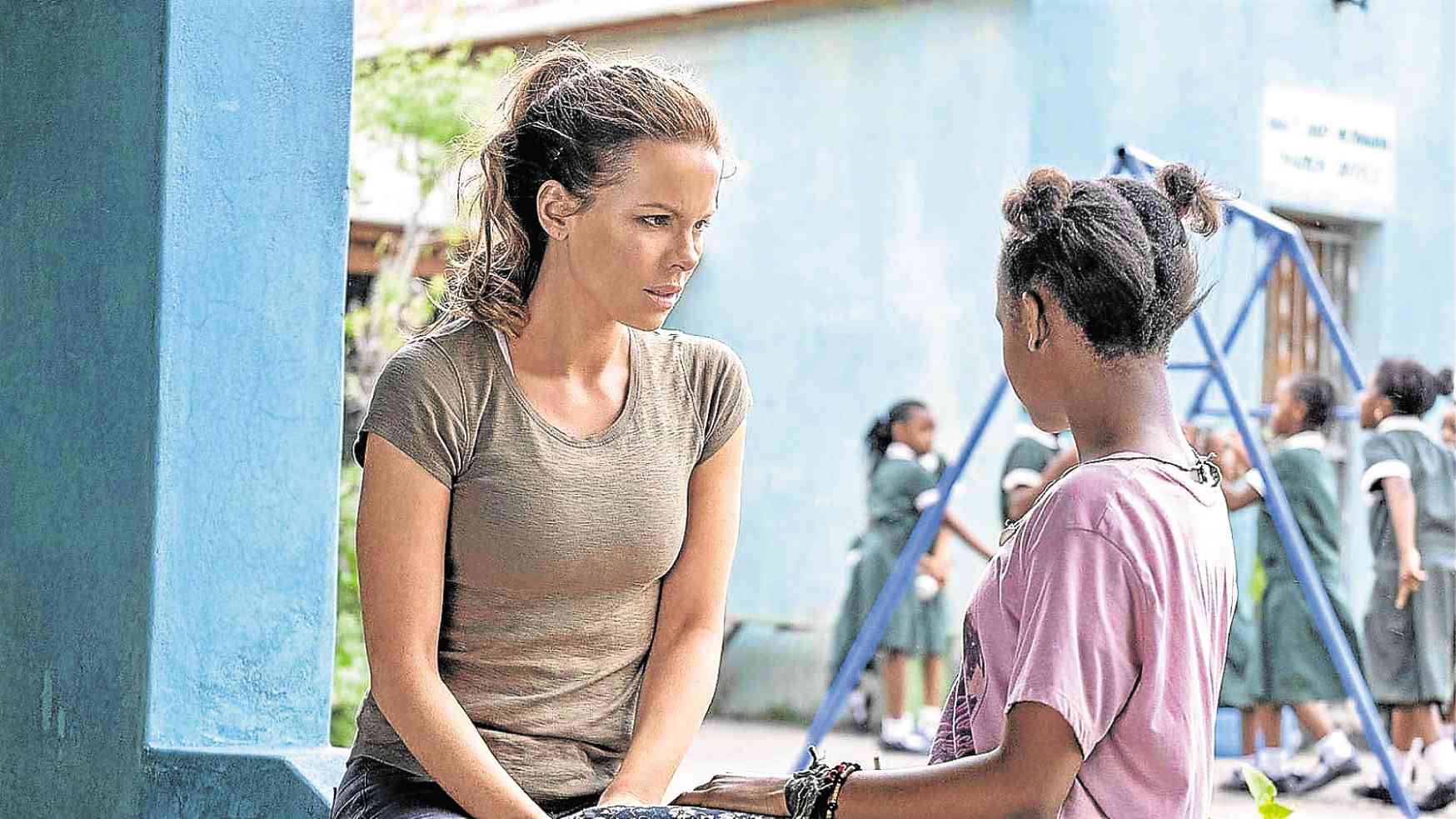 Scene from “The Widow” —PHOTO FROM AMAZON PRIME VIDEO

After returning to her seat to resume the interview, the English actress cracked, “Six (boyfriends), if we’re counting Henry Winkler.”

In “The Widow,” her new series on both British ITV and Amazon, Kate plays Georgia Wells, who is mourning the loss of her husband in an airplane explosion over Congo. But her hermit-like existence in Wales was upended when she glimpsed her husband’s baseball cap on the TV news. Believing that her husband might still be alive, she impulsively goes to Congo to find the truth.

In one scene, Kate’s Georgia was warned by a friend, “Courage and stupidity are often confused with each other.” Asked to comment on that line, the London native answered, “That’s a case-by-case basis. There were definitely times when I’ve thought I’d fallen in love, but it turned out I was being stupid, but not recently.”

On how her character’s honesty resonates with her, Kate pointed out, “I’m bad at lying, which is why I used to be such a fun interview because I’ll say everything, then get myself in trouble. I had to get better at that. It took me a long time to figure out that quite a lot of people aren’t bad at lying. What I’ve learned is you can’t necessarily always figure out what is being concealed from you, or what they’re being deceptive about.”

Back to being youthful, Kate demurred, “I definitely look older than I did when I was in my 20s. I just have better style than I had. I don’t wear talcum powder on my face anymore. That makes your teeth look yellow, which I now realized. 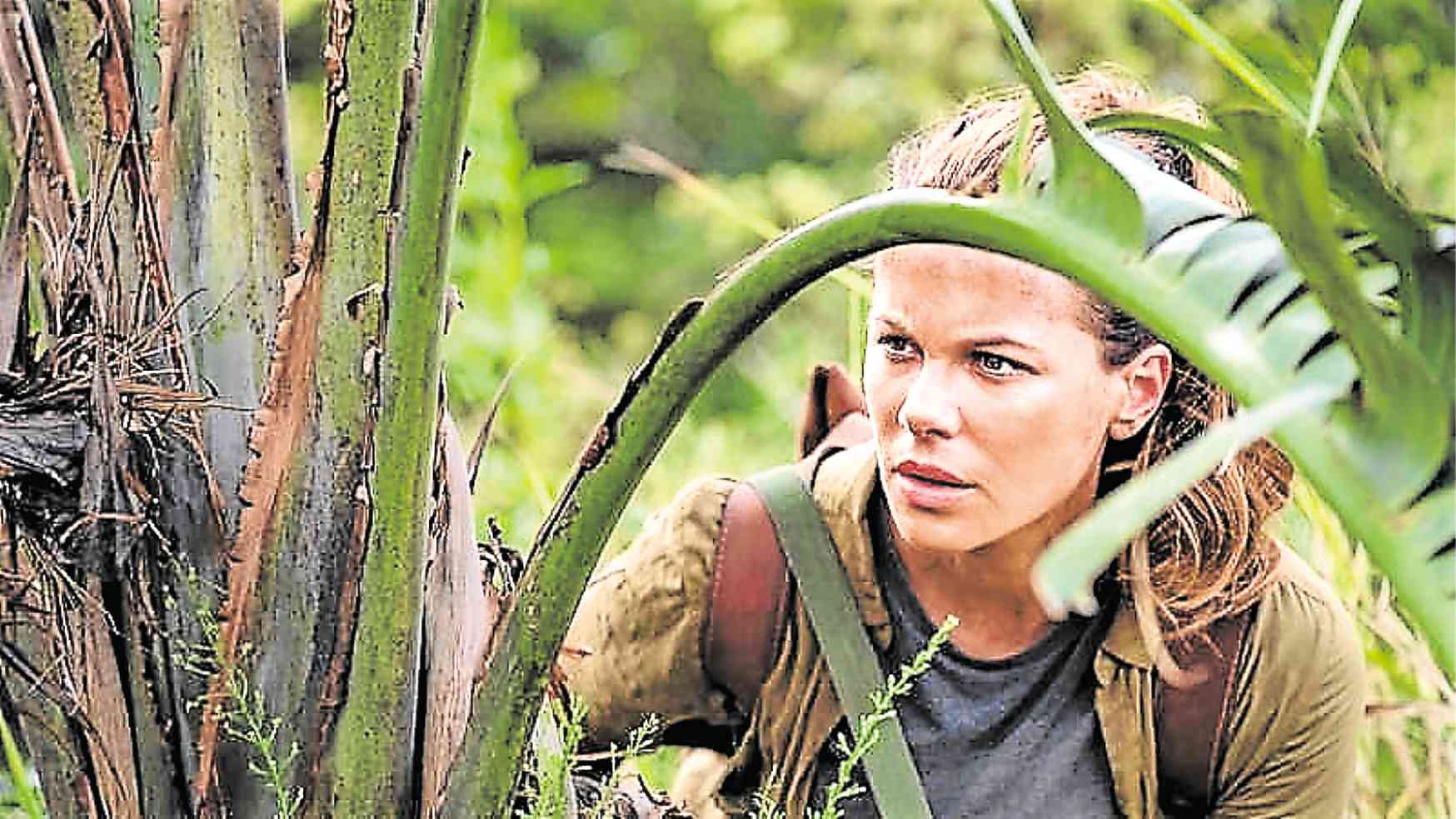 Scene from “The Widow” —PHOTO FROM AMAZON PRIME VIDEO

“I came to exercise reasonably late. Nobody moved in England when I was growing up. We all sat down. I work out now. I do like that. Being happier helps—getting out of certain situations that drag you down.”

On how strict she is with her diet, the Oxford University alumna replied, “I’m allergic to quite a lot of things. That happened in the last eight years or so. Literally, you could kill me with pizza. I couldn’t get up for a week. Chocolate chip cookies and French fries can slip through the net.

“There are certain combinations of things that will take me out. So, on the whole, I’m quite careful [about what I eat] because I don’t like feeling ill. But I’m not hugely obsessive.”

As for filming during hot and humid months in South Africa, Kate said, “I hate seeing actors talk about how difficult their work is. Other people find that incredibly irritating. It’s such a privilege to be an actor. But it was six months, so it was a long time to be far away from home.

“Usually, if I do a physical role, it’s over a period of three or four months. Then, you get to go home, eat some donuts and lie down in your bed, whereas sustaining it over six months was really the hardest thing. And also battling with weather I wasn’t used to. It’s one thing being in Budapest running down the street and it’s quite cold, but in Cape Town, it was really hot.

“When we first arrived, it was their summer so we all got quite close because we got to know what each other’s armpits smelled like very quickly. My character is the unluckiest person in the whole world. Every terrible thing you can think of happens to her, or almost happens to her. Six months is quite a long time to spend with her.”

“The dangerous thing about actors being trained in fighting is that you do feel like that and you probably couldn’t,” replied Kate, who figures in action scenes in “The Widow,” on whether she could fight and survive in real life. Laughing, she added, “But I could look really cool while I’m getting beaten up.”

The actress, who earned an action star reputation with her “Underworld” movie series, admitted that she was not good at one thing. “What I have never gotten good at is, I was very bad at running when I did my first-ever action movie,” she bared. “I had to be coached because I ran like this (she demonstrates running clumsily). 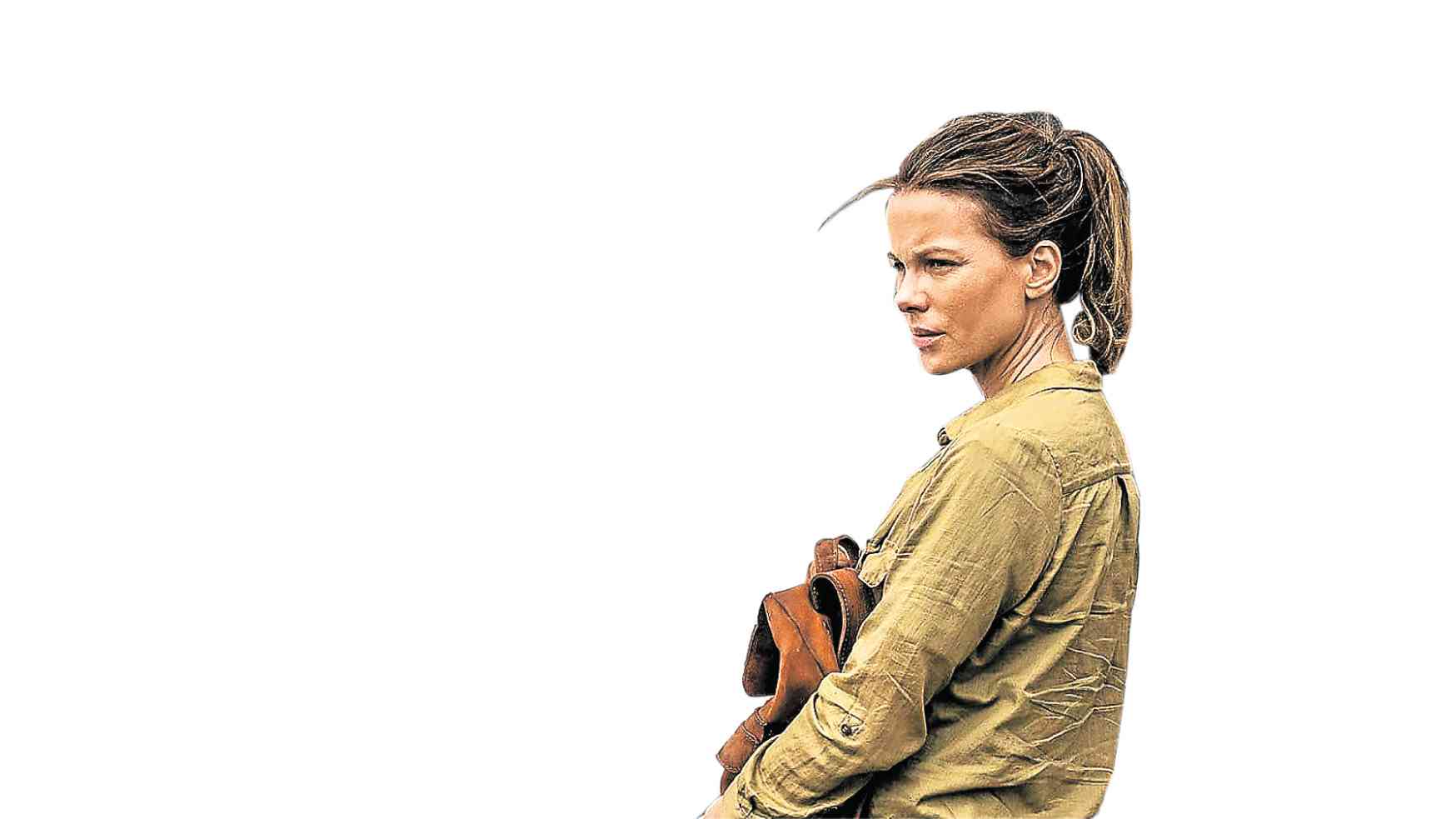 “And what I’m also terrible at is stopping, so I can run fast and make it look reasonably cool, but I cannot stop. I would just be a floater out the door.”

She addressed some comments that “The Widow” perpetuates the canon of white savior narratives: “If this were a film about Georgia rescuing Africans, I don’t know that I’d have wanted to necessarily do that. The point about it was that she was trying to find her husband and so, along the way, she had both good and bad relationships with local people.

“I don’t feel that the thrust of this show is about a white woman. There’s a woman who’s lost—and bonds with—a child. The point is that she’s lost her husband. And she’s going to this uncle in a place [with] a complex cultural and political situation. She’s not wading into it as, ‘I’m going all-out and teaching you how to sing the national anthem.’ It’s not like that at all. If anything, she’s going, ‘Please teach me things that I don’t know.’”

On her daughter Lily, the mom said, “I’m sure she will end up being an actress and that does freak me out a little bit (laughs). It freaks me out that she’s walking around by herself. I haven’t gotten past ‘putting her in a high chair and she doesn’t move’ stage.”

A spitting image of her mom, Lily grew up in the paparazzi world. “It’s harder for the child,” Kate remarked. “It’s something that is incredibly intrusive for them, especially outside a ballet class or something that isn’t a public event. The worst one was Lily getting very ill in a car and us having to jump out and her being sick on the road. And people jumping out and taking pictures of that.

“That’s why I thought, OK, this has reached a level that is beyond as a human being. I don’t understand why anybody would want to take a picture of a child being sick.”

But Kate shared that Lily was savvier. “I started in the ‘prehistoric era,’ where you were allowed to actually have a life. But Lily knows more now than I do. I’m still shocked by new things. She’s got much more of a handle on probably what that’s like than I do.”