‘Apollo 11’ brought back to life by vintage film format 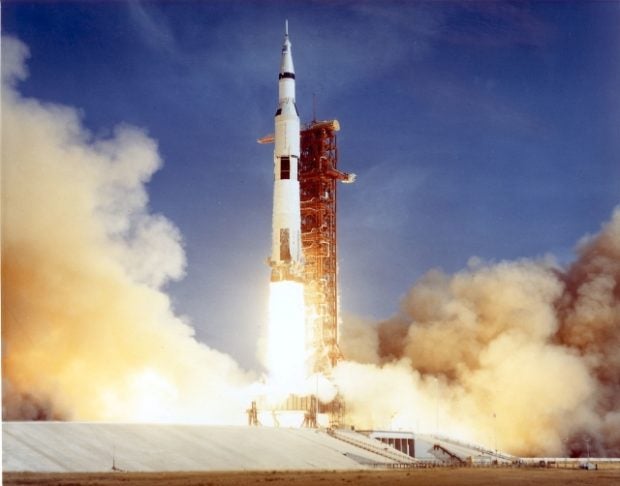 The Apollo 11 Saturn V space vehicle lifts off 16 July 1969 with astronauts Neil A. Armstrong, Michael Collins, and Edwin E. Aldrin aboard. During the eight day mission, Armstrong and Aldrin descended to the moon for 22 hours, including 2 and 1/2 hours outside the lunar module, while Collins orbited overhead in the command module. Armstrong and Aldrin gathered samples of lunar material and deployed scientific experiments before joining Collins for the return trip to Earth. Image: NASA via AFP

New documentary “Apollo 11”, which tells the story of man’s first steps on the Moon, contains footage so striking that it seems practically a crime that it remained hidden for nearly five decades.

The film — which premiered at Sundance in January but only hit US theaters this weekend — injects new life into the most famous space mission of all time, which transfixed the world from July 16-24, 1969.

It blends images that are well known with long lost gems found in a National Archives warehouse and digitized for the first time.

The visuals are mesmerizing: seen in color in a theater, the tracks of the giant NASA crawler-transporter — used to carry the massive Saturn V rocket that launched the crew into space — fill the entire screen.

The captivating shots were a few of the many found on 177 65 mm reels uncovered by Dan Rooney, supervisory archivist of the National Archives film section.

They were found poorly labeled, without any real indication of their contents except for a generic “Apollo 11”, at a storage facility in the Maryland suburbs where the temperature was below freezing.

“We knew these large format holdings existed, but it took a lot of research to really understand what was there,” said Rooney, who worked with Miller to bring the reels to the silver screen.

“The real discovery part was in the research that led us to a lot of new information about the content and the quality of the material.”

Only a part of the trove was used for the 1972 film “Moonwalk One”.

NASA probably didn’t use the reels “because of the difficulty of working with these large formats, and they probably lacked the equipment and the expertise,” said Rooney.

Is there any more footage?

NASA used the large formats for filming ground operations at the Kennedy Space Center, and on the ship used to retrieve astronauts Neil Armstrong, Buzz Aldrin and Michael Collins at the end of their historic mission.

As the camera pans from the top to the bottom of the rocket, viewers get a sense of its sheer enormity, as the astronauts silently pull on their suits.

Also captured is the space mania among the general public of the time, as thousands took to Cocoa Beach to watch the launch, binoculars in hand.

In the firing room and at mission control in Houston, rows and rows of male engineers are seen in white shirts and dark ties, as opposed to the somewhat more gender balanced teams at NASA and SpaceX today.

In contrast to the large format images, many shot in smaller formats by the astronauts aboard the Apollo capsule and on the Moon were already on YouTube.

But the director re-digitized some that were previously only seen in mediocre quality, such as the nail-biting landing of the Eagle lunar module. Brilliant color photos captured by the crew complete the picture.

The film’s success lies in its seamless combination of the iconic and the re-discovered in a single, fluid narrative, occasionally seen on split-screens.

The only narration is from the period: viewers are guided by the voice of the late, great CBS anchorman Walter Cronkite and the radio exchanges between the astronauts and “Houston”, which have been resynchronized with the new images.

Back at the National Archives, a team of 25 is working to finish digitizing the rediscovered film reels to make them public.

Rooney says it’s likely that all the material related to Apollo 11 and in the Archives’ possession has now been found, but adds: “I can’t say for sure that they don’t exist somewhere else.” CC