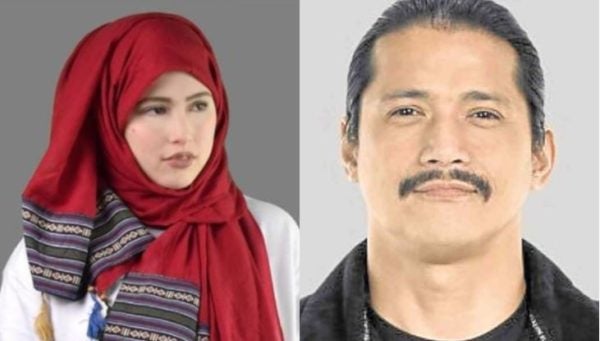 Action star Robin Padilla hailed his daughter Queenie for being chosen as a youth ambassador for goodwill by the National Commission on Muslim Filipinos. Queenie is Padilla’s eldest daughter with ex-wife Liezl Sicangco.

Padilla took to Instagram on Feb. 23 where he praised Queenie, saying the NCMF did not make a mistake on choosing her as their youth ambassador.

“You are an inspiration to them especially the young mothers,” he added.

Padilla spoke highly of Queenie, sharing he has offered her many opportunities but chose not to pursue them to take care of her daughter Mustazina. She apparently also does not want to get a nanny in raising Mustazina,

Mustazina is Padilla’s granddaughter from Queenie and her Pakistani husband Usama Rashid Mir.

Queenie flew to Marawi last January where she was able to talk to the women about their harrowing experiences during the siege.

“It’s heartbreaking, at the same time inspiring because you can feel their strength and resilience to keep moving forward,” Queenie said via Instagram on Jan. 29.

•27/01/2019• My new friends talk about what happened during the siege. It’s heartbreaking, at the same time inspiring because you can feel their strength and resilience to keep moving forward. Subhana’Allah. Thank you for sharing your stories 🙏

She was also given a plaque of appreciation by the NCMF for her “invaluable support” as youth ambassador of goodwill. She dedicated this achievement to the victims of the siege and the cathedral bombing in Jolo last January.

Thank you to Mamu Adnan and Mami Sakeenah, Director Cosanie of NCMF Bureau of Peace and Conflict Resolutions and Attorney Saidamen Pangarungan, secretary of NCMF, and UNDP, NCMF and Japan for having me become a part of this program. Alhamdullillah 🤲 this is for the people who were victimised by the siege on Marawi and the recent bombing in Julu. They deserve all the acknowledgement for having such immense fighting spirits, to survive and rise again from the rubbles and tragedies they have faced.

“This is for the people who were [victimized] by the siege on Marawi and the recent bombing in Julu,” she wrote then. “They deserve all the acknowledgement for having such immense fighting spirits, to survive and rise again from the rubbles and tragedies they have faced.” JB

Queenie Padilla to teens struggling with body image: ‘Be confident, embrace your flaws’