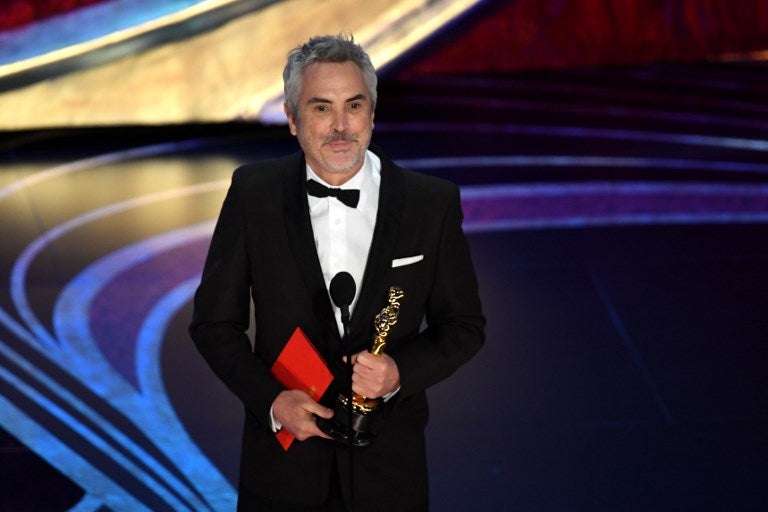 HOLLYWOOD — Mexican filmmaker Alfonso Cuaron led the charge to Oscars glory Sunday, taking two statuettes for “Roma” — his love letter to his childhood and the women who raised him — on Hollywood’s biggest night of the year.

The 57-year-old Cuaron, who already had won two Academy Awards for his space epic “Gravity,” added the prizes for best foreign film and cinematography for “Roma,” which he filmed himself.

“I grew up watching foreign language films, learning so much from them, being inspired — films like ‘Citizen Kane,’ ‘Jaws.’ And there are no waves, there’s only the ocean,” an emotional Cuaron said.

“I think the nominees tonight have proven that we are part of the same ocean.”

Rock legends Queen set the tone for a lively affair with Adam Lambert standing in as usual for beloved late frontman Freddie Mercury, bringing the audience to its feet with “We Will Rock You” and “We Are the Champions.”

The British rockers had skin in the game, with biopic “Bohemian Rhapsody” picking up statuettes for sound editing, sound mixing and film editing in the first half of the gala broadcast around the world.

“Roma,” Cuaron’s black-and-white cinematic ode to his childhood, was the front runner with 10 nominations, and is a firm favorite for the coveted best picture award to be announced at the end of the show.

It would be the first foreign-language film and the first Netflix offering to earn the honor, as well as the only movie ever to win without a reported box office figure. In keeping with the Netflix custom, “Roma” had only a limited theatrical release.

Civil rights dramedy “Green Book” overcame controversy to remain on the radar, and was rewarded with a best supporting actor trophy — Mahershala Ali’s career second — and could benefit from the Academy’s complex preferential voting system to snatch the top prize.

Hot on their heels are offbeat royal romp “The Favourite” (also with 10 nominations), Spike Lee’s race drama “BlacKkKlansman,” and crowd pleasers like superhero flick “Black Panther” — which picked up awards for its production design and costumes — and musical romance “A Star Is Born.”

“Bohemian Rhapsody” rounds out the best picture race alongside another biopic — “Vice,” about former US vice president Dick Cheney.

The 7,900-odd voting members of the Academy of Motion Picture Arts and Sciences had bold choices in front of them — traditional arthouse Oscar bait, and big, rousing blockbusters.

Their choices were announced as ever at Hollywood’s Dolby Theatre, in a ceremony beamed around the world to millions of showbiz fans, with a twist — there is no host for the first time in three decades.

The Academy opted to take the risk after comedian Kevin Hart withdrew from the gig in the face of a firestorm over past controversial tweets that were slammed as homophobic.

The first Oscar of the night — best supporting actress — went to first-time nominee Regina King, 48, for her emotional performance as a mother defending her daughter’s boyfriend, wrongfully accused of rape, in “If Beale Street Could Talk.”

“Mom, I love you so much,” she gushed, to cheers and applause. “Thank you for teaching me that God is always leaning, always has been leaning, in my direction.”

For the lead acting honors, Christian Bale’s transformation into Cheney for “Vice” gave him the early lead in the Oscars race, and several statuettes.

But Rami Malek won respect from his peers — and a Golden Globe, Bafta and a Screen Actors Guild award — for his spellbinding turn as Mercury in “Bohemian Rhapsody.”

The best actress race has a clear favorite: Glenn Close, who has swept the prizes for her gripping work in “The Wife” as a woman on the edge when her author husband wins the Nobel Prize in Literature.

“It’s very hard for me to accept the win-lose situation. I don’t think there’s any losers,” Close told reporters at Saturday’s Film Independent Spirit Awards in Santa Monica, California, where she picked up the award for best actress.

Lady Gaga wowed fans and critics with her turn in “A Star is Born,” and Yalitza Aparicio’s nomination for her first acting role in “Roma” earned praise. But it looks to be Close’s night.

“It is not her strongest role, but it is an opportunity for her to really own a small film, to carry it on her shoulders, and to remind the industry that here is one of our real treasures as an actress,” Debruge said.

The Academy — desperate to boost television ratings that have plummeted in recent years — is trying to stick to a three-hour telecast, but it hit a few bumps along the way.

Controversies over its efforts to save time included plans to present a handful of awards during commercial breaks, and to feature only a few of the nominated songs. Both ideas were quickly scrapped.

Lady Gaga and Bradley Cooper wowed the audience with their power ballad “Shallow” from “A Star Is Born.” Songstresses Jennifer Hudson and Bette Midler also performed.