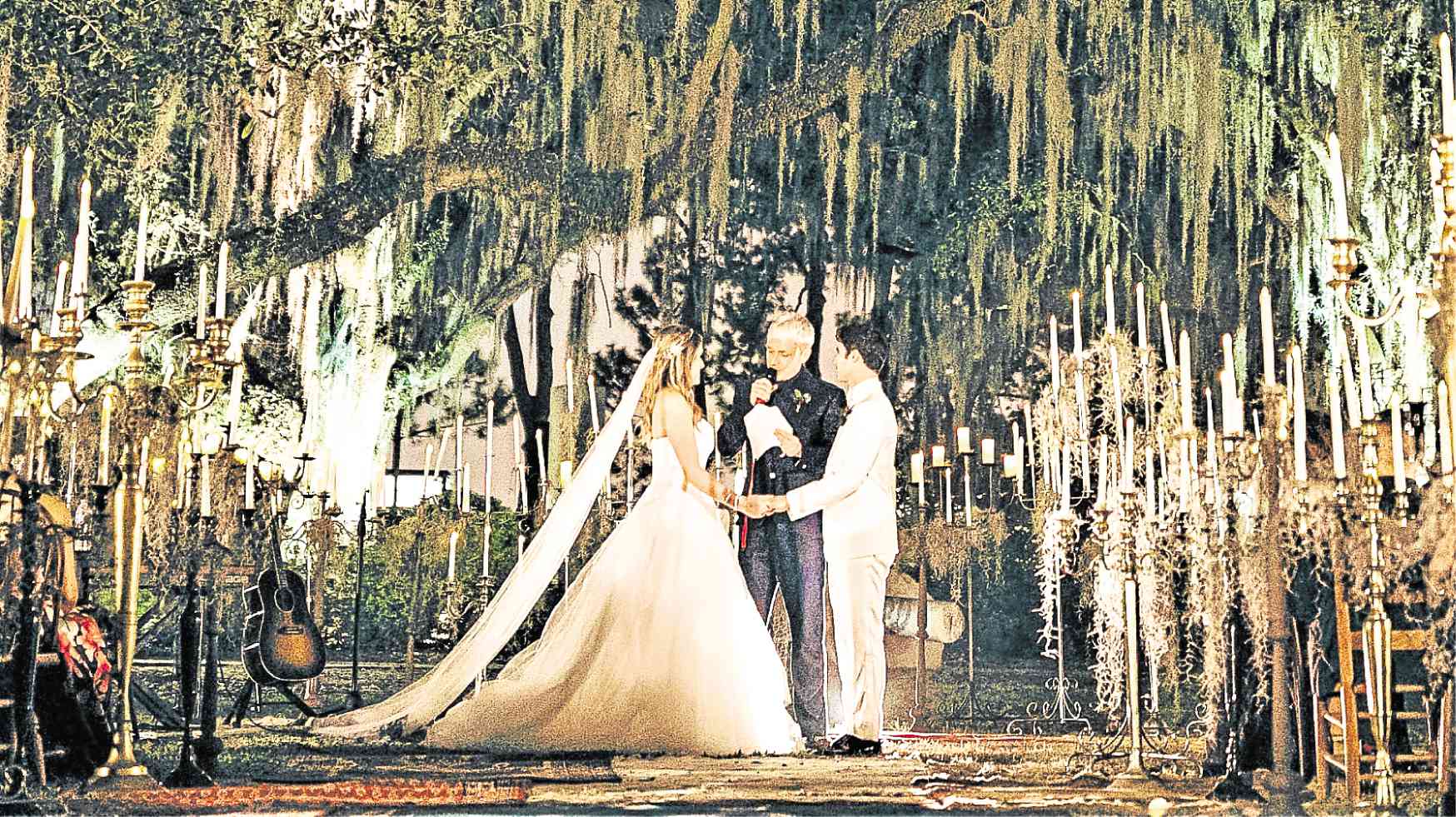 LOS ANGELES—Darren Criss wore a Giorgio Armani tuxedo when he and Mia Swier recently got married in New Orleans, but he changed into a barong Tagalog by Francis Libiran to honor his Filipino heritage during the reception.

Darren, who made history last January when he became the first Filipino-American to win a Golden Globe Award, wore the Philippines’ national garb when he danced with his Cebuana mom, Cerina Criss.

Francis’ custom-designed barong for the acclaimed star of “The Assassination of Gianni Versace: American Crime Story” featured an intricately embroidered design inspired by the tattoo patterns of Pintados, the indigenous people of Cebu. The top Filipino designer also made the pants for Darren, who swept the honors this season, including the Emmy and SAG Awards, in matching ivory white, for his portrayal of Andrew Cunanan.

In the live concert portion of the reception, Darren rocked in the shirt made of pure piña (pineapple) fabric delicately hand-loomed in Cebu. He and Mia, who changed from her Vera Wang (who was around to help Mia get ready on the morning of the big day) wedding gown into a mini dress (also by Vera), sang to the delight of the guests. 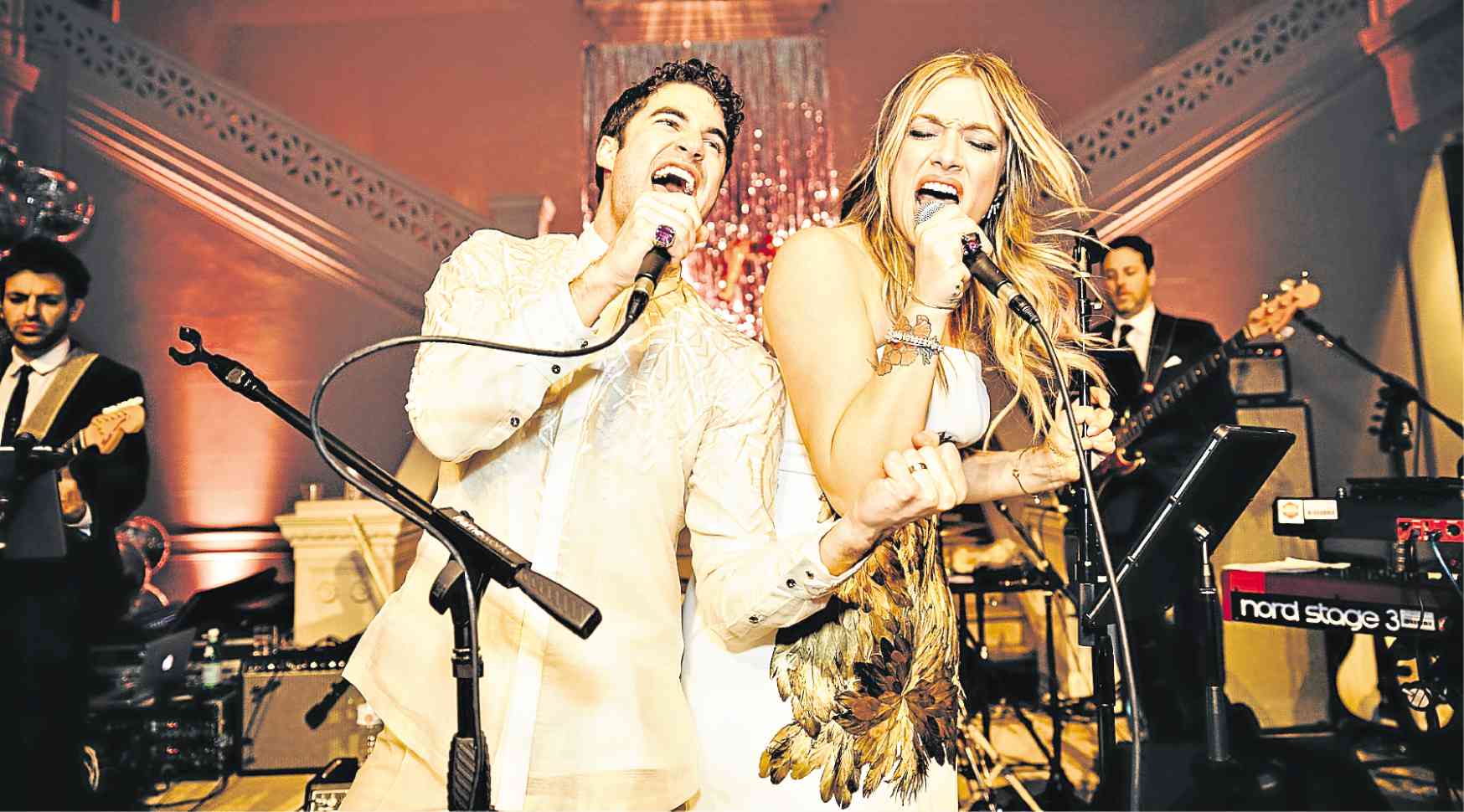 Criss (left), in a barong by Francis Libiran to honor his Filipino heritage, and Swier performed as newlyweds. —KATIE EDWARDS

The lovely bride—a producer-director-musician—and groom played the bass and guitar, respectively, at one point in the reception, according to Vogue magazine.

Vogue reported that Darren’s “Glee” costars, Lea Michele (Rachel Berry) and John Stamos (Dr. Carl Howell), also performed during the joyful reception inside the Museum of Art in New Orleans, where Mia is from.

On how he got to collaborate with Darren on the barong, Francis said in our e-mail interview, “It was last January when my business partner Arsi Baltazar received a message from the stylist of Darren in LA asking him if we can create our version of the barong Tagalog for Darren’s wedding. 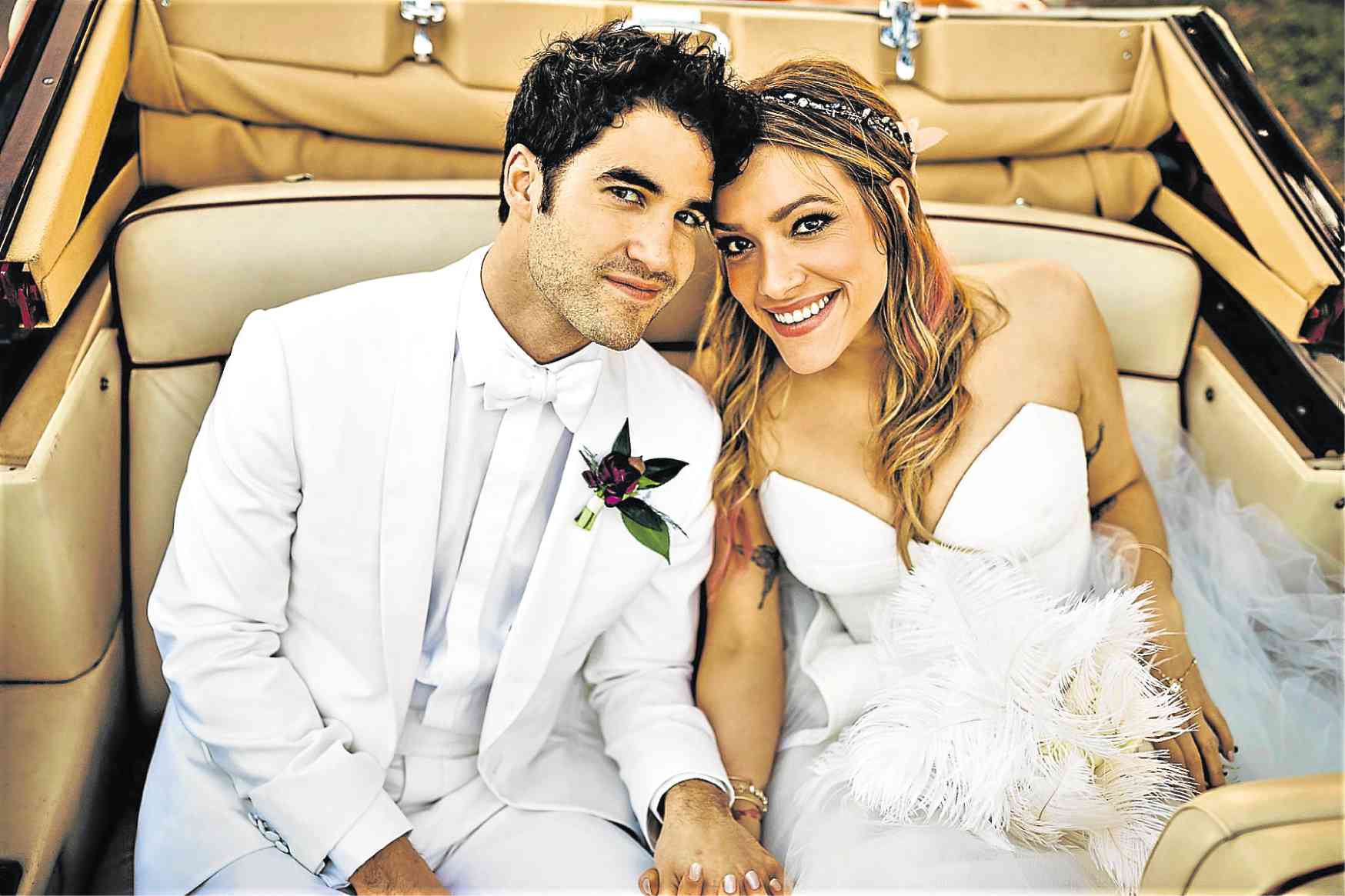 “It was a very confidential matter, but we were over the moon when we were tapped by Darren and his stylist, especially since we had the privilege of meeting the actor and celebrating with him at the Golden Globe Awards last January. We sent several design sketches, and Darren chose two. We made the two barongs and sent them.

“During the fitting last Feb. 5, he loved the two barongs, but could not decide which one he was going to wear. He said he would choose on his wedding day.” 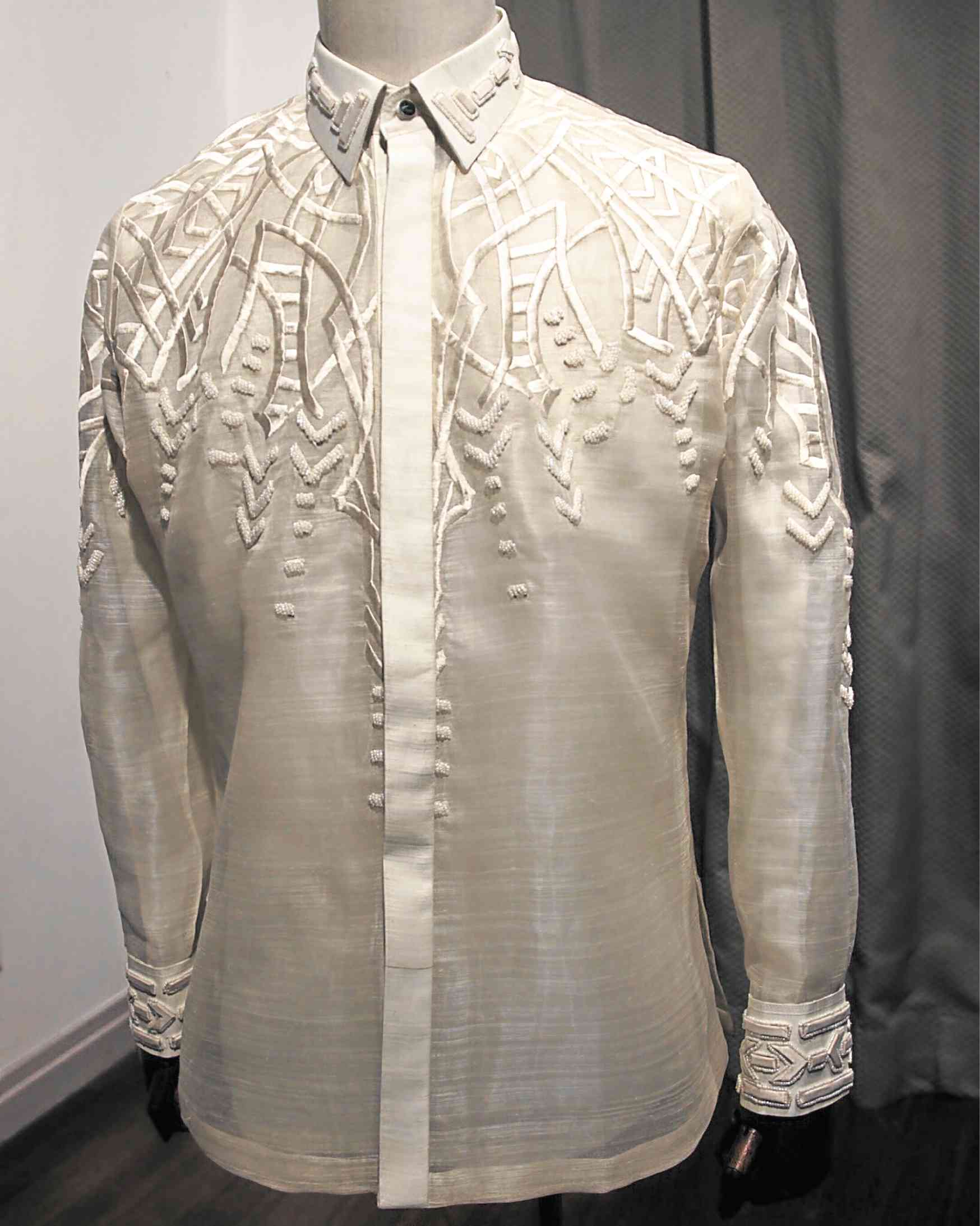 Left photo shows one of two barongs made for him by Libiran.

Francis shared his inspiration ideas for the barong that earned praise and curiosity among the guests at the reception. “Darren and his stylist simply wanted us to create our own modern version of the barong which has always been a part of my staple collection. I thought that it would be really nice for Darren to wear a button-down barong embroidered with Art Deco-patterned threadwork—my signature design.” 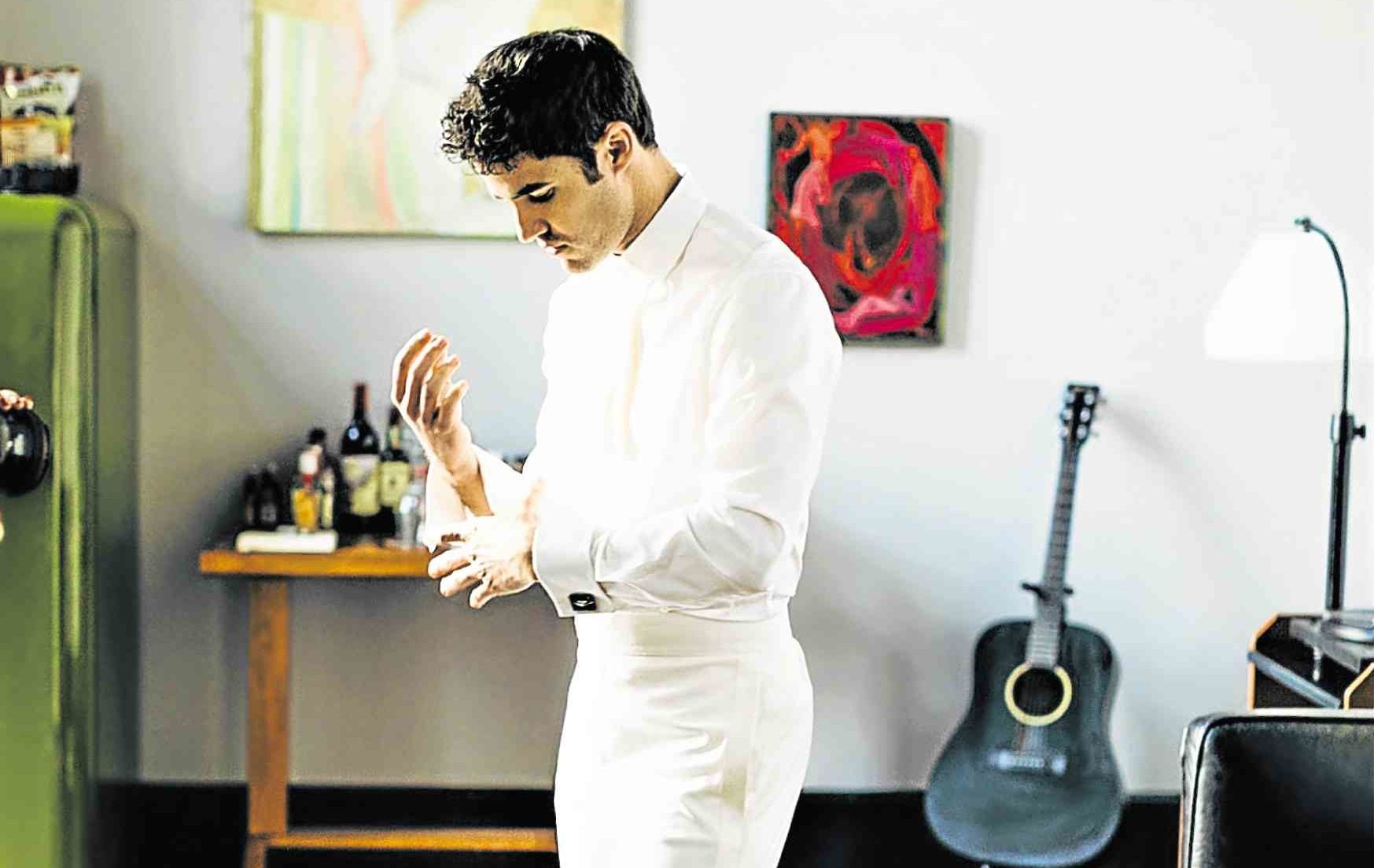 Criss changed from his Giorgio Armani tux into a barong for the live concert part of the reception. —KATIE EDWARDS

The designer shared, “It is my great honor to be part of this momentous event in Darren’s life. [It’s]  more special … that he paid homage to his Filipino roots by choosing to wear the barong Tagalog. Seeing him wear our national dress, which we custom-designed, makes me extremely proud to be Filipino!”