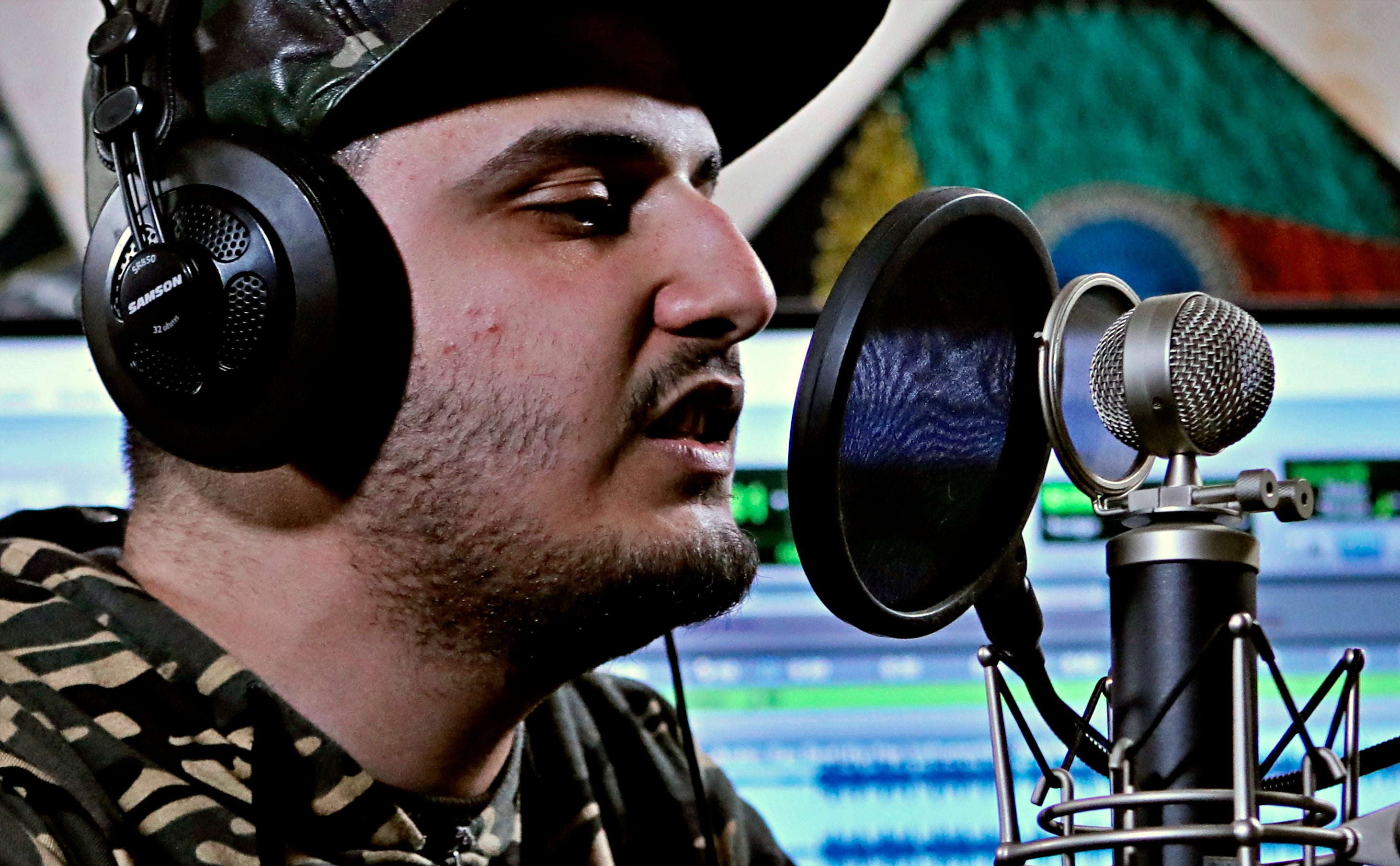 In this Tuesday, Feb. 12, 2019 photo, rapper Ahmed Chayeb, better known by his stage name Mr. Guti, records on his computer, at his home in the southern port city of Bqasra, Iraq. Chayeb raps about anger and disillusionment in his hometown of Basra, which saw riots last summer over failing services and soaring unemployment. Chayeb says his generation is fed up with the false piety of politicians and religious authorities who preach about faith and duty but have left Basra to fall apart. (AP Photo/Nabil al-Jurani)

BASRA, Iraq — A youth-led protest movement in the southern Iraqi port city of Basra, which saw riots last summer over failing services and soaring unemployment, has found an artistic outlet in the words and beats of homegrown rapper Ahmed Chayeb.

The 22-year-old rapper, also known as Mr. Guti, said his generation is fed up with the false piety of politicians and religious authorities who preach about faith and duty but have let Basra fall apart.

“We need to be critical of everything that’s not right,” Chayeb told The Associated Press in a recent interview in his home studio, where he recorded “This is Basra,” lashing out at the powerful Shiite religious establishment.

Mr. Guti’s expertly produced music videos have drawn tens of thousands of YouTube viewers but his new-found fame has also brought danger: threats from hard-liners are common and two of the city’s protest organizers have been killed in recent attacks. Their killers remain at large.

Basra, long known around the Persian Gulf for its drinking establishments and its maritime vibe, fell under conservative rule after Shiite clerics and militias took over the city in the vacuum caused by the 2003 U.S.-led invasion of Iraq.

Once renowned for its canals and markets, Basra’s waterways today are clogged with waste, and its drinking water is filthy. The city erupted in violent unrest last summer that led to demonstrators burning down government and party-affiliated buildings.

Amid the revolt, rap offered Basra’s youth — tired of joblessness and failed services — an opportunity for lyrics blistering with criticism.

In “This is Basra,” Chayeb raps against the backdrop of a march around the city’s burning municipal building during last summer’s protests, asking why his generation has been called on to fight a war for leaders who cannot secure water for the city.

The conflict he refers to is the four-year war against the Islamic State group that the U.S.-backed Iraqi government forces ultimately won. Many young Shiites followed a call in June 2014 by Iraq’s top Shiite cleric, Grand Ayatollah Ali al-Sistani, for volunteers to fight against IS. Thousands died in that fight.

“We were martyred for this war, I fell, and the authority has forgotten my loyalty,” his rap song lyrics say.

“You’re not associated with Hussein,” Mr. Guti goes on, invoking the revered Shiite imam and grandson of the Prophet Muhammad who died in the 7th century Battle of Karbala, and whose example Iraq’s leaders have asked their youth to follow.

Chayeb, mindful of the dangers, has been circumspect about where and when he performs. He said most of his concerts are arranged through private contacts; he stopped recording at a professional studio in 2016. He said he’s received death threats that have grown more intimidating in recent months.

But he won’t stop rapping.

“If we stay afraid, nothing will change,” he said.

As a teenager, Chayeb watched U.S. and British rappers on YouTube, then got together with friends to perform his own rhymes. He also followed a string of Arab rappers and sees Klash, from the Saudi city of Jiddah, as one of his greatest influences.

“My aim is to explain what is happening to Basra because of the people who are corrupt,” he said, adding that rap is a way “to release my pain.”

Corrupt politicians and clerics should watch out, he said.

“Beware of Basra,” he rapped. “We won’t be quiet until our demands are met.” /kga

Read Next
Lauren Young defends statement on Elmo-Janella abuse allegations
EDITORS' PICK
Seventh judge assigned to handle De Lima case
Beyond water service: Maynilad builds massive infrastructure projects to clean up Metro Manila waterways
PH preps for China virus: Question of when, not if
Museums ‘put to sleep,’ churches closed amid volcano’s unrest
Get exciting deals and discounts when you download the new McDonald’s App
SM continues to send relief assistance to remote towns in Batangas
MOST READ
Taal Volcano flexes signs of restiveness anew
Part of Aurora Boulevard in Cubao closed from Jan. 25 – Feb. 1
Passengers from Wuhan, China to be flown out of Kalibo, Aklan – CAAP
Lacson on Duterte’s threat to end VFA over Bato’s canceled visa: Where is the connection?
Don't miss out on the latest news and information.

Passengers from Wuhan, China to be flown out of Kalibo, Aklan – CAAP