PDI in backstage with Oscar winners 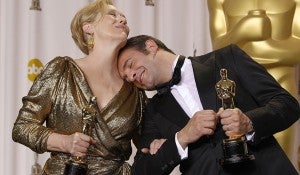 WHAT A FEELING Meryl Streep, the best actress for “The Iron Lady,” and French actor Jean Dujardin, the best actor for “The Artist,” pose backstage at Sunday’s 84th Academy Awards in Hollywood, California. AP

LOS ANGELES—Backstage at the Academy Awards on Sunday evening (Monday morning in Manila), the winners were more composed but still giddy. Most of them were open and candid, encouraged no doubt by their triumph.

“Oh, I was thrilled,” said Meryl Streep, the best actress for her role as former British prime minister Margaret Thatcher in “The Iron Lady.” When we saw her earlier on the red carpet, we thought she was dressed to win the gleaming Oscar statuette, decked in gold as she was from head to toe.

“I thought I was so old and jaded, but they call your name, and you just go into sort of a, I don’t know, a white light,” said the most nominated thespian in the Academy’s history.

“It was like I was a kid again. I was a kid when I won this, like, 30 years ago. Two of [my] daughters were not even conceived. So it was great. And it was doubly wonderful because my long time collaborative colleague, Roy Helland, make-up man, hairdresser, won (for best makeup) too, and he won with his colleague Mark Coulier, a great British prosthetics designer.”

Meryl added: “Frankly, I understand ‘Streep fatigue.’ So, I was really, really happy but I don’t take anything for granted, that’s for sure.”

Probably because she had lovingly thanked her husband Don Gummer in her acceptance remarks, Meryl was asked how she has managed to keep her marriage strong.

“You can ask every working woman that question and get a million different answers,” she replied.

“But because [my work is] in the arts, I don’t have to work every day. So my [schedule] has always been more flexible than those of other working women. Even when I was young and broke, I was only working four months at a time. [But] my children never knew when I was going to be home, so [time] was very valuable. The more flexible work is, the more engaged the dads become, the better.”

Best actor Jean Dujardin was asked about the French equivalent of the “F” word in his ebullient acceptance remarks.

He laughed and said: “It’s amazing. It’s incredible. It’s unbelievable. Thank you.” And then, flashing the silent film-actor smile he displayed in “The Artist,” he said, “Ah, yes. I’m sorry.”

“I’m just going to live in this moment,” said Octavia Spencer about her immediate plans after being named best supporting actress for “The Help.”

But, she continued, “Tonight I am going to find my cast mates. I’m actually going to have a quarter of a glass of champagne and hang out.”

Octavia credited the ensemble in “The Help” for the film’s critical and commercial success. “It’s very rare, that… type of ensemble that we had,” she said.

On her triumphant awards season which saw her sweep virtually all the best supporting actress honors from various groups, Octavia said: “Well, I just want to say ‘fan-effing-tastic.’ But we’ll just leave the effing out. Fantastic. I’m a benefactor of all [the experiences of] real-life Minnys, Aibileens, Constantines, Skeeters, Celias (the characters in ‘The Help’). I’m very humbled because I get to accept this award and I haven’t really done anything.”

After the Oscar win, Octavia has one other “wild” dream: “I want to be a producer. I want to be an activist. I want to be proactive in bringing about work for men, women, boys, girls, everybody who is good at what he does and deserves a shot at it. I want to have a presence both behind the scenes and in front of the camera. I’ll be a jack-of-all-trades and hopefully decent at one of them.”

Christopher Plummer, 82, did not make a big deal out of the fact that he just became the oldest-ever Oscar winner. “I don’t believe that for a second,” he said, smiling. “I think Charlie Chaplin was, even though it was an honorary Oscar. Wasn’t he 83 [when he was given the honorary Oscar]? But this feels pretty good anyway.”

Asked to elaborate on the loving tribute to his wife that he delivered onstage as he accepted the best supporting actor prize for “Beginners,” the actor—whom many remember as the patriarch in “The Sound of Music”—replied: “I thought it was abundantly clear. Of course, I’m a naughty boy. I’ve been bad all my life, and she always puts me in line. I think it’s extraordinary, what she’s done. Didn’t it strike you when you heard the phrase, ‘She rescues me every day of my life?’ What could be clearer?”

Plummer, who plays a widower who comes out of the closet late in life, said of actors playing gay roles: “I think of actors as being universally the same, gay or straight. We’re all actors, and a gay actor can play a straight guy beautifully and vice versa. It’s wonderful, because it cancels out all of the sexual differences and all the sort of preconceived misunderstandings of a sexual existence.”

This Oscar win is Christopher’s first in a stellar career, and he said it was sort of a renewal: “It has recharged me; I hope I can do this for another 10 years at least. I’m going to drop dead wherever I am, on stage or on the set. We don’t retire in our profession, thank God.”

Michel Hazanavicius, the best director for “The Artist,” the silent, black and white ode to early cinema, also adjudged best picture, explained why he thanked director Billy Wilder three times in his acceptance speech: “I thanked Billy Wilder three times, because I had to make it short. I could thank him a thousand times, because I think he was the perfect director. He was the soul of Hollywood, and… I love him.”

The best-applauded winner backstage was Meryl, who fielded all the questions tossed her way—including pointing out that the gold shoes she wore were by a label favored by Margaret Thatcher.

But she had to leave quickly for the traditional Governor’s Ball (after party). She explained, in best actress mode, “I am so thirsty!”

Asked if she planned to celebrate by drinking whiskey, reportedly the former British prime minister’s favorite, Meryl quipped: “I am going to start with a couple of glasses. And then we’ll see if I can walk on the Ferragamos.”