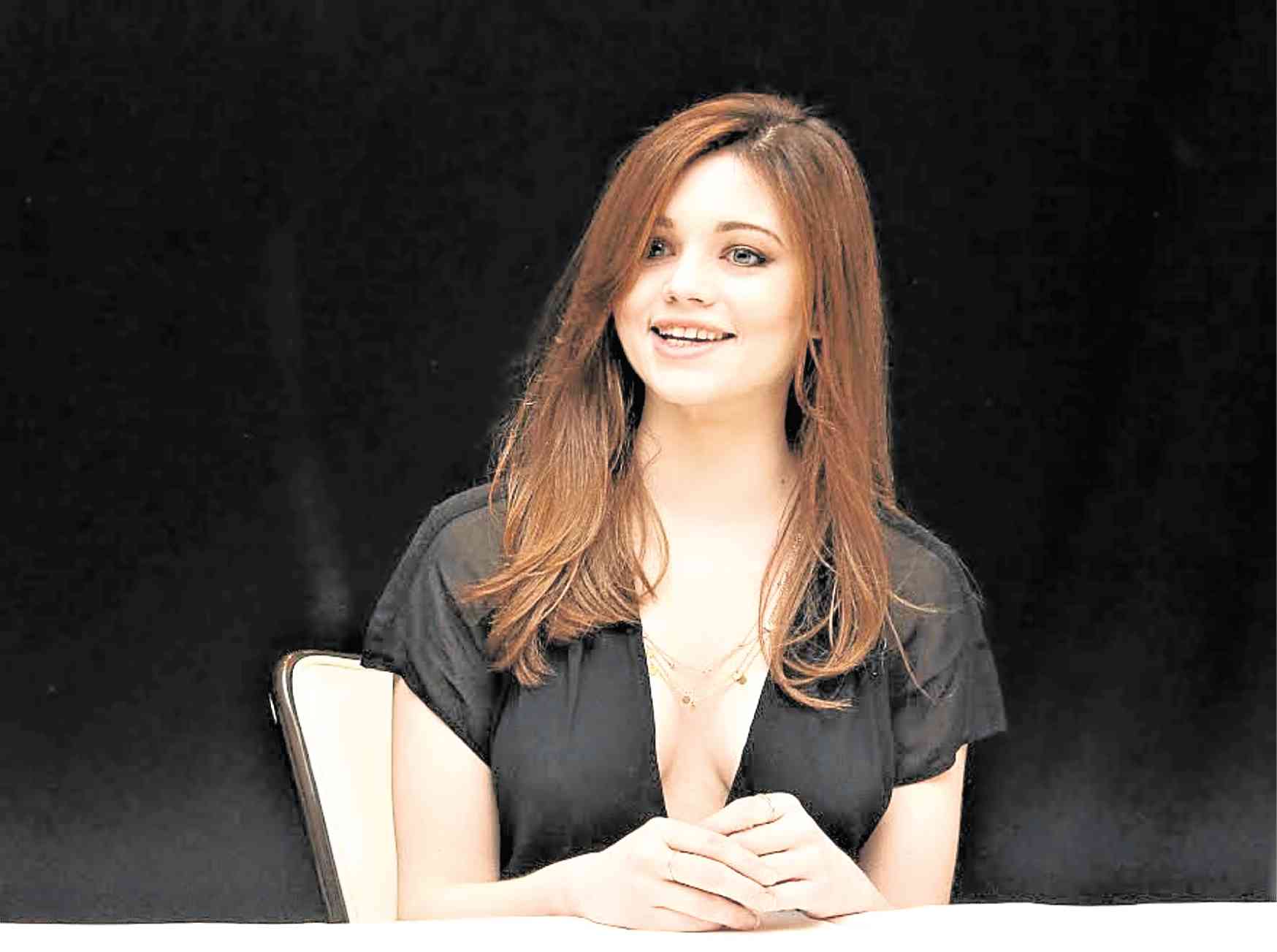 LOS ANGELES—Remember Olivia Hussey who, at 15, first captivated the world when she starred in Franco Zeffirelli’s “Romeo and Juliet”? Olivia, now 67, has a daughter, India Eisley, 25, who is poised to also make her mark as an actress.

“I was born in LA,” said India in our recent chat in LA. Long-tressed like her mom was when she costarred with Leonard Whiting in Zeffirelli’s 1968 retelling of Shakespeare’s classic, India wore a Reformation dress, Christian Louboutin shoes and vintage jewelry.

“But I was raised all over the place because my mom is an actress,” added India, who stars opposite Chris Pine in TNT’s riveting miniseries directed by “Wonder Woman’s” Patty Jenkins. “So I was raised in London, LA, or depending on where she was working. It sounds pretentious, but I grew up on sets, so that inspired me to go into this profession, really.”

In “I Am the Night,” India plays Fauna Hodel, upon whose book, “One Day She’ll Darken: The Mysterious Beginnings of Fauna Hodel,” the six-episode series is based on. The true story makes for a fascinating retro noir thriller that explores racial identity and uncovers new details of the unsolved Black Dahlia murder in Hollywood.

Fauna’s grandfather, George Hodel (played by Jefferson Mays), is suspected to be the killer behind the Black Dahlia case and other murders. The sordid tale even has a Philippine connection. Screen Rant’s John Orquiola wrote: “After George Hodel died in 1999, his son Steve, a former LA homicide detective, investigated his father’s sordid life and concluded that George was the Black Dahlia killer. Steve also believed his father was a serial killer responsible for other murders; Steve suspected George of being the Chicago ‘Lipstick Killer’ of the late 1940s, the 1967 ‘Jigsaw Murderer’ in Manila, Philippines, and even the San Francisco ‘Zodiac Killer’ in the late-1960s.”

Being an actress yourself, were you intimidated by your mom’s fame? I was never intimidated by her. I’ve always been quite proud. At a young age, I was always aware that she had an impact on people, and that she was well-known, mostly from being with her when she was working.

Speaking of your mom having an impact on people, I had a crush on your mom after watching her in “Romeo and Juliet.” I don’t think you’re alone.

When did you first watch your mom in “Romeo and Juliet”? Oh wow, the first time I was exposed to it, I was really young, so I wasn’t consciously watching it. The first time that I really paid attention to it was when I was around 7 or 8. At first, I said, “Oh look, it’s Mommy!”

How many times have you seen “Romeo and Juliet”? Many, many times (laughs).

What do you think of it? Oh, it was brilliant. It was Franco Zeffirelli at his best. He was an absolute perfectionist. And it’s interesting watching something that’s a revered classic, because we used to go to Franco’s villa. I used to just hang out with him. And so, to have that kind of muffled divide between the two, is interesting.

But it makes you respect the business you’re in even more, because you’re aware of how temperamental and creative people can be. It was a beautiful film. It still holds up. It’s timeless and very rare.

Were you drawn to acting even when you were a kid? Yeah, I used to lock myself in my room and memorize scenes from films and reenact them when I was alone. One of which was the overdose scene in “Pulp Fiction” (laughs). I was 7, and I’d say, “If I tilt my head this way and it comes out of my mouth that way, it’s so much more effective.” Then my mum was like, “Dinner’s ready!” I’d say, “Just a minute, mom, I’m playing” (laughs).

But as far as a singular moment, I remember seeing Sally Field in “Sybil.” I’d seen it before, but when I was around 12, it really hit me, and I was like, that’s what I want to do. That spark really kicked in.

What did your mother tell you when you decided to become an actress? It was not like a set day where I was like, “I’m becoming an actress.” It just happened. And if ever I was having a bad day because an audition didn’t go well or something, my mom was subtle with that kind of thing. Her biggest advice was to just have a good sense of self because in this business, things move very fast. If you don’t look after yourself, no one else will.

She also advised me to just be realistic about it and to be sure that I was going into it for the right reasons. Which she already knew because, when I was little, playtime for me was watching movies, as sad as that sounds (laughs). She also made me aware that it’s a lot of hard work, and to love what you do so that at the end of the day, the pros outweigh the cons.

Didn’t you play Juliet in “Social Suicide,” which is said to be a modern-day version of “Romeo and Juliet”? Oh, no, that (laughs)? That wasn’t even a proper film. It was a favor to someone. I didn’t think anyone saw that (laughs). My character’s name was Julia. I did have a stabbing scene, yeah.

Did you inherit your father’s musical talents? I’m not tone-deaf, so that’s something (laughs). I can futz around on piano. I can sing if I have to. 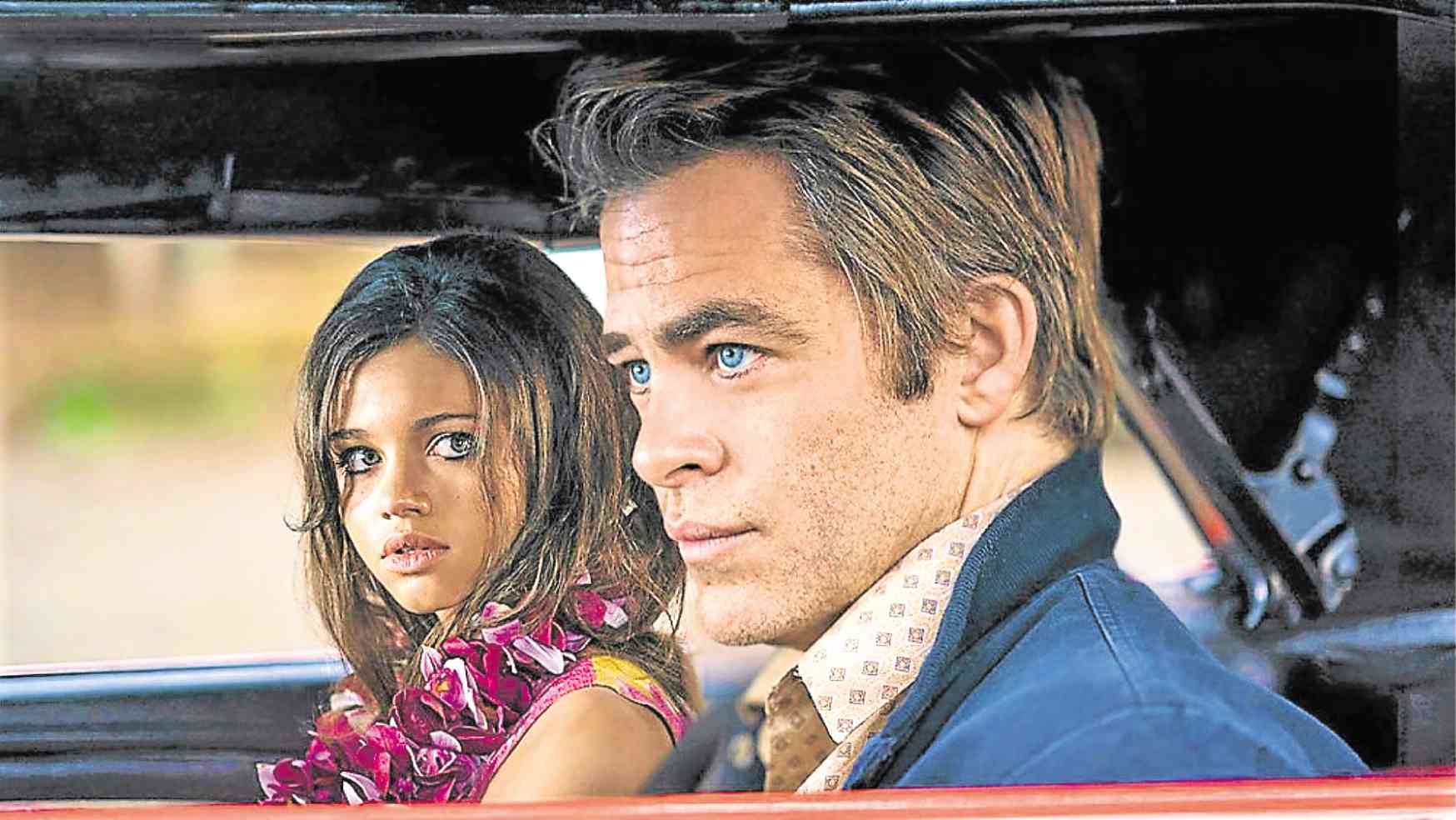 India Eisley stars with Chris Pine in the TV miniseries, “I Am the Night.” —TNT

Have you sung in film or television? Not yet. I haven’t walked that plank yet.

If somebody offers you a musical role, would you jump at the chance? Oh, yeah. I’d give it a go. I mean, within reason (laughs). With ample prep time.

Did your mother choose your name because of her interest in Indian philosophy and culture? Yeah, because she had a meditation teacher, who was Indian. He was the one who married Akira and my mom. His name was Muktananda. My mom’s always had a connection to the whole country. She spent a lot of time there. Twenty years before I was a born, she was like, “I’m going to have a daughter, and her name is going to be India.”

Have you met Akira? I have not. Every two years, Max would go to Japan because of his family. He’d spend a few months there.

It seems your mother likes musicians. She does. She has a type (laughs).

Talk some more about your dad, David Glen Eisley. He’s an all-around singer. He did a lot of solo work, but he was in a band in the ’80s. He hates when I call it this, but it was like a hair band (laughs). It’s called Giuffria. So yeah, my father is a singer predominantly, but he started out as a drummer.

He was dating the wrong girl. Wow, I would tend to agree with you. But, yeah.

How were you raised by your parents? I was raised in a very lenient household. I didn’t know what “being grounded” meant until I was 15 and my friends told me, “Oh, you’re going to be so grounded.” I was like, “Oh, thank you. That’s a good thing, isn’t it (laughs)?”

My mom was very adamant, especially in the work setting, that my brothers—I have two older half-brothers, same mother, but different dads—and I treated everyone equally. It was all about basic decency.

How did you land this breakthrough role? This project came about as any other audition. I didn’t think I was going to book it at all, as I do with almost every job that I end up booking.

I was aware of the Black Dahlia, but I was not aware of Fauna Hodel’s story. I immediately went out, bought her autobiography and read it from cover to cover. I was completely stunned. I had to do it.

This is a very emotional role. How did you prepare for it? Even more so because, unfortunately, Fauna Hodel, who I played, passed away a few weeks before I was cast. Her daughters, even though the grieving process never ends, were there on set throughout filming, and it was wonderful. As far as preparation, what I wanted to do, more than anything, was to know where she was at emotionally. So, I read her autobiography and learned what her mental state was when she was that age.

When you read the book, what surprised you most about Fauna Hodel? Just on a human level, the amount of resilience and strength Fauna had to have in the circumstances that she was born into, and the unfolding circumstances as she learned more about her life as she went on, is staggering. To be 16 and have that kind of revelation.

And also, Fauna had a child when she was a teenager.

How was your first impression of Patty Jenkins different from your opinion of her when you actually began working together? Not that much difference. What you see is what you get. She’s straightforward, but she has a warmth to her that’s very rare.

Many teenagers who are now in their 20s grew up with you because they watched you in “The Secret Life of the American Teenager.” What did this series mean to you? That show wasn’t something that I initially [thought of], because I was watching things like “Deliverance,” “Pulp Fiction” and “Sybil,” instead. I was watching really dark things at the time. When the audition came to play the 13-year-old sister, I thought, I want to play the crack addict! And they said, “India, there’s no call for a preteen meth head.”

I am grateful for that show being my first big job, my foot in the door.

Your performance in “I Am the Night” is a career breakthrough. Do you feel a momentum? I don’t know, really (laughs). It’s all happening quite quickly. I’m enjoying it and if offers come in, I’ll be thrilled. I love to work.

Do you have anything lined up? Not at the moment. I’m reading scripts.