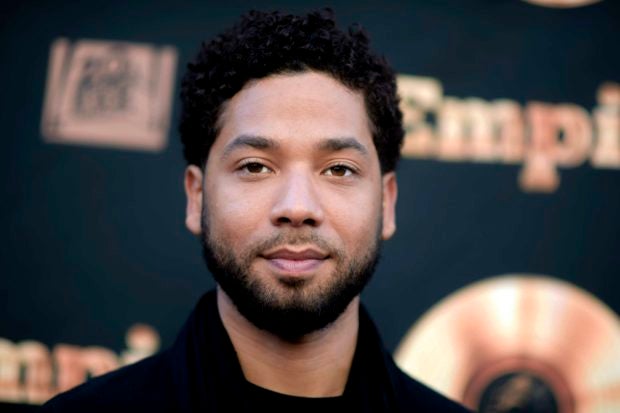 In this May 20, 2016 file photo, actor and singer Jussie Smollett attends the “Empire” FYC Event in Los Angeles. Chicago police say they’re interviewing two “persons of interest” who surveillance photos show were in the downtown area where Smollett says he was attacked last month. A police spokesman said Thursday the two men aren’t considered suspects but may have been in the area at the time Smollett says he was attacked. Smollett says two masked men shouted racial and homophobic slurs before beating him and putting a rope around his neck on Jan. 29. Image: Invision/Richard Shotwell via AP

Chicago police said Thursday night that local media reports that the attack against “Empire” actor Jussie Smollett was a hoax are unconfirmed.

The reports surfaced as detectives were questioning two “persons of interest” who were captured on surveillance cameras in the area of downtown Chicago where Smollett said he was attacked last month.

The two men aren’t considered suspects but may have been in the area when Smollett says he was attacked, police spokesman Anthony Guglielmi said earlier Thursday. Smollett said two masked men shouted racial and homophobic slurs before attacking him and putting a rope around his neck early on Jan. 29.

Guglielmi said Thursday night that Police Superintendent Eddie Johnson contacted at least one Chicago news outlet to say investigators have no evidence to support their reporting. The spokesman added that Johnson said the “supposed CPD sources are uninformed and inaccurate.”

Producers of the television drama also disputed media reports that Smollett’s character, Jamal Lyon, was being written off the show, calling the idea “patently ridiculous.”

“(Smollett) remains a core player on this very successful series and we continue to stand behind him,” 20th Century Fox Television and Fox Entertainment said in a statement late Thursday.

Smollett, who is black and openly gay, told ABC News in an interview that aired Thursday morning that he believes the people of interest were the ones who attacked him.

“I don’t have any doubt in my mind that that’s them,” he told the network. “Never did.”

No arrests have been made in the case. Police said they have not found surveillance video that shows the attack, but that the investigation is ongoing.

Smollett also told Robin Roberts of ABC News that people who question his narrative of the attack were “ridiculous” to think he would lie. Smollett has said he was attacked while out getting food at a Subway restaurant.

“I’ve heard that it was a date gone bad, which I also resent that narrative,” he said. “I’m not gonna go out and get a tuna sandwich and a salad to meet somebody. That’s ridiculous. And it’s offensive.”

“I didn’t need to add anything like that,” he said. “I don’t need some MAGA hat as the cherry on top of some racist sundae.”

He also said he didn’t initially want to give police his cellphone because the device contained private content and phone numbers.