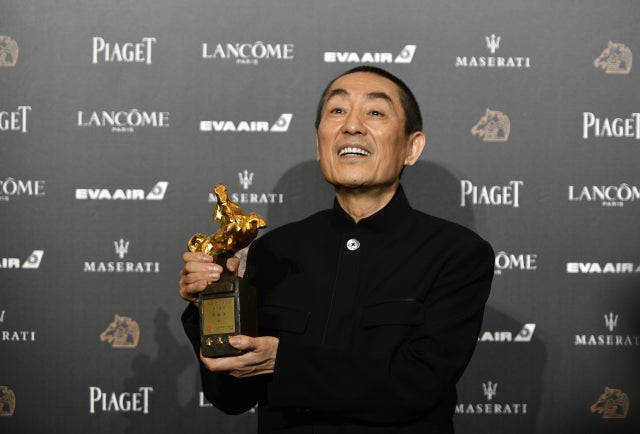 Chinese director Zhang Yimou, the maker of such classics as ‘Raise the Red Lantern’ and ‘House of Flying Daggers,’ is one of China’s best-known directors abroad and a frequent guest at prominent European film festivals. Image: Sam Yeh/AFP

The Berlin Film Festival said Monday that a new movie by acclaimed Chinese director Zhang Yimou had been pulled from the competition days before its scheduled world premiere.

The highly unusual move, which comes amid a Beijing crackdown on the domestic entertainment industry, was announced in a festival statement citing “technical difficulties encountered during post-production.”

Zhang’s “Yi Miao Zhong” (One Second) had been scheduled to screen on Friday. It is billed as an intimate portrait of a prisoner who escaped from a labor camp during the Cultural Revolution and is on a trek to see a key newsreel in a rural village cinema.

The film’s press material noted that Zhang himself “was sent to the country as a young man during the Cultural Revolution, an experience he has explored in many of his films.”

“In ‘Yi Miao Zhong’, the filmmaker pays homage to his medium and celebrates the cinema as a communal experience which goes beyond the film itself,” it said.

The Berlinale Festival, one of Europe’s top cinema showcases, said it would show an earlier Zhang work instead and that the competition for the Golden Bear top prize would now only feature 16 titles.

A jury led by French Oscar winner Juliette Binoche is to pick the winner on Saturday. Two other Chinese directors, Wang Quan’an and Wang Xiaoshuai, are still in the running.

It was described as a story about a disaffected youth and was to premiere in the Generation sidebar section.

Zhang, the maker of such classics as “Raise the Red Lantern” and “House of Flying Daggers”, is one of China’s best-known directors abroad and a frequent guest at prominent European film festivals.

He won the Golden Bear in 1987 with the drama “Hong gaoliang” (Red Sorghum) starring Gong Li.

In 2009, he presented “A Woman, A Gun, A Noodle Shop,” a remake of the Coen Brothers’ “Blood Simple,” at the event. Two years later he screened “The Flowers of War” featuring Christian Bale.

The entertainment sector had blossomed in recent years, with official encouragement by a government keen to replace foreign content with homegrown fare and develop the industry as a global “soft power” asset.

But a nationwide push for more material approved by the Communist party across media, music and entertainment has had a chilling effect on some artists. MKH