Resistance is key as ‘Handmaid’s Tale’ returns for season 3 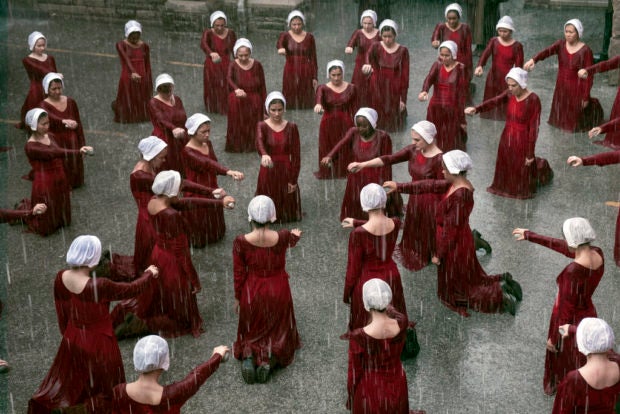 This image released by Hulu shows a scene from the series, “The Handmaid’s Tale,” returning for a third season on June 5. Image: George Kraychyk/Hulu via AP

PASADENA, California — Resistance is the theme when “The Handmaid’s Tale” returns this summer with 13 episodes for its third season, but the Hulu drama is avoiding a collision with the final season of HBO’s “Game of Thrones.”

The return date contrasts with the previous seasons’ April debuts and puts the drama outside the eligibility window for this year’s Emmy Awards. It also keeps “The Handmaid’s Tale” out of the path of juggernaut “Game of Thrones,” which starts April 14.

“We simply wanted to give the show as much time as possible to maintain the quality it has,” Erwich said. As for the Emmys, he said, TV academy voters will be able to consider the series as a whole when it competes.

The Hulu drama collected six Emmys for its first season, including best drama and best lead actress for Elisabeth Moss, who stars as June. Although it earned three awards in 2018, including for Samira Wiley, it lost the top trophy to “Game of Thrones,” while Claire Foy of “The Crown” won the top drama acting trophy.

The new season of “The Handmaid’s Tale” will focus on June’s struggle against the repressive regime of Gilead, Hulu said in a release.

Other characters will be forced to take a stand as well, with “blessed be the fight” the guiding prayer for rebels. Hulu also promised “startling reunions” and betrayals in the upcoming season.

‘The Handmaid’s Tale’ back for ‘gut-wrenching’ second run