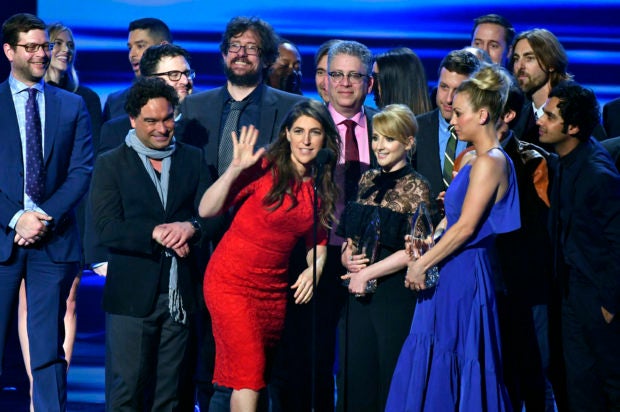 n this Jan. 18, 2017 file photo, the cast and crew of “The Big Bang Theory” accept the award for favorite network TV comedy at the People’s Choice Awards at the Microsoft Theater in Los Angeles. Champagne is briefly replacing scripts on the set of “The Big Bang Theory.” A nondescript building on the sprawling Warner Brothers production lot in Burbank known as Stage 25 was renamed Thursday, Feb. 7, 2019, for the CBS sitcom that called it home for 12 years and will soon depart. Image: Invision/Vince Bucci via AP

Champagne briefly replaced scripts Thursday for a ceremony renaming the nondescript Stage 25 on the sprawling Warner Bros. production lot after the sitcom “The Big Bang Theory.”

Still television’s most popular comedy, the show will exit the airwaves and the studio it has called home for 12 years this spring.

Actors Jim Parsons, Johnny Galecki, Kaley Cuoco, Mayim Bialik and the rest of the comic ensemble ran through lines for an episode that will air in early March before studio brass joined them to unveil a plaque.

“We’re going to be miserable when this is over,” series creator Chuck Lorre told the cast and assembled crew. “I’m so sad.”

Lorre said it wasn’t his call to end the series, but now that it’s been made the time feels right.

The cast rehearsed an episode that hints at some upcoming transitions with barely a flub. It’s not an unfamiliar ritual: they will have made 279 episodes by the time it all ends in May. The episode they rehearsed will be filmed before a live audience later this week.

Only four other studios at Warner Bros. have a similar plaque for the series that filmed there, with others named for “Two and a Half Men,” ”ER,” ”Friends” and “Ellen.”

Given that he was also behind “Two and a Half Men,” it’s the second such honor that Lorre is responsible for. One of the most successful comedy producers of all time, Lorre also produces “Mom” and “Young Sheldon” for CBS.

While broad, mainstream fare is his forte, Lorre just won a Golden Globe when his Netflix series “The Kominsky Method,” which stars Michael Douglas and Alan Arkin, was named best comedy.

Despite success in what is seen as the hipper streaming service, Lorre said in an interview he has no interest in turning his back on broadcast television, the medium that earned him a fortune.

“It’s so rewarding to put a show up in front of a live audience,” he said. “It’s exciting, it’s nerve-wracking, it’s heart-breaking. The audience doesn’t always respond the way you want them to and you’re trying to make it work. But it’s really a tiny bit of theatre, and that I love. I don’t want to let it go.”

The “Big Bang” exit marks another transition phase for television, with ABC announcing earlier this week that its five-time Emmy winner, “Modern Family,” will call it quits next year.

That will leave a void in the format of broadly-popular comedies. Lorre suggested that’s only part of television’s natural cycles.

“How many times over the years have we heard that this is over, and then a good show comes along?” he said. CC